Manga, a mirror of society

Japanese manga is now a global phenomenon, which developed after the Second World War. A veritable mirror of Japanese society, manga deal with a varied range of subjects like life at school and work, love, horror and, frequently, sport. Captain Tsubasa, Slam Dunk and the Prince of Tennis are just some of the sports manga that have gained a worldwide following, firing the imaginations of several generations and creating vocations for athletes like footballer Zinedine Zidane, tennis player Kei Nishikori and basketball player Rui Hachimura. With the Olympic Games approaching, and the focus turning to the culture of the host country, it therefore seemed only natural for The Olympic Museum to take a look at this characteristic feature of Japanese pop culture.

For this first podcast that kicks off the series entitled A la Croisée des Jeux, Théo, who is the events manager at The Olympic Museum, invited Stéphane Beaujean, the Curator of the Sport X Manga exhibition, to talk to us about how sports manga has evolved, and its deep roots within Japanese society.

Curator of the Sport X Manga exhibition at The Olympic Museum from 18 March to 21 November 2021. But that’s not all….
After obtaining a Master’s degree in comparative literature, Stéphane Beaujean was a part-time lecturer of methodology and French as a foreign language for the international relations office of Paris XIII University from 2002 to 2008. As well as managing the Aaapoum Bapoum second-hand bookshop in Paris, Beaujean was a journalist and cartoon critic for “Les Inrockuptibles”, the “Trois Couleurs” cinema magazine and “Chronicart”. He then became editor-in-chief of the bi-monthly “KaBoom” produced by Benoit Maurer. He was also co-Artistic Director of the International Comics Festival in Angoulême, France, from 2016 to 2020, and in May 2020 became Editorial Director for publishers Editions Dupuis.

Stéphane Beaujean tells us why sports manga is the most popular manga form in Japan and how sport uses the manga form to transmit its values and try to attract new people, starting with baseball and followed by martial arts.

Sports manga was in fact created to popularise sport in sports magazines, and to provide something different for baseball fans. Starting in March 1947, Shōnen Magazine published the first manga for children on baseball, including Batto-kun. The job of post-war manga was mainly to make the Japanese people, then under American occupation, aware of American values, hence the central role of baseball at the time. This explains why the cultural dimension features much more in sports manga than other adventure manga.

Then came martial arts manga such as Igaguri-kun. This reflected the resurgence of martial arts in the 1950s, after these had been banned by the occupying Americans. Judo thus made a comeback among children, in a more positive and sport-like form.

March 1959 saw the first weekly manga series, which marked the start of a new economic and editorial model that would go on to enjoy unrivalled success. Athletes featured on the covers, including sumotori Asashio III Tarō and baseball player Nagashima Shigeo from the Giants. Inside, there were in-depth features on baseball and sumo, plus, of course, manga chapters. This is how baseball manga Kyojin no hoshi became the defining work for a generation and helped to make Shōnen Magazine the first magazine to sell more than a million copies.
Beaujean describes how this emergence was thanks to sport, which transmitted values, and manga, which wanted to talk about sport.

In the 1960s a new world of the imagination appeared, a coming-of-age genre known as supokon. This new sports manga revived the values of pre-war children’s stories, with emphasis on typically Japanese values such as self-denial and achieving excellence. This rediscovery of identity was related both by sport and by manga, with Kyojin no hoshi and Ashita no Joe.

Beaujean thus reminds us how sports manga is a reflection of Japanese society by illustrating the changes in Japanese thinking in terms of the country’s relationship with the West, with discipline and with certain traditional values that were sometimes revived, sometimes rejected, and sometimes stifled by the American occupiers.

The Tokyo 1964 Olympic Games influenced the Japanese and revolutionised sports manga for the next decade. Beaujean tells us why.

The victory in the final by the women’s volleyball team, the Toyo no majo (Witches of the Orient), sparked a fascination with volleyball among the Japanese. Immediately afterwards, women’s magazines launched a women’s volleyball series with the Attack No. 1 manga, which dramatically changed the way the female body was represented. This in turn influenced all the other romance manga that were centred on how women were depicted.

The second key event was the defeat in the men’s judo final of Japan’s Akio Kaminaga by Dutchman Antonius Geesink. This defeat for Japan, in Japan, in its oldest and most archetypal sport, sent shockwaves through the country, reviving painful memories linked to the racist prejudices that had been prevalent during the American occupation. 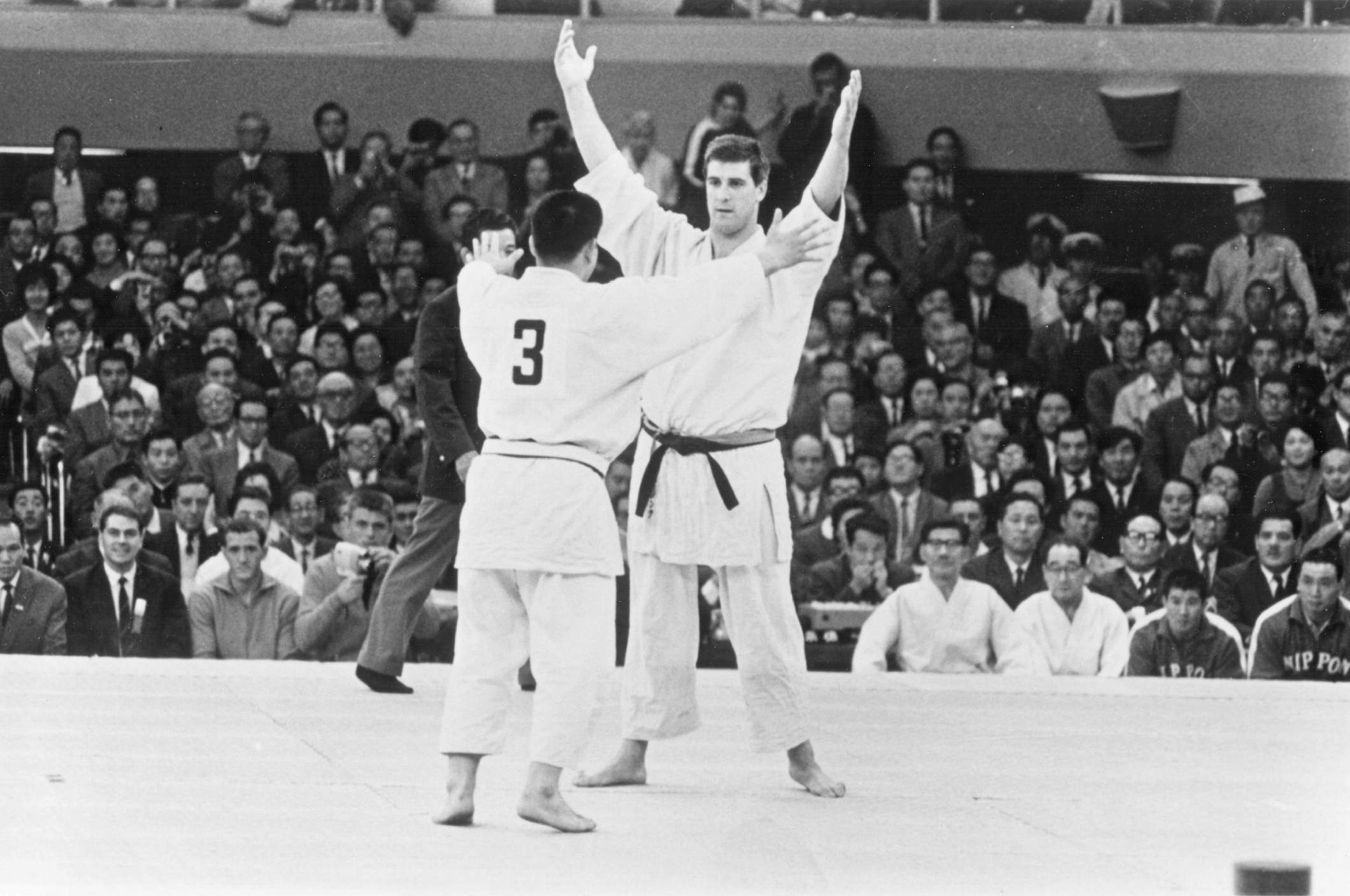 Revenge took the form of a series of manga featuring foreign sports in which the stories’ heroes excelled. One example is Ashita no Joe, in which a young drifter discovers boxing and gradually makes a name for himself.

Beaujean regards this as the moment which triggered the increasingly strong and complex dialogue between the presence of sport in Japanese society and manga.

The creation of manga led to anime. When Osamu Tezuka created his first animation studio in the 1960s, he opted for a televised adaptation using a system of animation that already existed in America. He was influenced by The Flintstones, which used a small number of images per second and proved very popular in a culture in which “still movement” is an integral part of movement.
These anime series immediately increased the popularity of manga and attracted brands and sponsors. Thus was born a happy combination of sport, television, manga and animated cartoons.
Star of the Giants (Kyojin no hoshi) was adapted into an anime television series and became a huge hit, driving manga sales even higher. As well as getting more people to buy manga, the series helped to make baseball even more popular.

Manga in the social and political imagination

In the 1960s, the Ashita no Joe manga resonated with students and encouraged them to think about their political aspirations. It was then, Beaujean explains, that Japanese society, publishers and mangaka became aware that manga was for adults, too, and could influence the social and political imagination of the whole of society.

In episode #2, discover the next part of the fabulous history of sports manga told by our specialist, Stéphane Beaujean.

The Sport X Manga exhibition can be seen free of charge at The Olympic Museum until 21 November 2021.