The Sport X Manga exhibition at The Olympic Museum, running from 18 March to 21 November 2021, explores the intrinsic relationship that sports manga has enjoyed with Japanese sport and society from 1945 to the present day. The action-packed, dynamic nature of sport has served as a major source of inspiration for mangakas, or Japanese comic book artists.

The Olympic Museum invites you to learn more by hearing from three famous mangakas (URASAWA Naoki, the author of YAWARA!; CHIBA Tetsuya, the author of Ashita no Joe ; and Yoichi TAKAHASHI, the author of Captain Tsubasa) and renowned manga editor SUZUKI Haruhiko. Read on to immerse yourself in the intimate process of manga creation.

Urasawa Naoki is a Tokyo-based mangaka who has created a large number of manga, including Happy! and 20th Century Boys. His work, now published in at least 20 countries, has won numerous national and international awards.

With YAWARA!, Urasawa created a different type of heroine and sports manga – reflecting the heyday of the economic boom in the 1980s. Yawara Inokuma is a high-school student whose grandfather, a living judo legend, has been training her since she was a little girl, with the aim of her winning gold at the 1992 Olympic Games. This manga made such an impression that, when judoka Tani Ryoko (née Tamura Ryoko) won silver at the Games in Barcelona, the Japanese public and media nicknamed her after the manga heroine. Urasawa recalls that period:

“When YAWARA! came out, I wanted to write about things that were realistic. Not show a man being thrown into the air against a wall, but real judo techniques. At the time, from a social standpoint, it was important for women’s judo to become an official Olympic event. I wrote YAWARA! after studying the rules, the techniques and even the atmosphere at competition venues. I heard about Tamura Ryoko for the first time when I was in my studio watching the International Judo Championships in Fukuoka. There she was, winning bout after bout. The crowd were chanting “YAWARA! YAWARA!”, and I wondered what they were doing.” 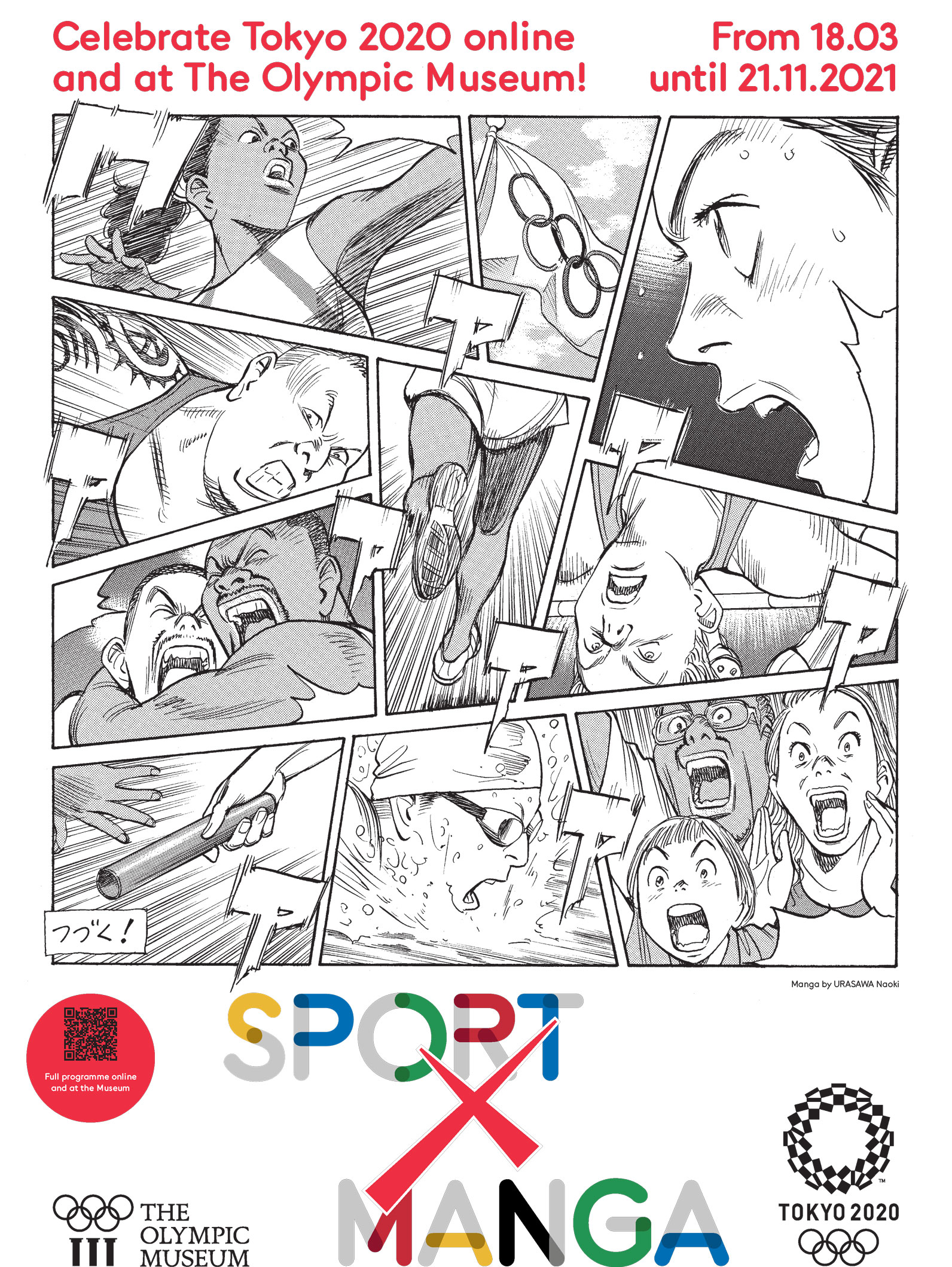 “Sports manga are a particularly popular form of Japanese manga. They appear in weekly magazines, and the matches described generate even greater passions than “real” sport. In this poster, I have concentrated the whole essence of Japanese sports manga. In the bottom-left box, you can see the text meaning “To be continued!” Because, in real manga, readers have to contain their impatience for a whole week to find out what happens next.” – Urasawa Naoki

Urasawa also designed one of the 20 artistic posters for the Tokyo 2020 Games. This series of posters illustrates the full range of genres and styles in Japanese culture, for which Urasawa, one of the most famous manga artists in Japan, is the perfect ambassador. 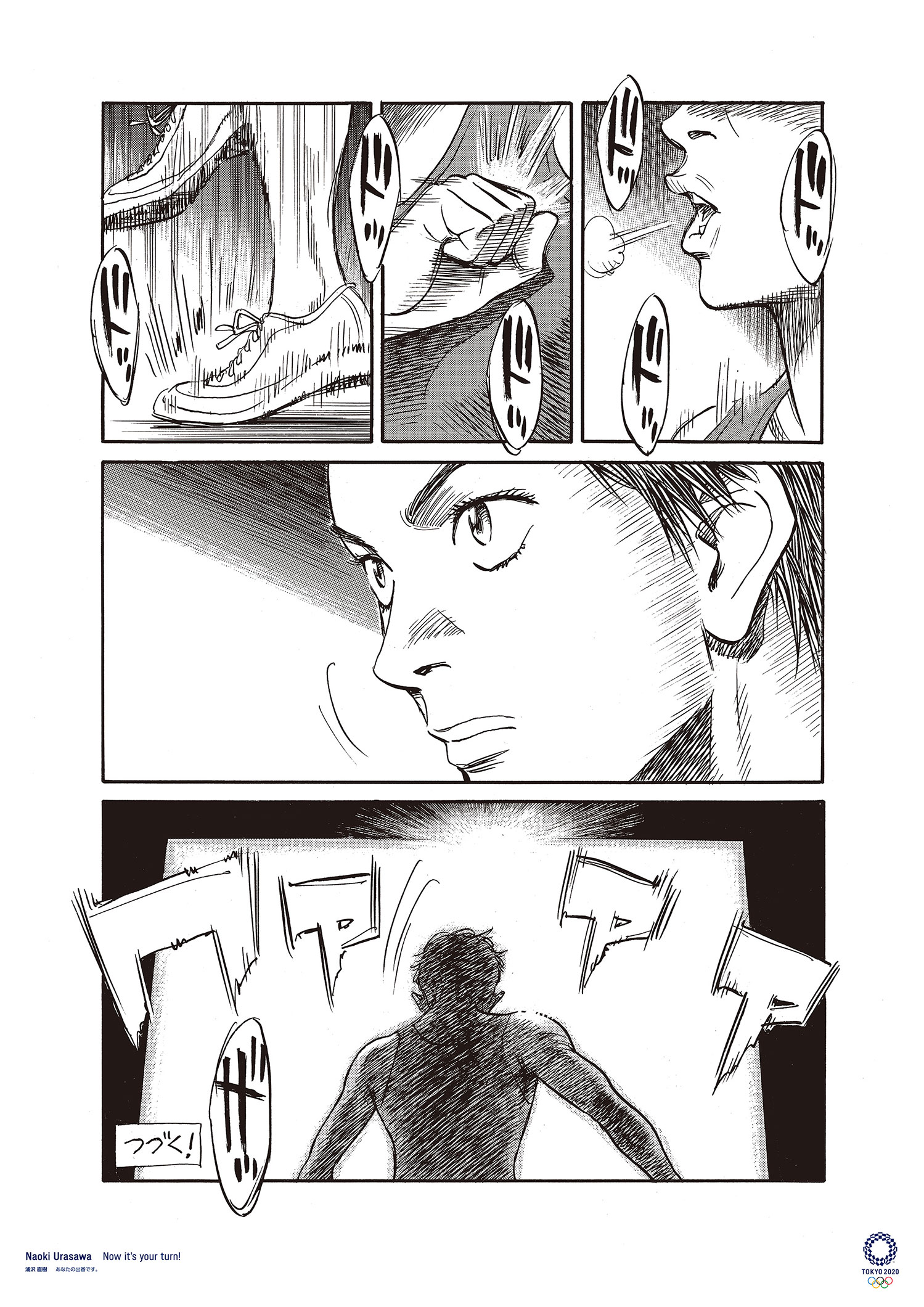 Urasawa divided up his poster into panels, as on the page of a comic book, and once again included the “To be continued!” box like real manga, which keep readers in suspense for the next issue.

On Saturday 12 June 2021, as part of the Museum’s 24 Hours of J-Pop event, which will feature day- and night-time entertainment centred on manga culture and Japanese pop culture, you can attend an online talk by renowned mangaka Urasawa Naoki!

Yoichi Takahashi prefers for his name to be written in the Western style, with the given name preceding the family name. He had an enormous impact on both manga and sport in the 1980s with Captain Tsubasa. The manga tells the story of Tsubasa Oozora, a young football prodigy who goes from club to club and becomes a global star. Captain Tsubasa is the most well-known sports manga in the world. Not only was it directly responsible for a boom in the popularity of football in Japan, but it also helped popularise manga culture abroad, finding huge success outside the country. Captain Tsubasa has sold over 80 million copies worldwide.

Takahashi reflects on the extraordinary success of a character whose adventures continue to this day.

“At the time, football wasn’t particularly popular in Japan, and we didn’t have a professional league. Matches weren’t shown live on TV very often. So when I first started with Captain Tsubasa, I didn’t know whether it would be very successful. I thought that other people in Japan might enjoy football, so I tried to write a football manga.”

And he explains the formula he used to win over readers:

“One of my methods is to use a more stylised than realistic depiction of existing football techniques. Some of them are also inspired by other sports, while others are simply taken directly from football, like the bicycle kick. I invested all my hopes in my manga. I think my manga helped boost the popularity of football in Japan by introducing the sport to children. Nowadays, it’s perfectly normal to see Japan compete in the World Cup.”

At the Olympic Museum’s Sport X Manga exhibition, running from 18 March to 21 November 2021, see how you measure up to Captain Tsubasa by trying out one of his famous moves, the Drive Shot! 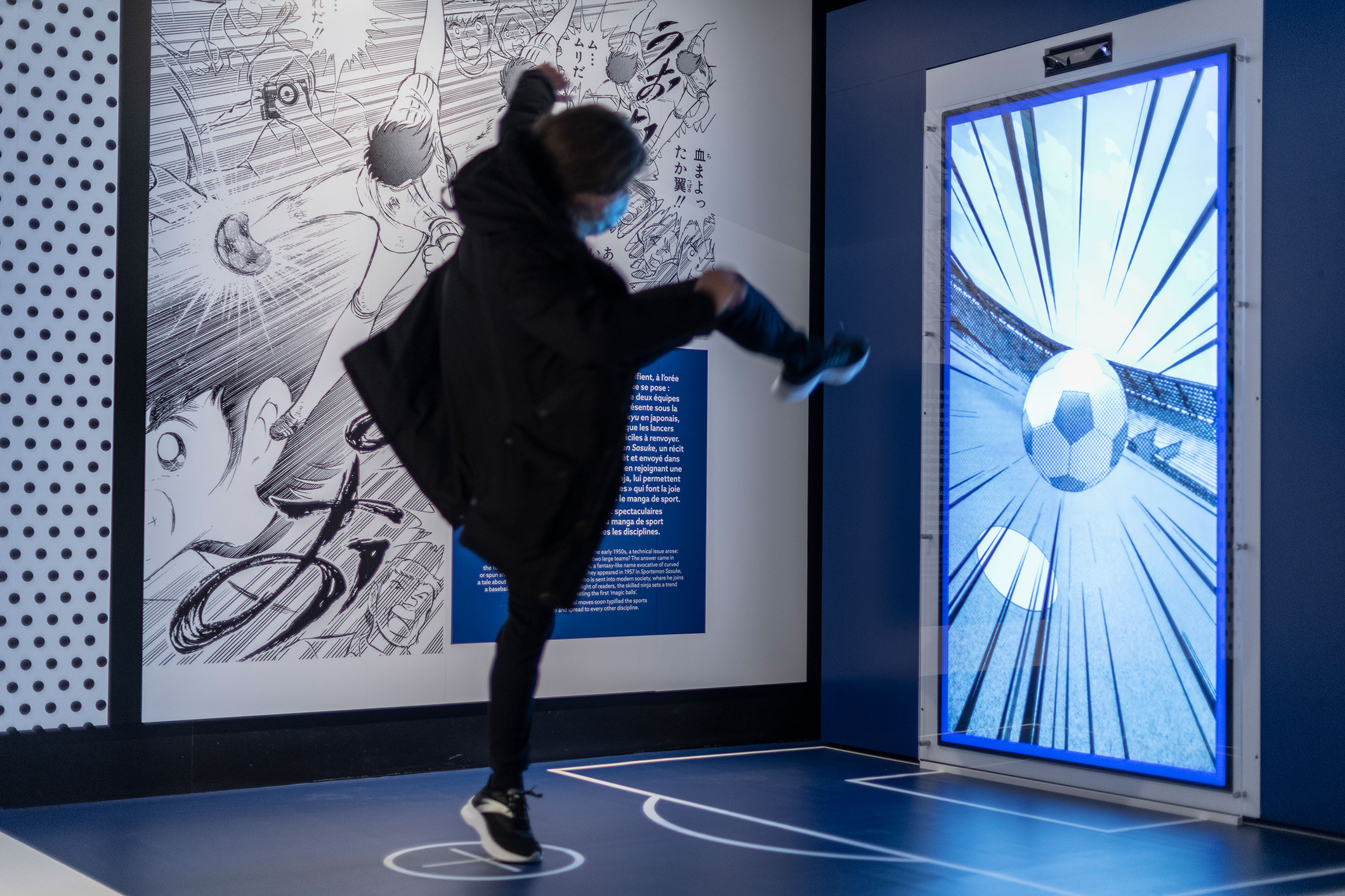 Chiba Tetsuya is a renowned mangaka best known for illustrating one of the all-time classic sports manga, Ashita no Joe. In the late 1960s, Chiba and manga writer Kajiwara Ikki were key figures in the emergence of the supokon sports manga genre, where the hero has a strong determination never to give up. Together, they created a character who would go on to become the embodiment of his period and strike a chord with young adults – something the two mangakas could never have foreseen.

Yabuki Joe, 15, lives on the streets and eventually ends up in a juvenile detention centre. There, he meets professional boxer Rikiishi Torû, who soon becomes his rival and serves as his main motivation to become a professional boxer himself.

Chiba reflects on how the creative process for Ashita no Joe affected him, and the way that fiction and reality sometimes blur together:

“My first manga was about baseball. I then moved on to illustrating the world of boxing [with Ashita no Joe]. When I was feeling tired, it immediately affected the way I drew the character’s muscles. So I told myself I needed to keep in shape. When the character lost weight, I also subconsciously lost weight. I was tied to what my character was feeling, so it was a difficult job for me.”

Ashita no Joe was a phenomenal success, to the extent that when Rikiishi, Joe’s rival, died in volume 6, there was an outpouring of grief among readers. To placate them, the publishing house held a funeral service for the character at its headquarters. Chiba explains:

“I depicted Rikiishi losing weight and getting thinner and thinner. In my mind, his death was a natural result of what was happening to him and I portrayed it realistically, but readers were shocked. When I attended his [Rikiishi’s] funeral, I saw people dressed in black, holding flowers and gifts of condolence. I was surprised because I never thought that readers felt so emotionally about manga characters. I didn’t change the way I drew, but I became more aware of what I was doing. I started to think seriously about the effects my manga were having. But I realised that I could talk about life, encourage readers and even fuel their desire to live. The work became more gratifying for me.”

In the late 1960s, as student protests broke out in Japan, the manga’s influence on public attitudes became evident. Joe, the poor boxer fighting to improve his social standing, appeared on banners brandished by some of the factions.

Suzuki Haruhiko is one of the top editors at Shōnen Jump manga magazine, published by Shueisha. In the 1980s, he worked with, among others, mangaka Takahashi Yoichi on the series Captain Tsubasa. During that time, weekly sales of the magazine soared, going from three million to five million in less than 10 years (the magazine’s circulation reached 6.5 million per week in 1994).

Suzuki tells us about the golden age of Japanese comics, in which he played a major role:

“I joined Shueisha publishing house in 1978. I was in charge of Captain Tsubasa and was very happy when I learnt that it was popular in other countries. I could never have imagined that something so remarkable would happen when I started working in manga. The most popular sport in Japan had been baseball for a long time. That’s why so many Japanese artists had created baseball manga. Then Captain Tsubasa came out, and primary school children started playing football. Junior football became very popular.”

Talk of the narrative construction of Captain Tsubasa inevitably leads to mention of pioneering mangaka Tezuka Osamu, who laid the foundations for modern manga from 1945: film industry terms were soon being used to refer to modern manga narrative techniques, including low- and high-angle shots. The dynamic nature of manga sets it apart from the two other major comic book industries, Franco-Belgian and American.

Today, manga is recognised as having as great a promotional effect as television broadcasts or press articles. Suzuki also recalls manga’s influence on sport:

“Sport has contributed enormously to manga: baseball, judo, kendo, football, basketball, tennis, golf, cycling and American football. It’s difficult to find a sport that hasn’t been depicted in manga, which tells you to what extent manga have used sport as subject matter. But manga have also had an impact on sport. Sometimes readers get influenced by a manga and take up the sport, or a manga boosts the number of fans of a given athlete or sport. So sports manga also contribute to sport. It’s a win-win situation, which is fantastic.”

Understanding sport and its values through manga

Sports manga provides a window into the history of Japan, from the post-war period to the present day. It has influenced the practice of sport, inspired young people and drawn on the stories of real-life athletes. It therefore serves as an essential source of information to understand aspects of Japanese society and its relationship with sport.

The mangakas’ talent also lies in the way they depict sport. An extensive visual register of sporting movements and action is used for both educational and entertainment purposes. This manga-specific visual vocabulary can be harnessed to provide new insight into the world of sport. Using a wealth of imagery, sports manga showcases the psychology of its characters and the values that drive them. And it has produced heroes who have become etched in the collective psyche, far beyond Japan’s borders.

To find out more, come and visit the Sport X Manga exhibition at The Olympic Museum, running until 21 November 2021.

An artistic performance on Ma