In order to take part in the competitions in Antwerp in 1920, the American team set out across the Atlantic, a journey that took several weeks at the time. 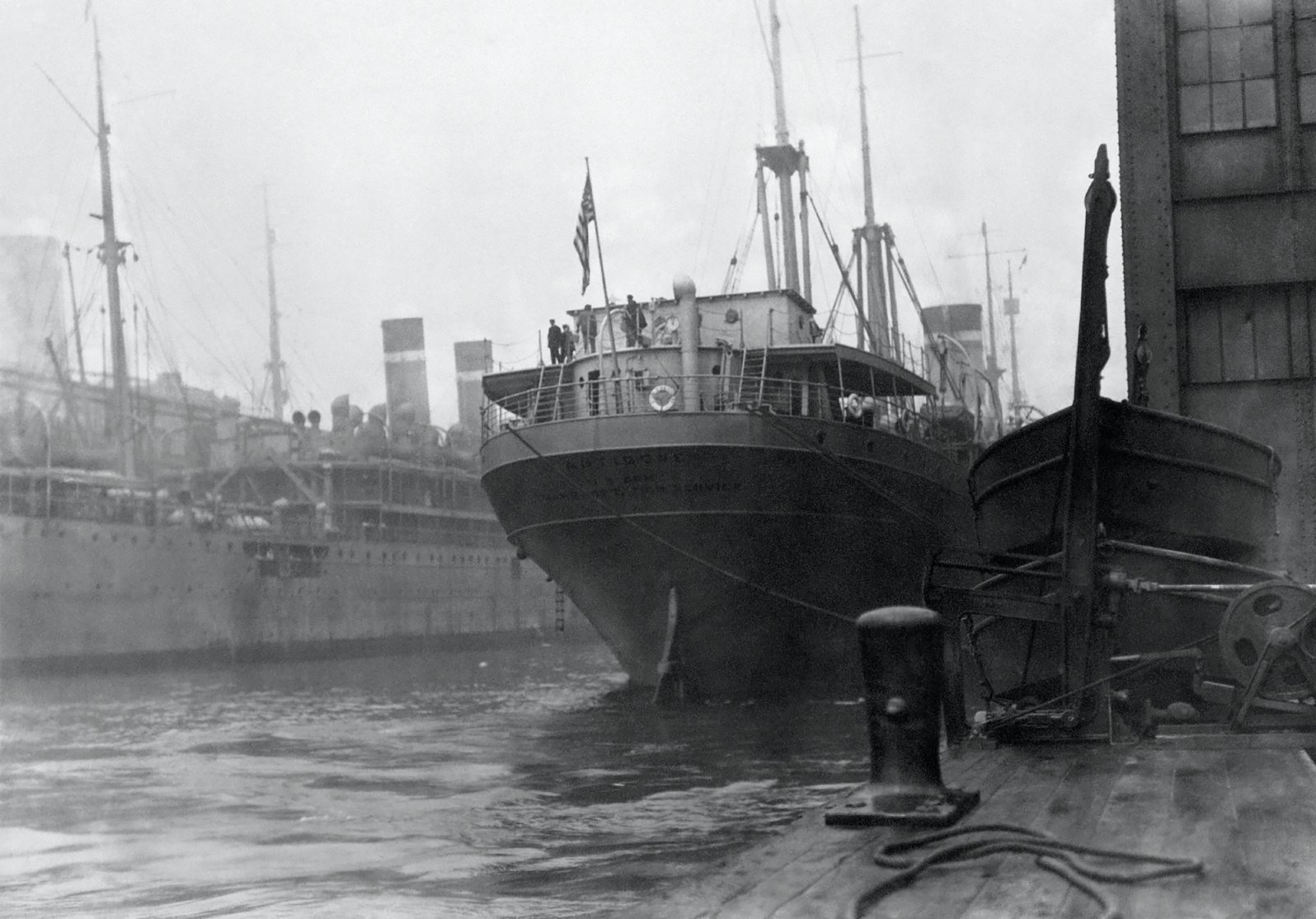 One of the athletes on board was diver Aileen Riggin, who would go on to win the gold medal.
This was a remarkable feat for someone who had taken up swimming only a few years earlier, on the recommendation of her doctor, to treat health problems. 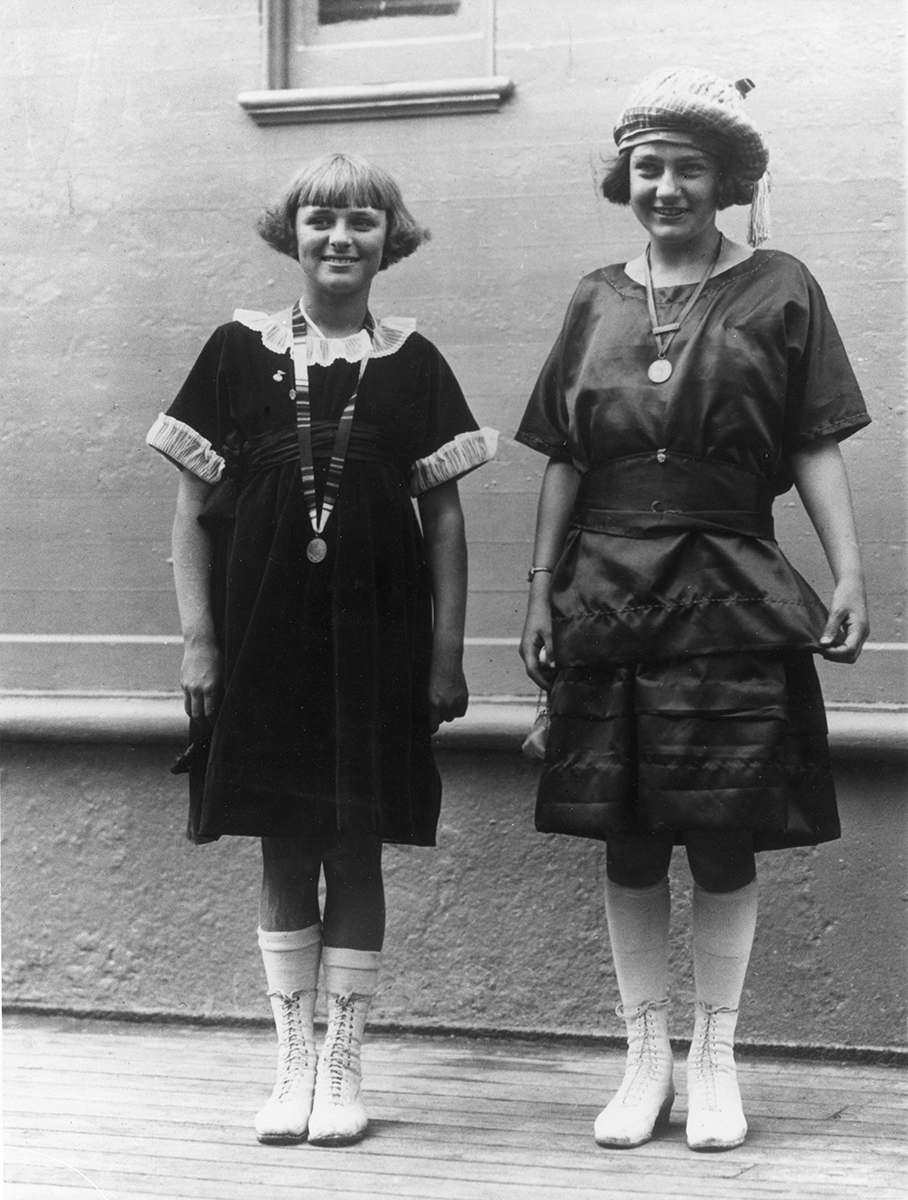 Aileen is on the left with Helen Wainwright, another diver. © IOC

In an interview, she recalled:
“It took us 13 days to get to Europe, so we had plenty of time to get adjusted to the ship.” 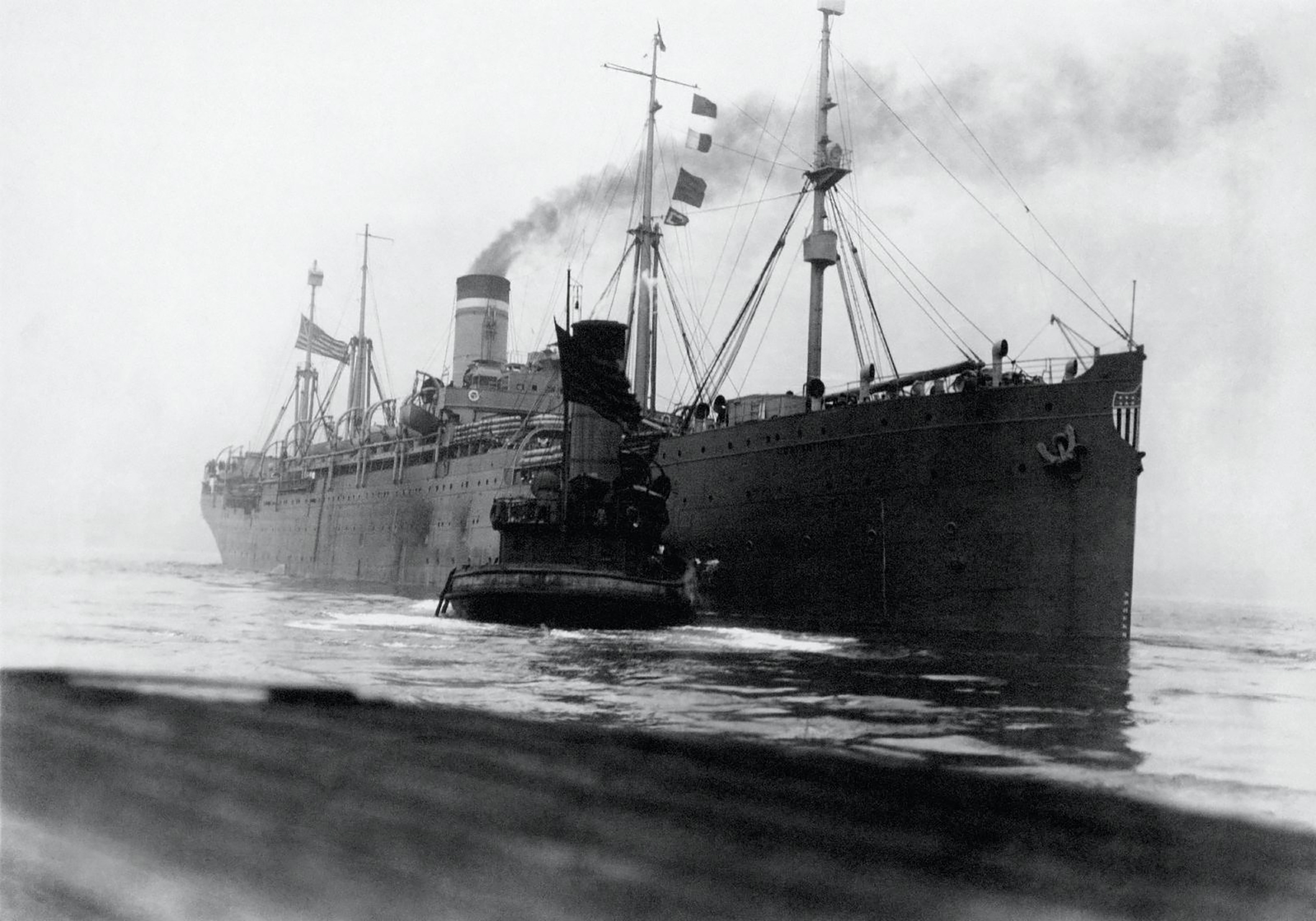 The Princess Matoika on the open sea. © IOC

On board, the time passed slowly for the athletes, who were anxious to maintain their physical fitness and eager to compete at the Games. 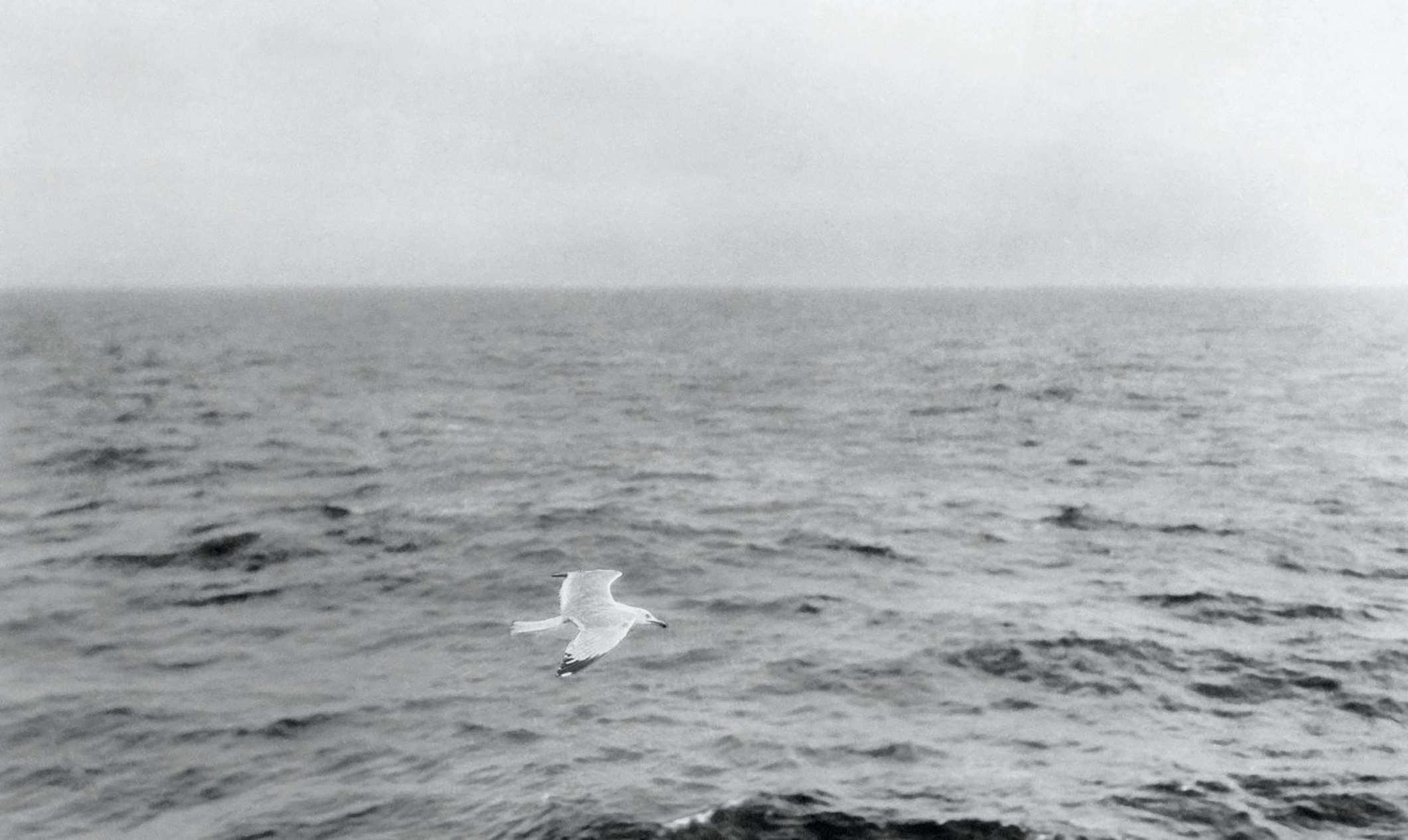 The horizon with the ocean stretching out as far as the eye could see for those on board. © IOC

ALL HANDS ON DECK TO KEEP FIT

But despite the far from ideal conditions, they found ways to train, such as using this canvas tank as a swimming pool. 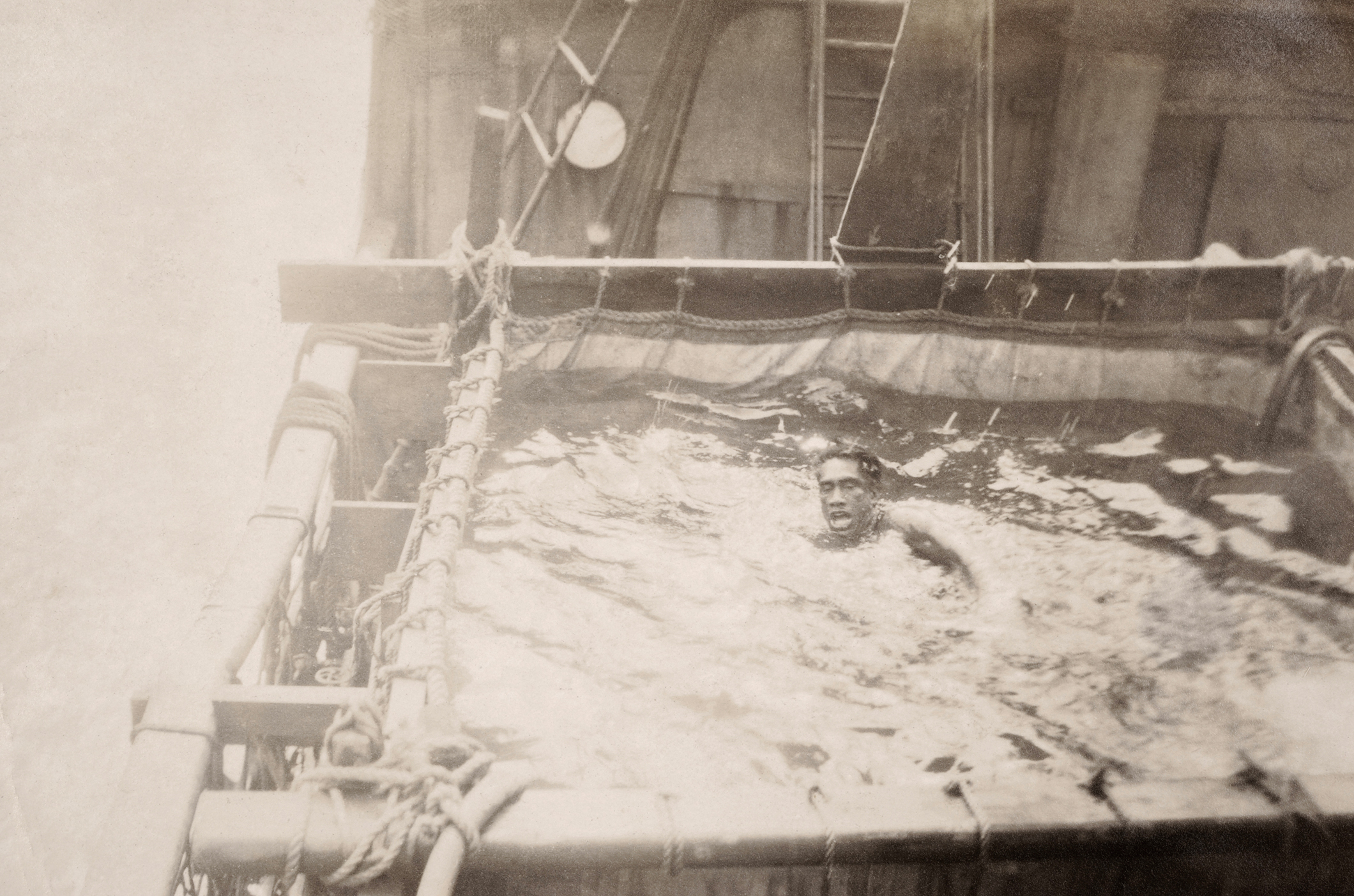 Riggin said:
[…] It was just long enough for a tall man to stretch out with his arms outstretched. We had some tall swimmers, so it must have been about 7 or 8 feet long, and not quite as wide.”

She also described some of the other improvised training methods for various disciplines:
“The javelin throwers had a rope attached to their javelin, and they’d aim out to sea. It was a little nerve wracking. We weren’t sure just where that javelin was going to come down. […]

[…] The other men set up places on the ship for their sports.
They put down cork on the decks to make it possible to run without slipping. And they would jog around the decks to try and keep in form.
They set up a boxing ring and the boxers would work out.
The fencers had a strip where they could work out. […]

[…] some of these athletes were in the modern pentathlon. Shooting was one of the events in that contest, so they were fidgeting.
They wanted to shoot at the seagulls which followed us […]. But they restrained themselves.
They were generally setting up exercises for everybody who wanted to take them.”

Space was limited on the boat, but everyone tried to find ways to adapt to the situation. © IOC

Just like their counterparts of yesteryear confined to the Princess Matoika, the athletes confined to their homes today during lockdown due to the coronavirus pandemic have not given up.
They are training wherever they can to stay physically and mentally fit, set an example and prepare for the Tokyo 2020 Games!

Creativity and determination are still very much on display, as evidenced by the athletes participating in the IOC’s “#StayActive #StayStrong #StayHealthy” campaign, which aims to encourage everyone to get moving, stay united and stay together. 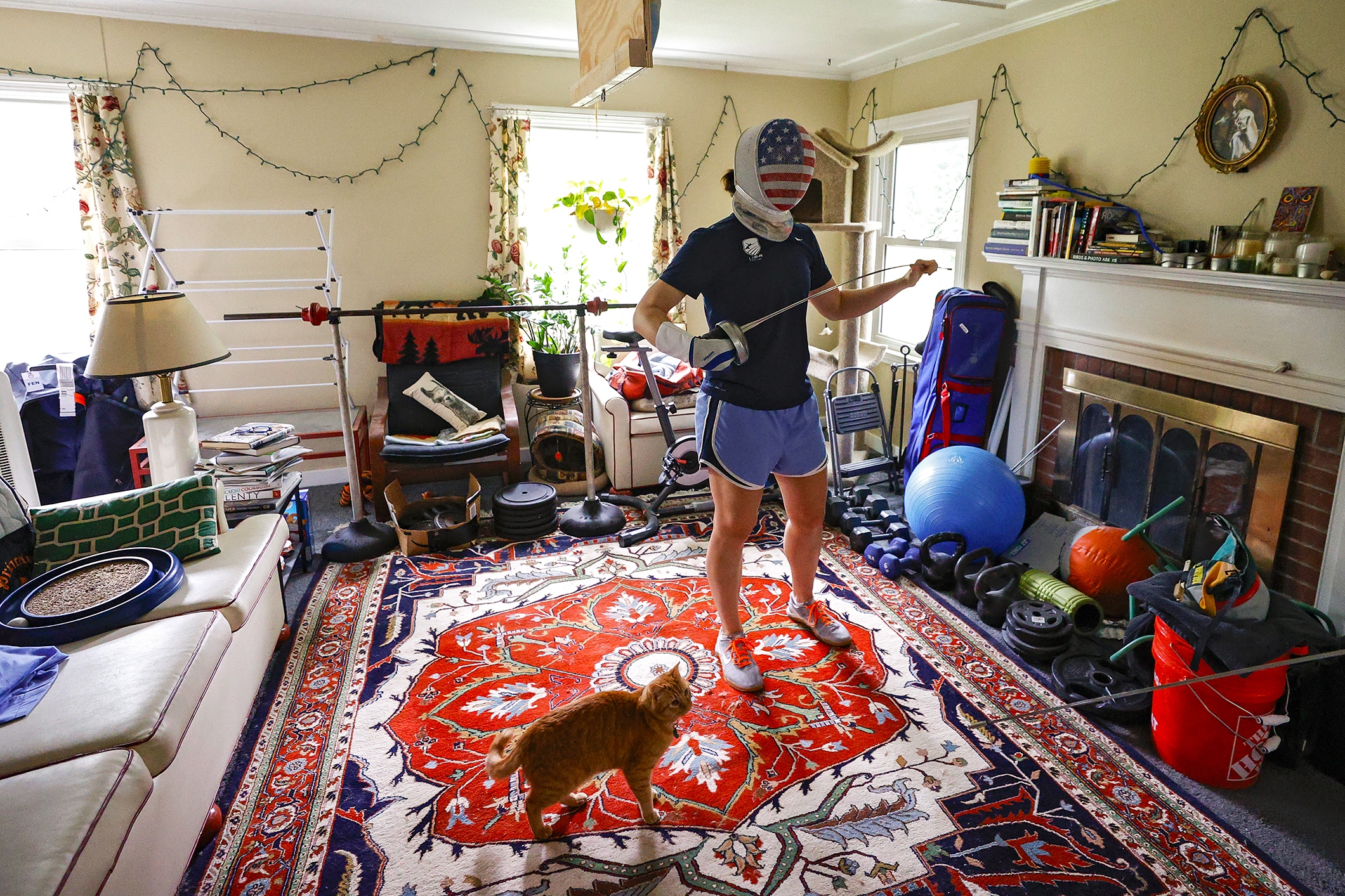 Fencer Katharine HOLMES (USA) in her living room, with her cat watching on. © Getty