Each edition of the Olympic Games provides an opportunity to have new sports disciplines included on the Olympic competition programme. One hundred years ago, at the post-war Antwerp 1920 Games, certain disciplines stood out, whether because they were new or making their last appearance, because of their scheduling, or simply due to certain athletes who created a buzz at the time and went down in posterity.

Read about the inspiring stories from 1920 through the Olympic patrimony archives!

The Antwerp Olympic Games were held from 20 August to 12 September 1920, but in reality, they began earlier, in April 1920, with the figure skating and ice hockey competitions. The Antwerp Games were therefore the only Summer Games in history to feature hockey players, complete with their sticks and puck. The Winter Games did not yet exist, and would be established only in 1924!

Out of the seven teams in the running, Canada, represented by the Winnipeg Falcons, won the tournament easily, thanks to their three victories against Czechoslovakia, the USA and Sweden. Switzerland returned home empty-handed. The Swiss players, despite their great experience, turned up in nifty white shorts with very little protection. The goalkeeper also wore his best tie during the events!

These new events were staged in the Antwerp Ice Palace. It was small, but highly elegant, and offered spectators the opportunity to sit at tables to watch the matches and enjoy a glass of wine while listening to music played by an orchestra! 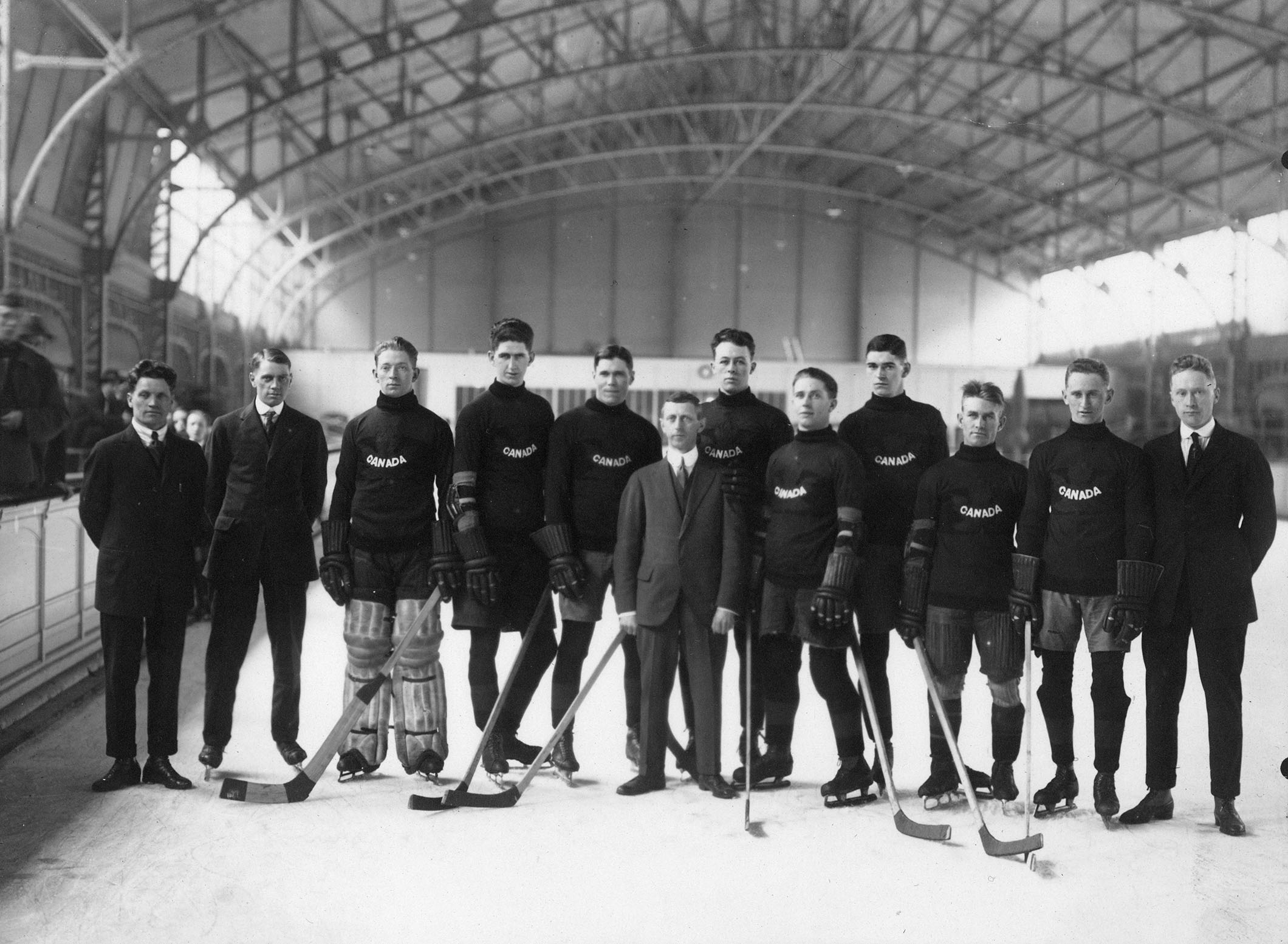 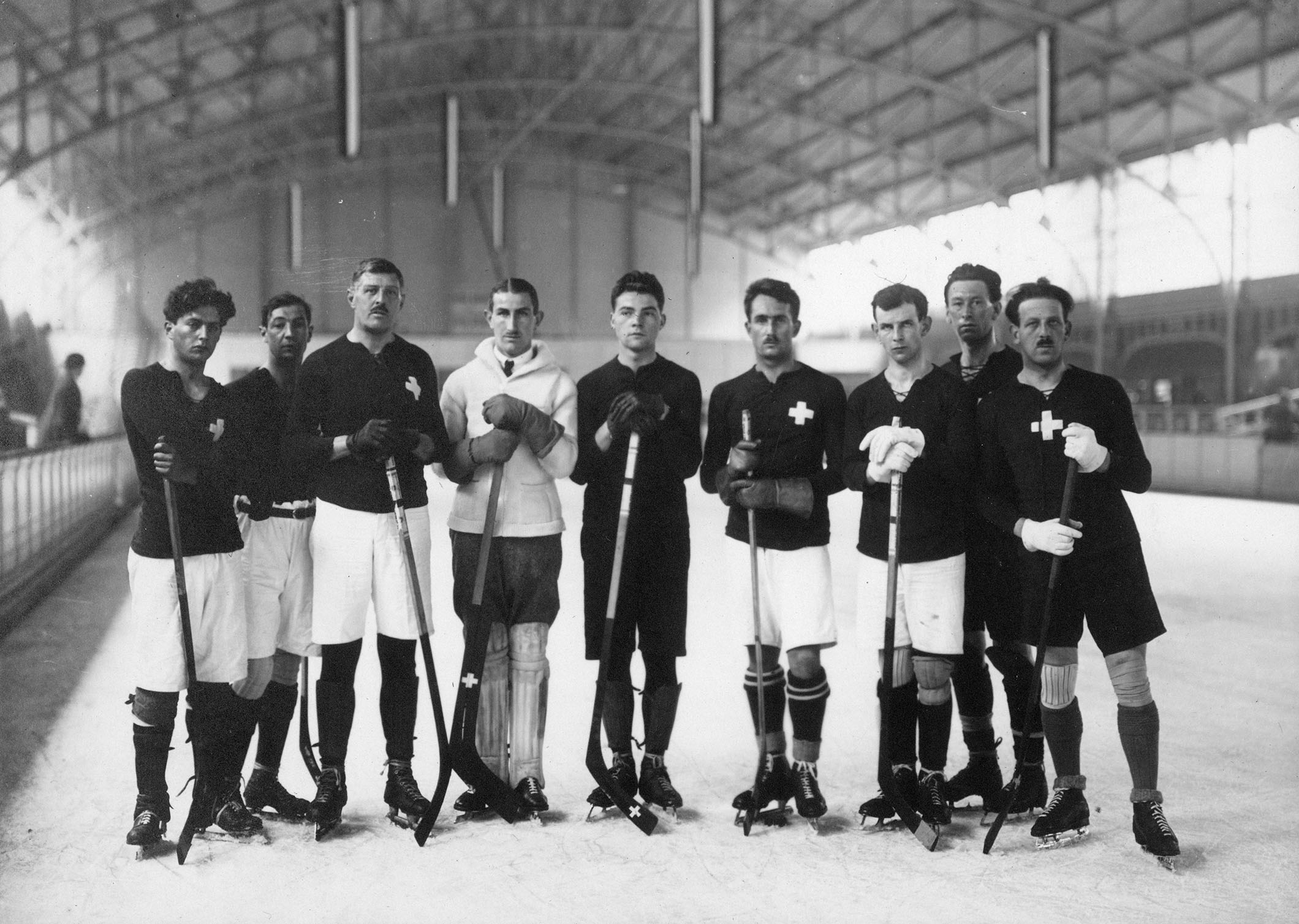 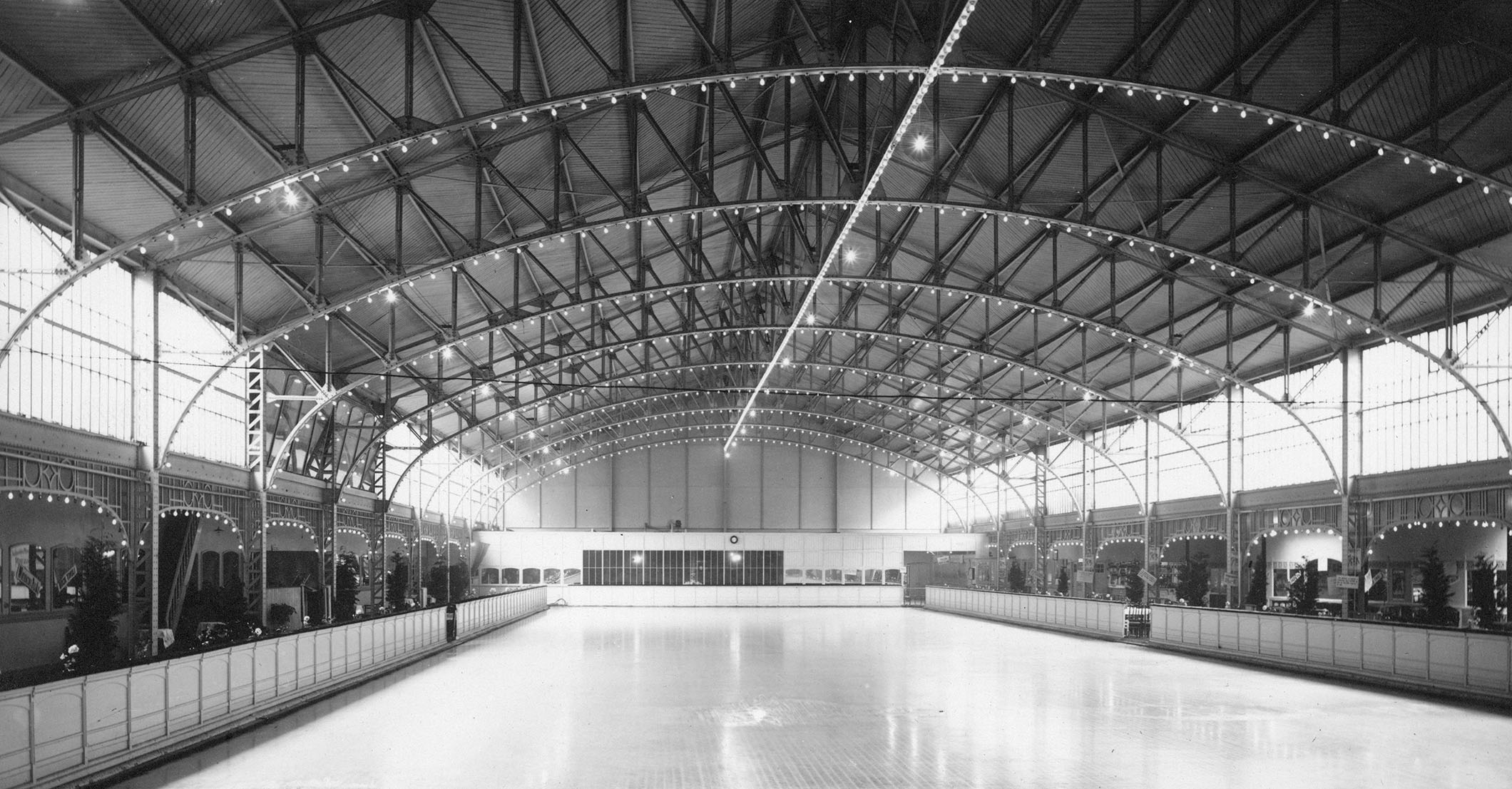 Duke, the swimming champion and father of surfing some 100 years ago

At Antwerp 1920, “the Duke”, as he was commonly known, retained his 100m freestyle title and added a third gold medal to his haul in the 4x200m freestyle relay. In 1920, Duke also represented the USA in water polo. 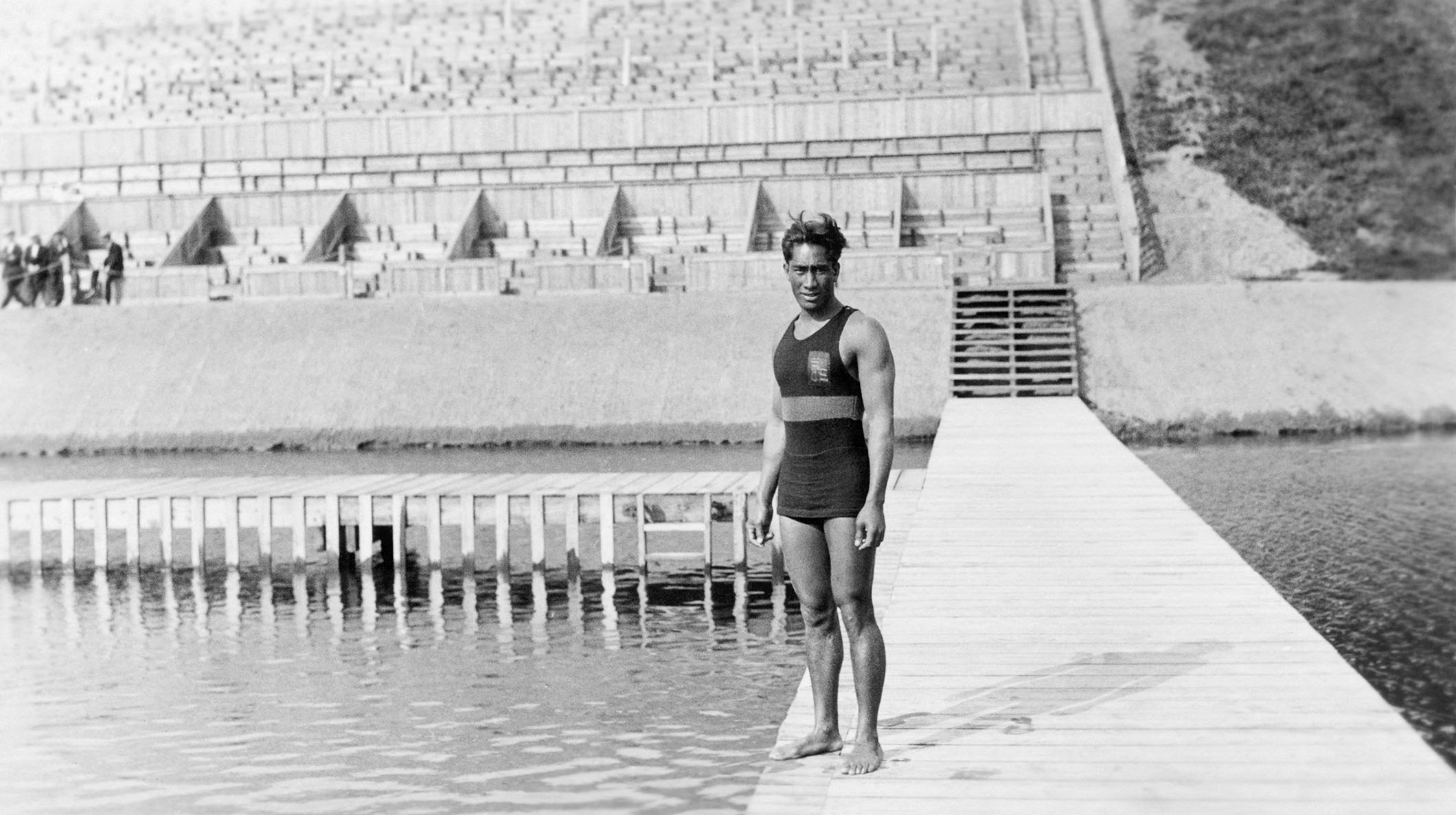 Kahanamoku returned to the Games in 1924 and finished second behind Johnny Weissmuller (USA), who famously went on to play Tarzan, in the 100m freestyle. Duke’s brother, Sam, finished third in the same race.

Between participating in the two Games, Duke, who also loved surfing, travelled the world to present and promote the sport. It was how, to add to his many other nicknames, he also came to be dubbed the “father of surfing”. Later, Kahanamoku played supporting roles in 28 Hollywood films.

Today, 100 years later, surfing, a sport invented in the Pacific Islands, is about to become an Olympic sport at the Tokyo 2020 Games. Surfers from across the world will come to Tsurigasaki beach, which will host the surfing events at the Games of the XXXII Olympiad in Tokyo. Over a century later, Duke’s dream to see surfing at the Games will finally come true! 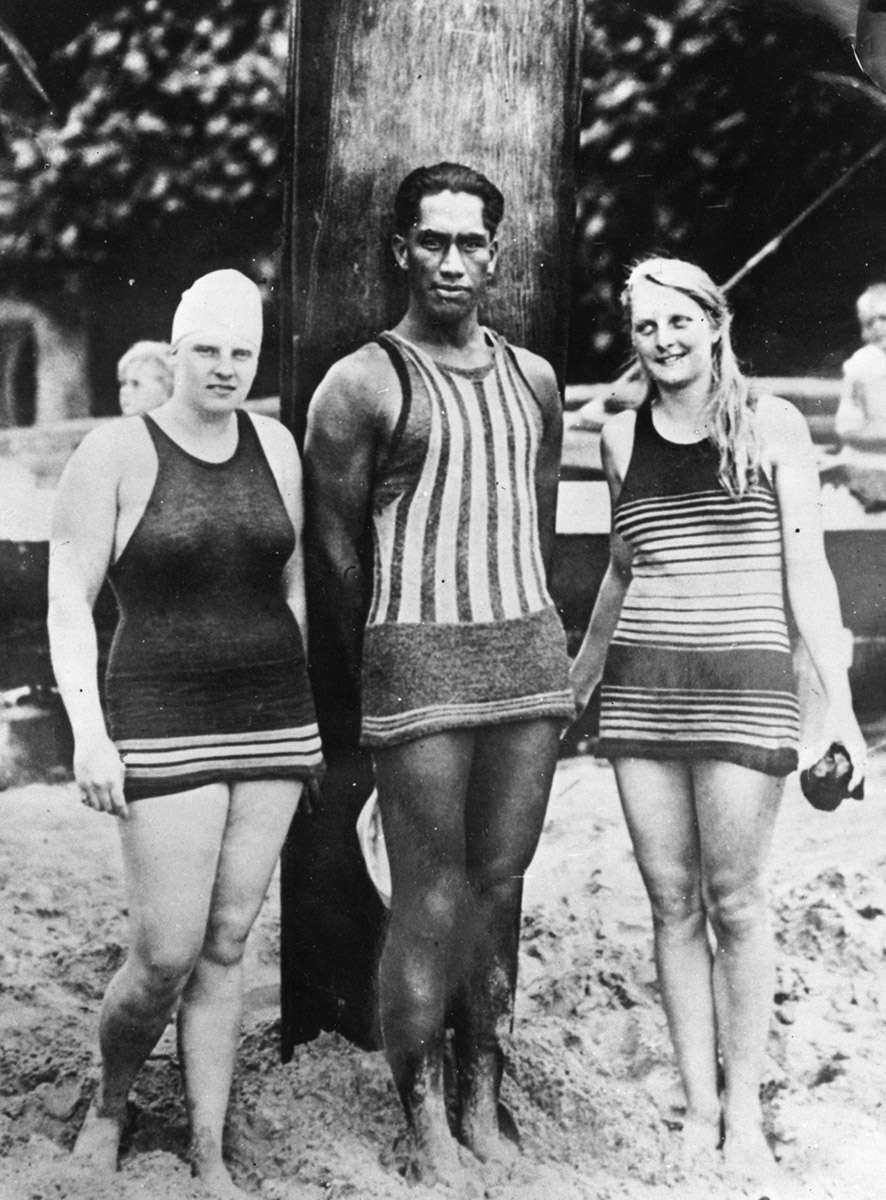 Ethelda Bleibtrey (USA), a swimming champion who cut through the clothing conventions of the time

In 1920 in Antwerp, in addition to the 100m freestyle and the 4x100m relay, a new event was added to the programme: the 300m freestyle. America’s Ethelda Bleibtrey, aged 18, won all three events with a world record in each distance to boot!

Ethelda Bleibtrey (USA) posing for a photo at the end of her race. © IOC

However, her story goes further. She began to swim aged 15 to treat her polio. Bleibtrey contributed to women’s emancipation: in 1919 she decided to swim at a Californian beach without wearing stockings as US women had to in the post-war era. She was arrested, but public opinion supported her: and it was finally decided that women could swim without having to cover their legs! 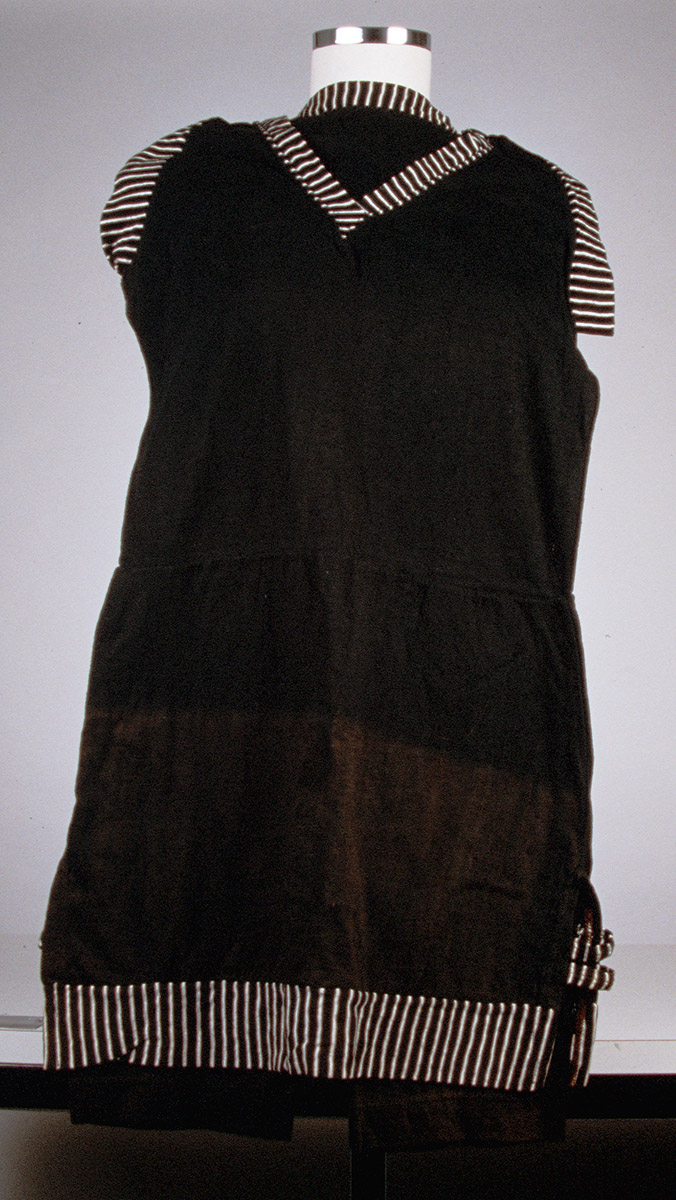 Swimsuit that belonged to a US swimmer, dating from the 1910s. The first swimsuits were extremely heavy, but from the 1910s, the costumes reaching the neck and knees left the arms and legs exposed. Machine-knitted or cotton swimsuits were lighter to wear, and the term “swimming costume” was coined in 1913. International Olympic Committee Archives. © CIO 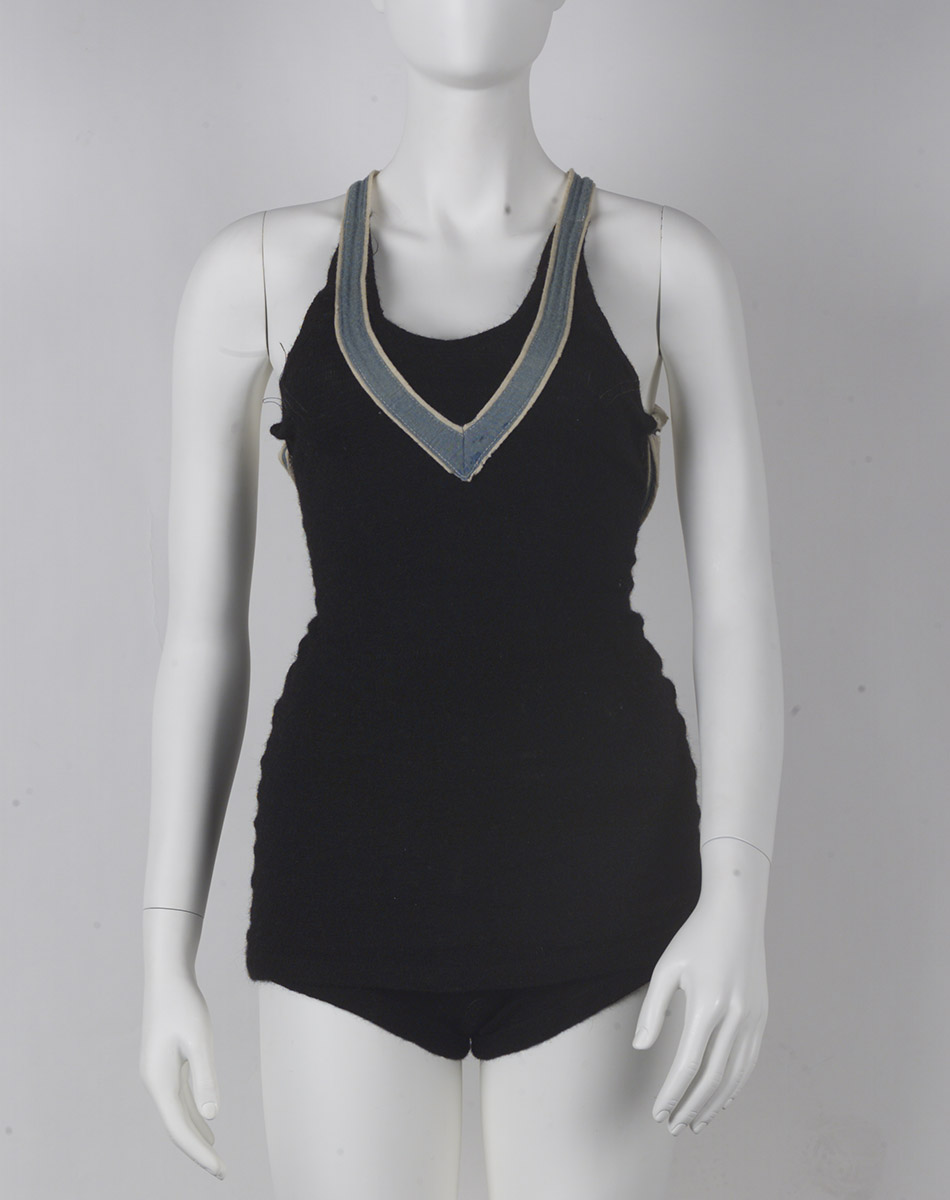 In Antwerp, on the whole, female swimmers wore body-covering swimsuits in dark colours made mainly of wool. They were strongly encouraged to wear bathrobes. The cotton swimsuits provided by the American Federation covered the upper arms and the legs down to the knees. That was why the US swimmers preferred to take their own swimming gear, insisting that these official swimming costumes significantly compromised their performances. Bleibtrey wore a swimsuit that appears different in texture from a woollen one. 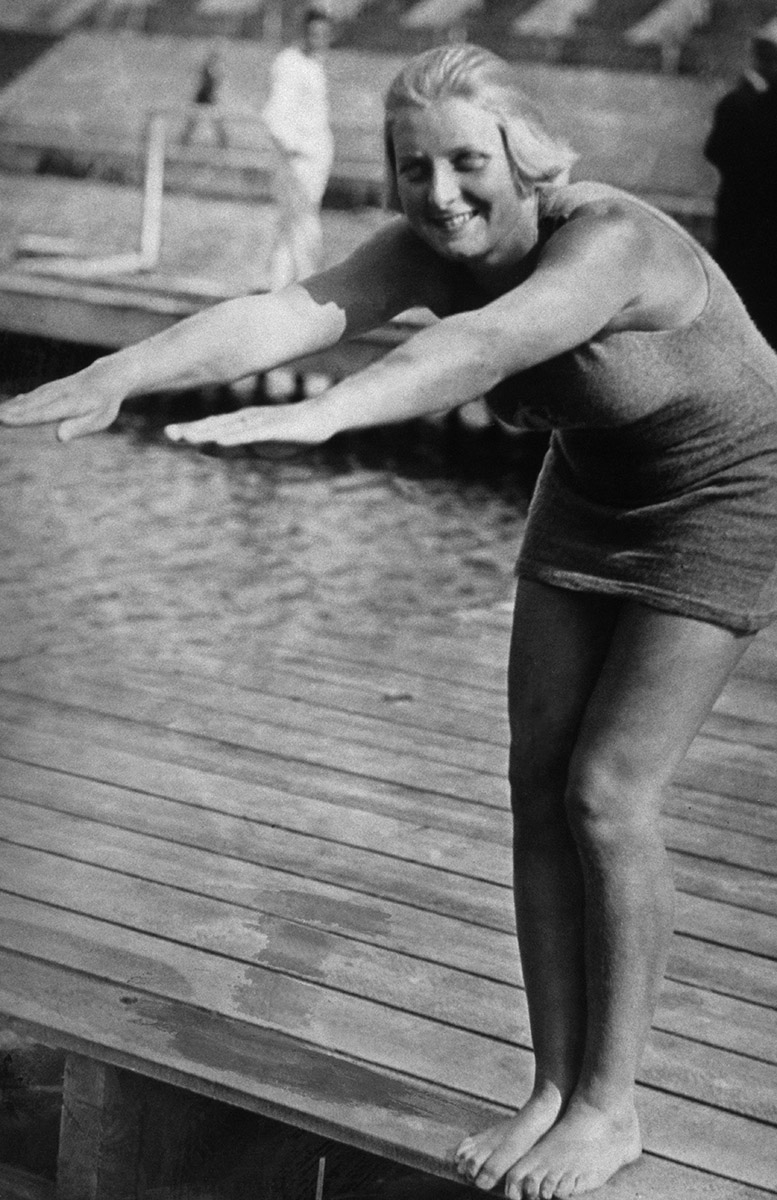 Ethelda Bleibtrey (USA), Olympic champion in the 100m, 300m and 4x100m freestyle. Ethelda’s swimsuit stands out for being a shinier and synthetic fabric. © IOC

Later, Bleibtrey devoted a large part of her life to teaching swimming to children with a disability and became a nurse in 1959 for older people with impairments.

Tug of war staged for the last time at the Games

From 1900 in Paris to 1920 in Antwerp, tug-of-war competitions, inspired by ancient events, were on the Olympic programme.

The rules were simple: two teams of eight athletes held two ends of a long rope. Two lines were traced in the ground, four or five metres apart. The aim was to pull the rival team over the line or make them fall over. Duels lasted five minutes at most. If no team crossed the line, the team that had pulled the other closer to the line was declared the winner. Contests were held over two rounds.

At Antwerp 1920, the winning team was from Great Britain. It was made up of members of the London police force and easily won against the four other teams in contention. 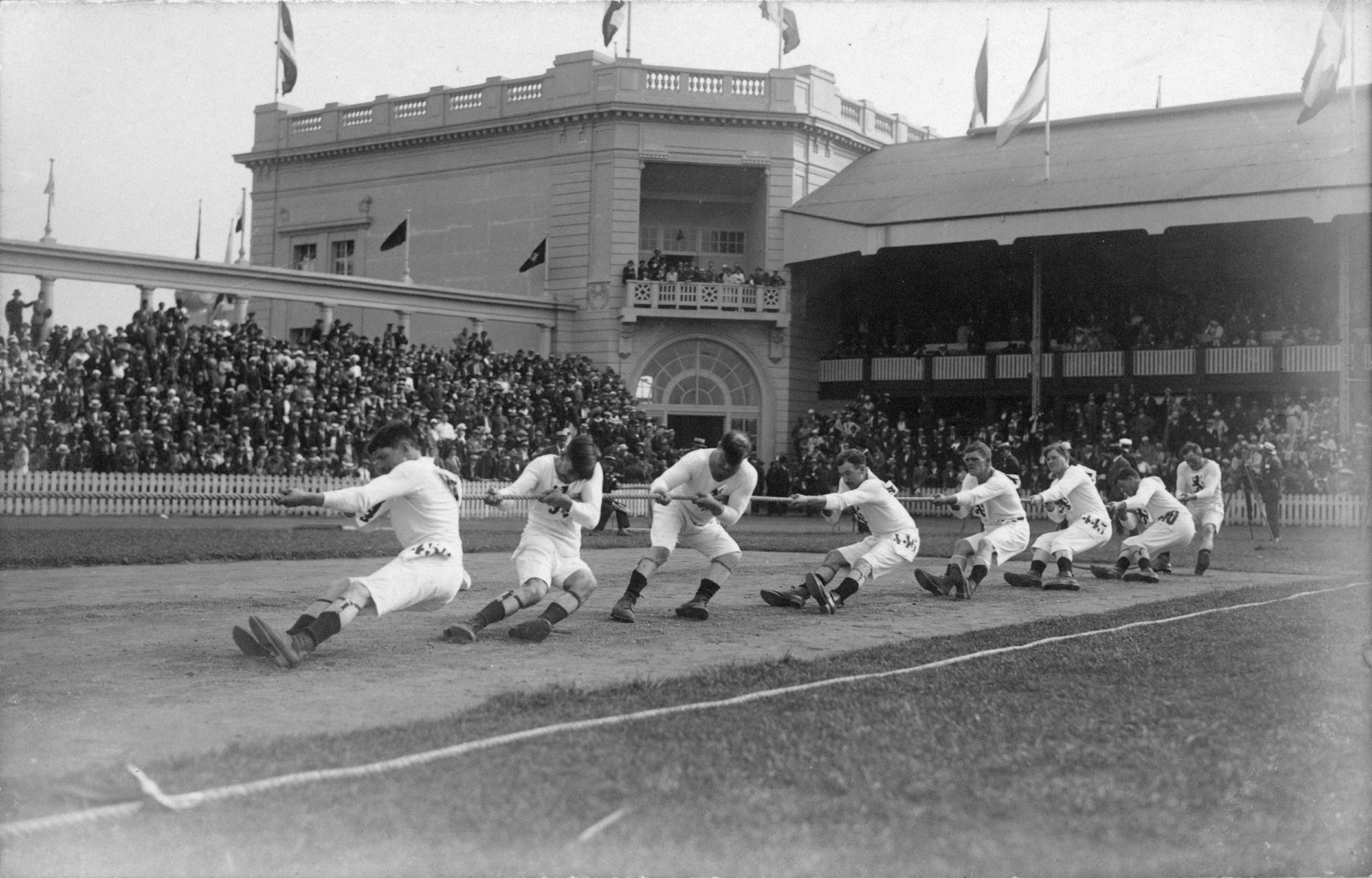 The British team (GBR) in the tug of war, 1st, formed of police officers, during a contest. © IOC

After the 1920 Games, the IOC considered that the number of competitions at the Games was too high, and the tug of war was removed from the Olympic programme, along with 33 other events. Paris 1924 thus saw a reduction from 156 to 126 events.

A numbered platform to present the medals

At the Olympic Games up to 1928, the medal winners were honoured in different ways. At the first Olympic Games in Athens in 1896, George I, the King of Greece, presented them with a medal, an olive branch and a diploma at the Closing Ceremony. Generally, “grouped” medal ceremonies saw the athletes positioned lower than the dignitaries and officials who honoured them.

The first official podiums as we know them today appeared at Los Angeles 1932, and the athletes stood on three steps numbered 1 to 3, with the middle one higher than the other two, and the winner placed in the centre, the runner-up on their right, and the third-placed athlete on their left.

Antwerp 1920, however, saw the appearance of numbered platforms featuring the figures in the current order. The dignitaries who honoured the athletes were still on a platform above. 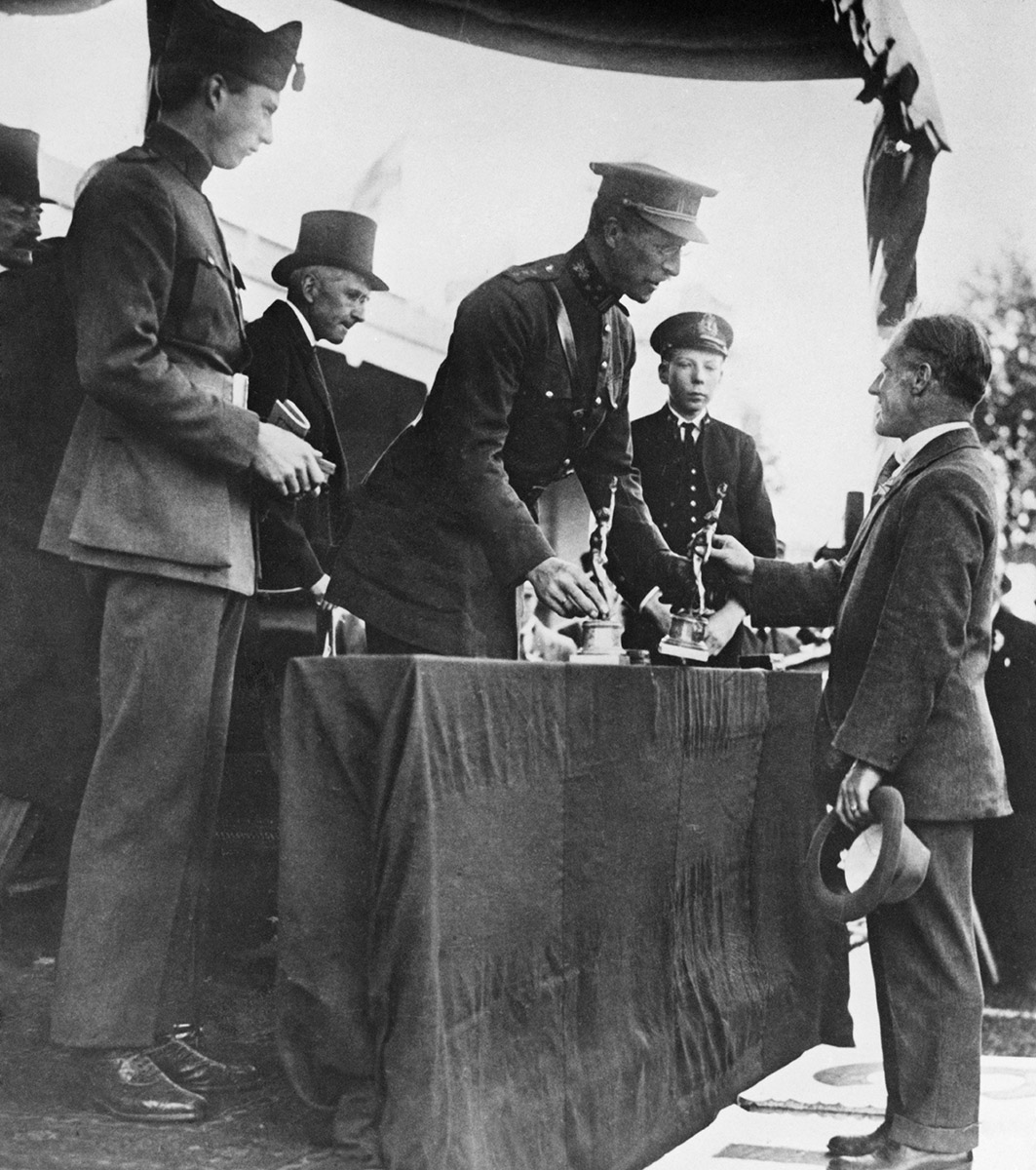 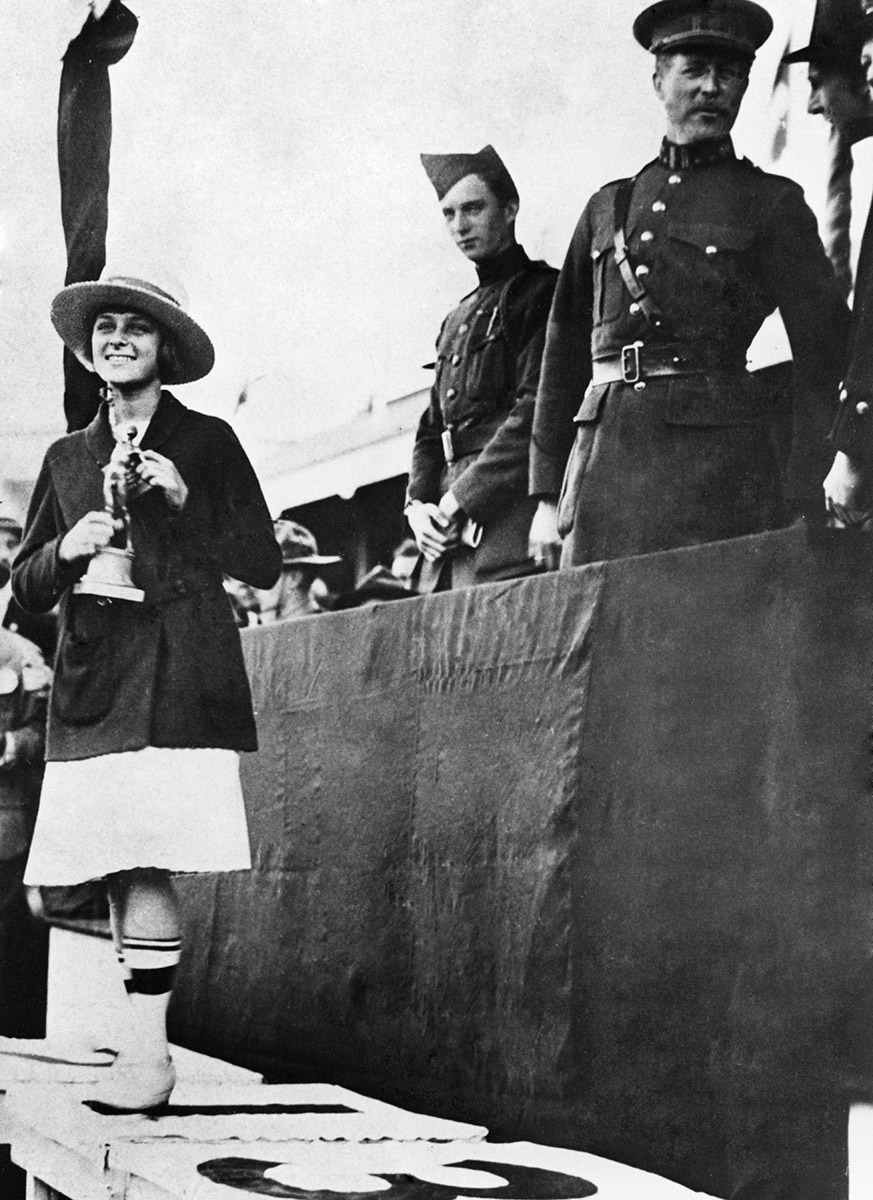 Aileen Riggin (USA), a diving gold medallist, honoured on the top step of the podium with the “Victorious Athlete” statuette. © IOC

At Antwerp 1920, the IOC presented cups and trophies linked to the competitions, which had been offered symbolically since 1906. Later, these were completely done away with and kept at The Olympic Museum in Lausanne. For the Antwerp Organising Committee, however, a medal seemed insufficient. The gold medallists therefore also received a small statuette, created by sculptor Léandre Grandmoulin, entitled “The Victorious Athlete”, representing an athlete holding a laurel crown in his right hand. 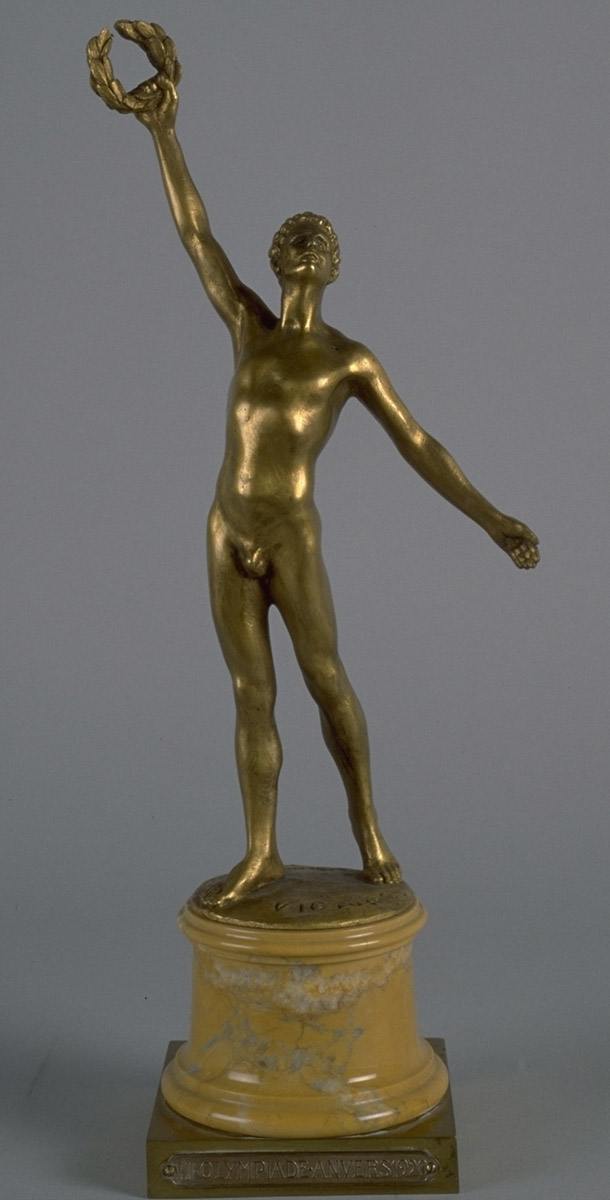 From Antwerp 1920 to Tokyo 2020: never stop believing in your dreams

So the Antwerp Games gave us some wonderful sporting stories. Over 2,600 athletes (including over 60 women) representing 29 countries took part in these Games. Antwerp, which had very little time to clear the city of debris left by the war and build new facilities, stepped up to the challenge of hosting 156 events across the 22 sports on the programme.

The year 1920 also reminds us, in a way, of our current situation. The COVID-19 pandemic has forced the Tokyo 2020 Games to be postponed to 2021. The similarities between these two periods led the Museum team to dig into the archives and highlight the stories of athletes who never stopped believing in the Olympic dream!