The Japan of Tokyo 2020 looks nothing like the country that hosted the first Olympic Games to be held in Asia, 57 years ago. At the time, 19 years after its defeat in the Second World War and the terrible atomic bombing of Hiroshima and Nagasaki, Japan was looking to the 1964 Games to help it rise from its ashes and regain a key place on the international stage. Tokyo, chosen to stage this international event, was to symbolise the country’s renewal. Let’s hear about what the Japanese capital was like in 1964, in the company of Georges Baumgartner. 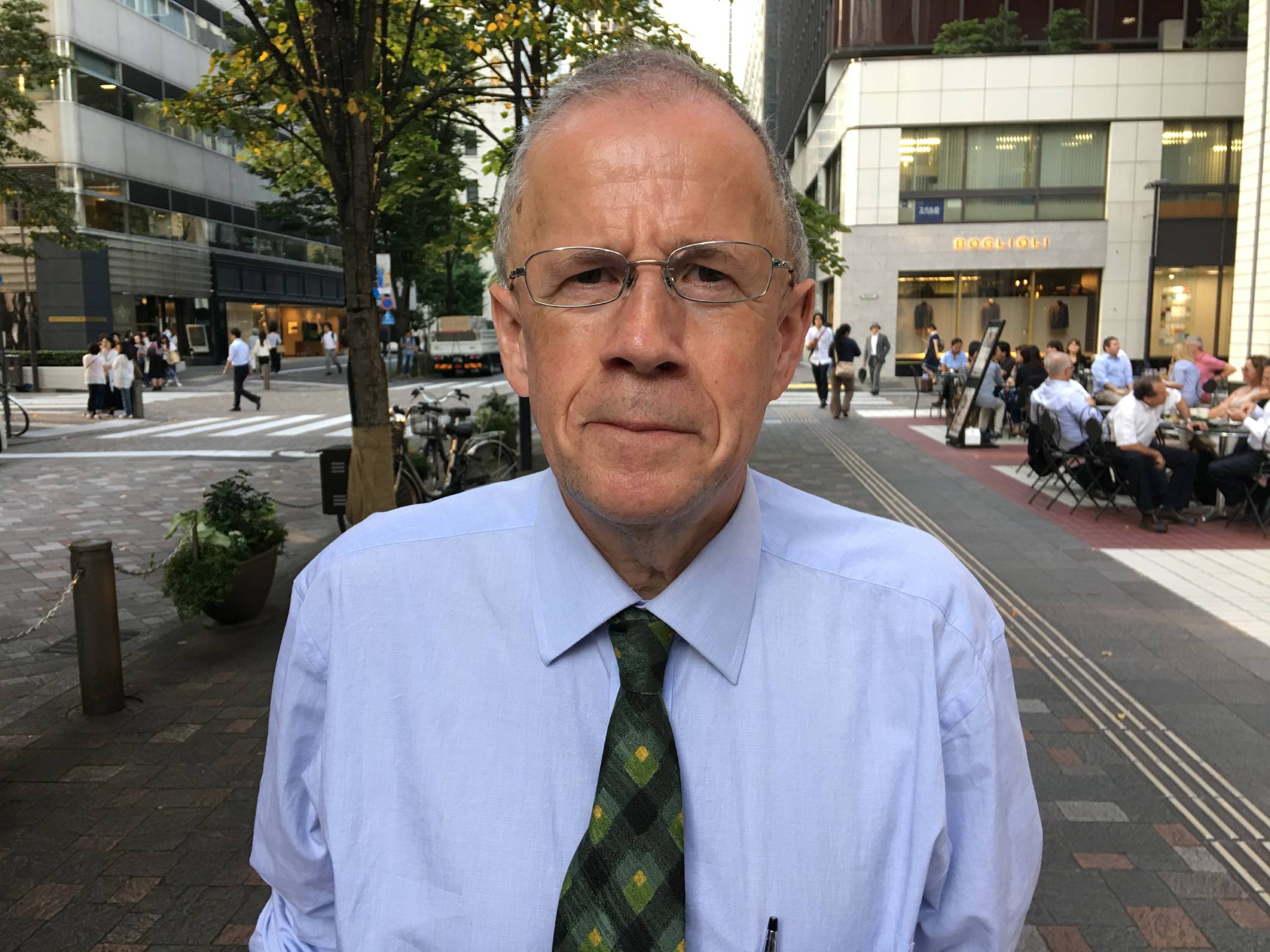 © 2020, G. Baumgartner Having lived in the country since 1982, Georges Baumgartner is an expert in all things Japan. The Swiss journalist, who was the Japan correspondent for Radio Télévision Suisse (RTS) until 2012 and President of the prestigious Foreign Correspondents’ Club of Japan from 2010 to 2013, was especially known for his classic sign-off: “Georges Baumgartner, Radio suisse romande, Tokyo.” Baumgartner, who become a celebrity thanks to his professionalism and his famous catchphrases, still lives in Tokyo, where he keeps a close eye on current affairs in his adoptive country. To mark the 10th anniversary of the 2011 earthquake and nuclear disaster in Fukushima, RTS invited its now retired former correspondent to give his analysis of the consequences these tragic events had on Japanese society.

#4, Georges Baumgartner : Tokyo and the Olympic Games: history and challenges (2/3)

The post-war modernisation of Tokyo

We ended the first episode with Tokyo at the cutting edge of technology and about to take up the huge challenge of staging the Olympic Games during a pandemic; and now Georges Baumgartner reminds us that the city in the 1960s had yet to recover from the Second World War. At the time, Tokyo still carried the scars of the American raids that were even more destructive than the atomic bombs dropped on Hiroshima and Nagasaki.

After the war, Tokyo was moribund and one of the most polluted cities in the world. The sewerage system was antiquated, the city was infested with rats, and there was no drinking water or hot water. Baumgartner claims that Japan spent a total of 1.9 billion dollars on modernisation and reconstruction to host the Games in 1964.

The city plans included the rebuilding of more than 10,000 blocks, offices and homes, around 100 kilometres of urban roads, a monorail between Haneda airport and Tokyo, 40 kilometres of metro lines and a high-speed train between Tokyo and Osaka, the Shinkansen. The Japanese government produced a massive growth development plan aimed at doubling GDP and per capita income during the 1960s thanks to the export of transistors, televisions and cars to North America and Europe.

The inhabitants of Tokyo had to live through all this building work before the Games, putting up with the smell of concrete, smog, industrial pollution and constant noise.

For Georges Baumgartner, one of the biggest parts of the modernisation was the creation of new sewers. At the time, less than a quarter of the city’s districts had a sewerage system.

Basketball players and swimmers competed for their medals in the National Stadium with its suspended roof, designed by architect Kenzo Tange. This Olympic complex was also known as the Yoyogi National Gymnasium, as it is located next to Yoyogi Park. 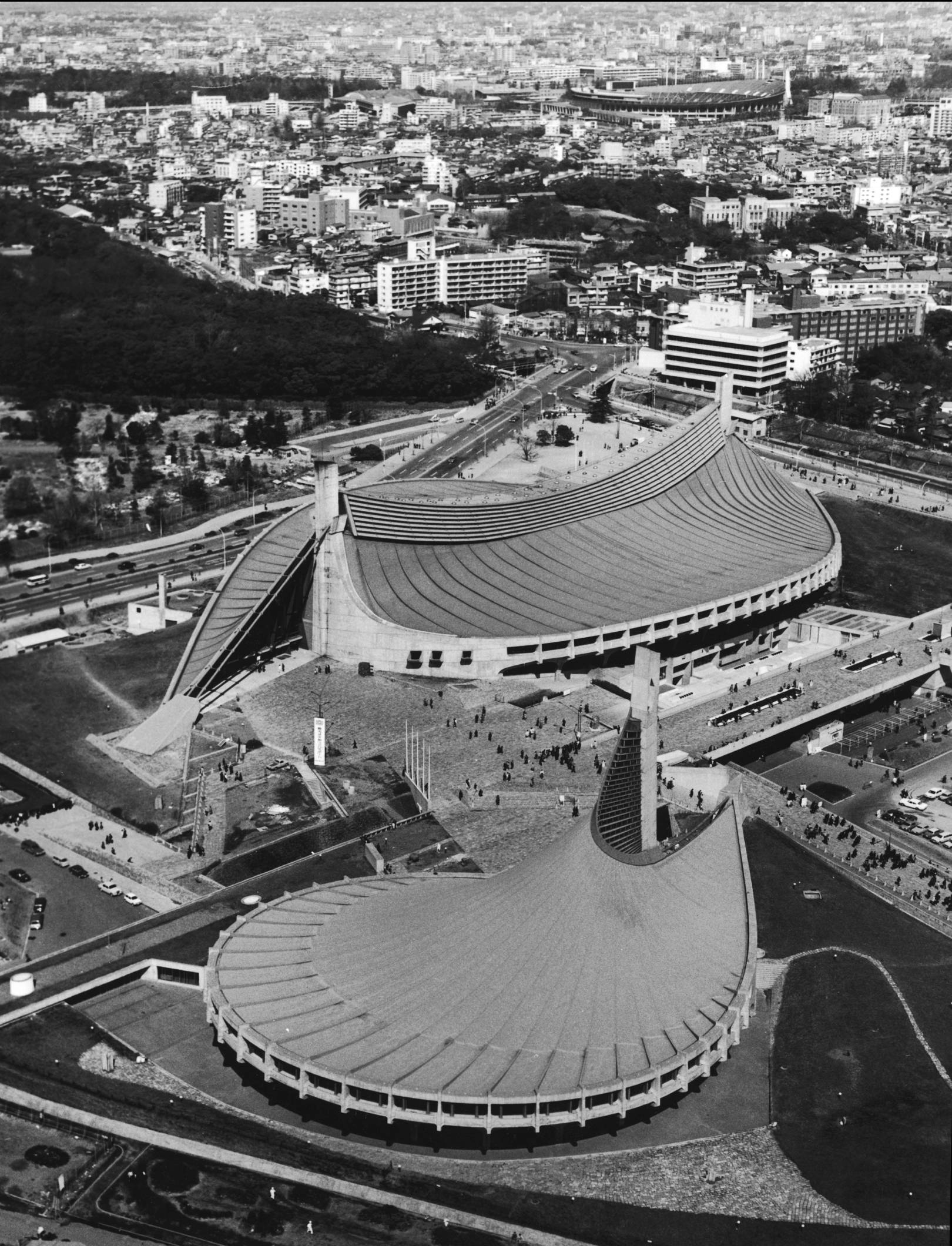 The Yoyogi National Gymnasium designed by Kenzo Tange. With its two dramatic sweeping roof sections supported by pre-stressed cables, the building gives the impression of a giant bird spreading its wings ready to take off. © 2006 Getty Images

In 1958, work started on the National Stadium in Tokyo, which would be the main stadium for the 1964 Games. The official capacity was 50,339. 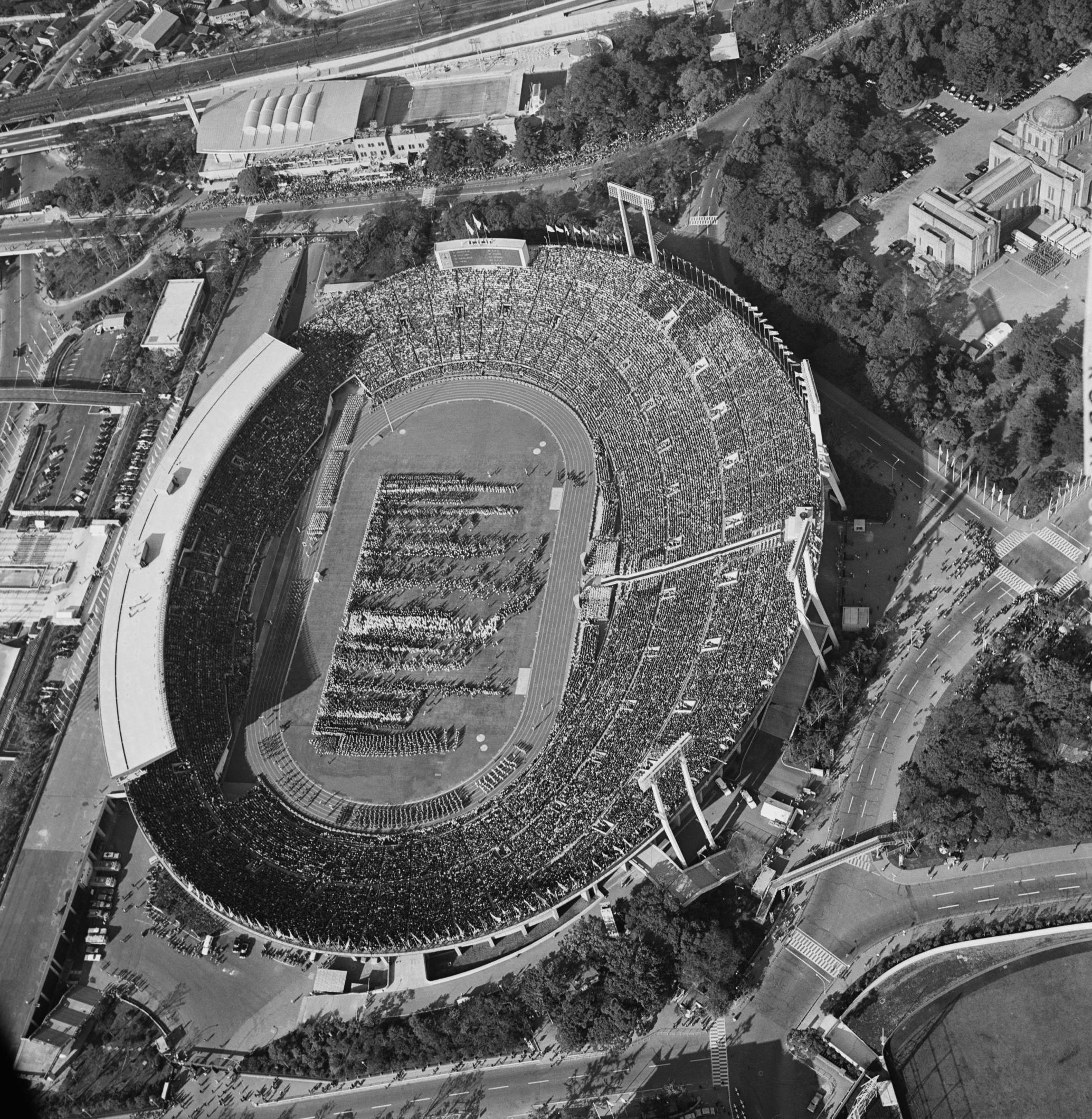 The National Stadium in Kasumigaoka, opened by Emperor Hirohito on 10 October 1964 © 2019 Getty Images

The Nippon Budokan was built to host the first Olympic judo competitions at the Games in 1964. In 2021, it will be used to stage the judo and karate competitions, 57 years later. 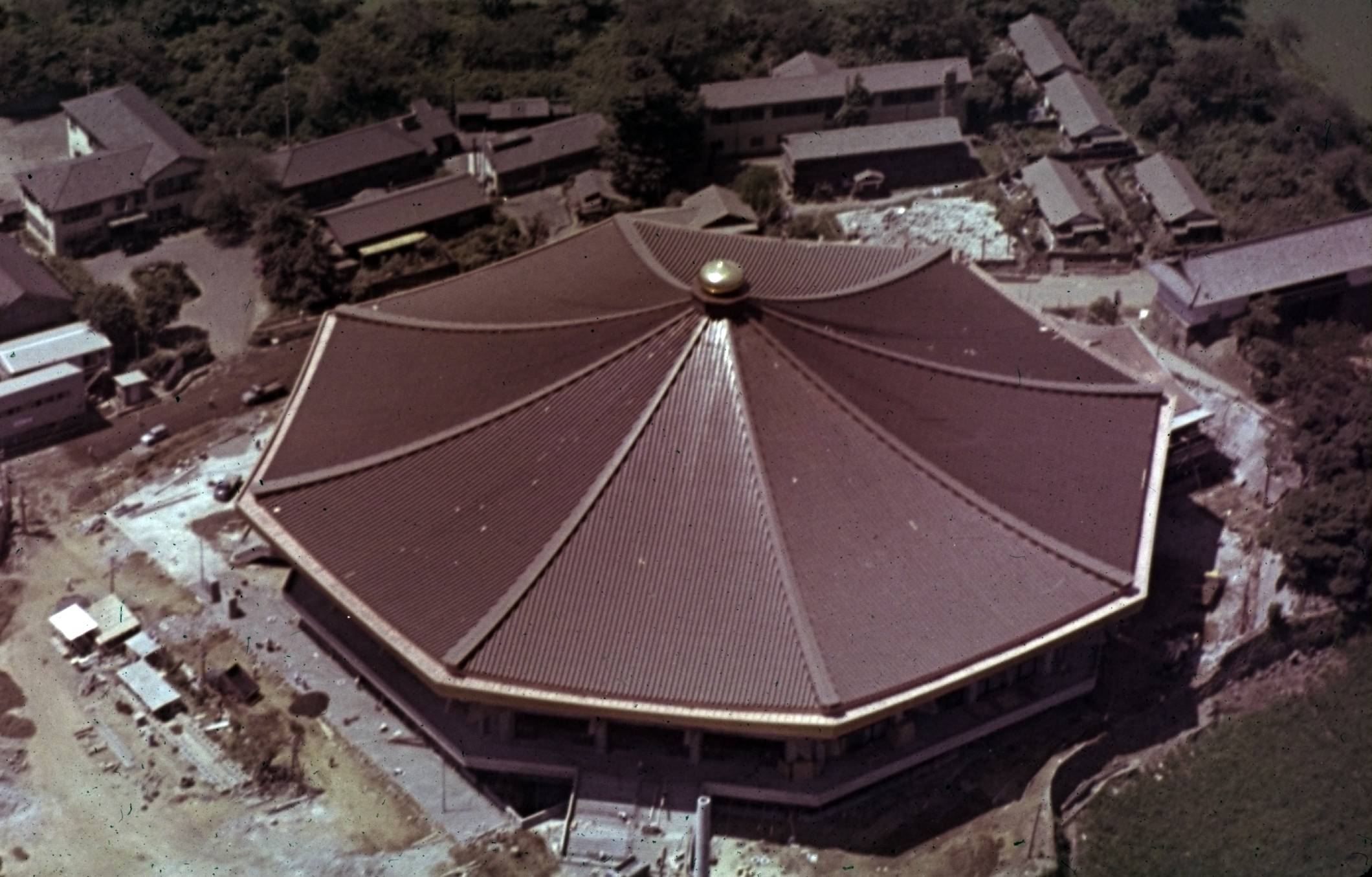 Aerial view of the Nippon Budokan Hall, built between the Imperial Palace and Yasukuni temple in Kitanomaru Park. © 1964 IOC

The 7,000 athletes stayed at the Olympic Village in Yoyogi Park in the city centre, next to the Meiji Shrine. This site was of particular significance, Georges Baumgartner explains, as the Games provided the Japanese government with the opportunity to move the American base that had used this land for military parades and to house the soldiers’ families. 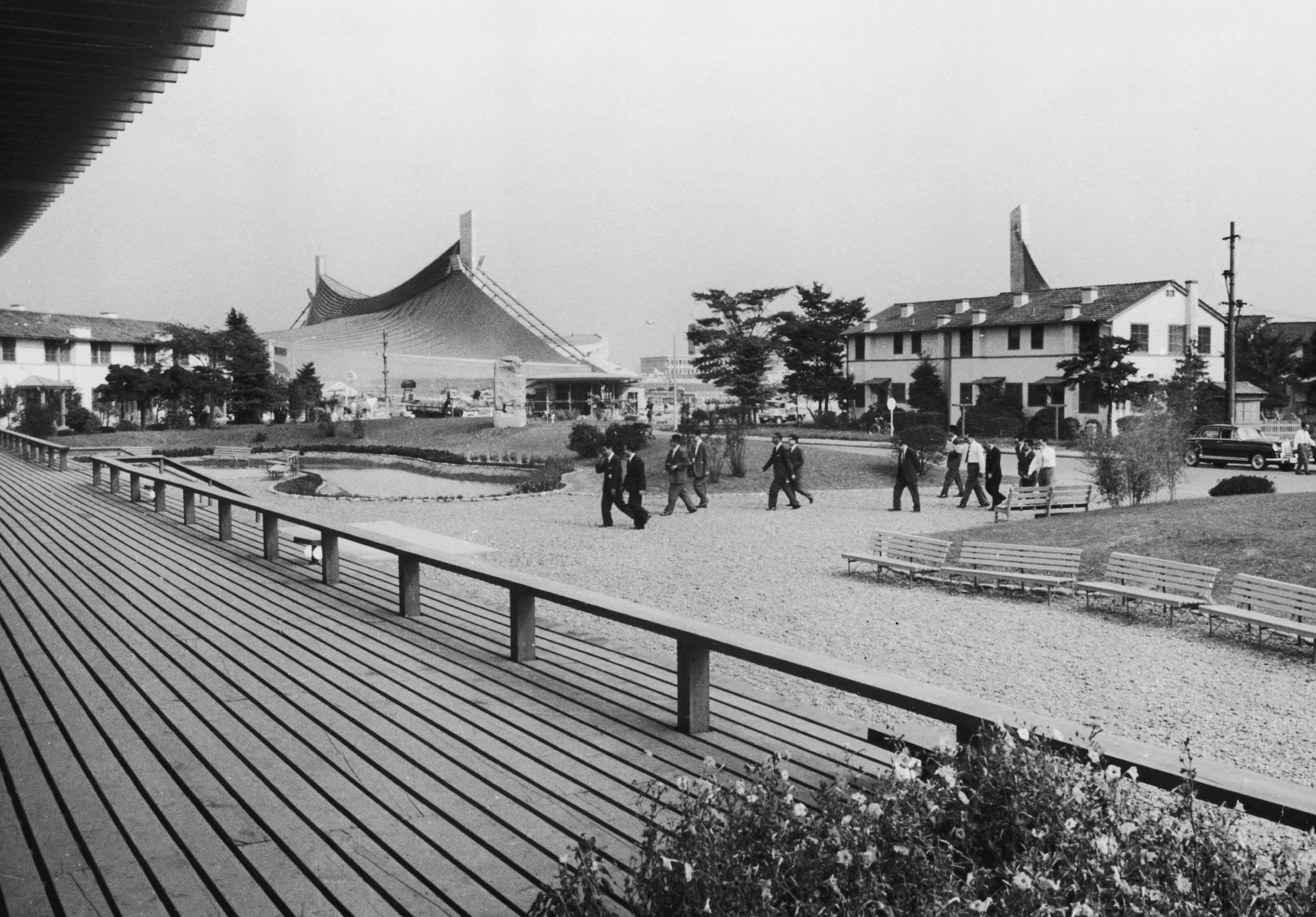 The Tokyo 1964 Olympic Village in the Yoyogi district, with 510 houses or bungalows and 15 apartment blocks that were ultra-modern for their time. © 2004 Getty Images

Georges Baumgartner describes the period leading up to the Games, which many Japanese remember very well! Posters appeared in underground stations reminding people to stop urinating in public and not to go outside wearing pyjamas. Three key words were used to improve public morality: cleanliness, order and kindness. It was also prohibited to walk and smoke at the same time, to spit in the street and to be drunk in public.

To be able to welcome foreign visitors, the Japanese started learning English. The demand for lessons was so great that American children based in Japan were drafted in to help.

For the Games, Japan was expecting more than 30,000 foreign spectators, but had a lack of hotel rooms. To make things even more complicated, the government decided that no foreign national could buy tickets without proof of residence. On top of that, foreigners had to pay 50 per cent of the cost of rooms reserved in advance. But many were reluctant to do so without any guarantee of getting tickets.

The Games opened on 10 October 1964. Yoshinori Sakai, who was born on the day the atom bomb was dropped on Hiroshima, ran with the torch and lit the Olympic cauldron. Georges Baumgartner talks about the role played by Emperor Hirohito at the Opening Ceremony and throughout the Games. He was the only person to remain standing through the parade of the delegations, not so much in his role as head of state as that of patron. After the war, the Emperor lost his status as a living god, and his role became simply to continue the history of Japan.

The televised coverage of the Ceremony was watched by over 65 per cent of the Japanese population. These were the first Games to be broadcast live and in colour by satellite. Seiko developed a unique automatic electronic timekeeping system. The Olympic Games Tokyo 1964 gave the Japanese a feeling of regained confidence. For its part, Tokyo was transformed into a shining megalopolis.

Japan first took part in the Olympic Games in 1912 in Stockholm, and won its first medals at the 1920 Games in Antwerp, in the men’s tennis competition. In Berlin in 1936, Japanese athletes won six gold medals, including in the marathon.

Georges Baumgartner explains that Leni Riefenstahl’s film Olympia, produced during the Games in 1936, proved extraordinarily popular in the Land of the Rising Sun. The Japanese, who had been fascinated by Ancient Greek culture since the 19th century, appeared in the film as descendants of the Ancient Greek athletes, in the same way as the western athletes. According to Georges Baumgartner, this was a way for the Japanese to shake off their past under Chinese domination and to become westernised through Olympism.

The war meant that the 1940 Games scheduled to be held in Tokyo were cancelled. Because of its role in the war, Japan was then prohibited from taking part in the 1948 Games in London. Tokyo 1964 finally allowed Japan to turn the page on its imperialist past.

In episode #5, Georges Baumgartner will talk to us about sport in Japanese society, from martial arts to the present day, explaining how important sport is for conveying values and serving as a model for the Japanese.