With one year to go before the opening of the Tokyo 2020 Games, it is important to stand together in unity and solidarity to cope with this unprecedented period. One hundred years ago, the celebration of the Olympic Games in Antwerp offered a message of hope, unity and peace after a very dark period. Check out our blog article on the 1920 Games in Antwerp which draws parallels with the situation today

On 23 July 2020, the one-year countdown to the postponed Olympic Games Tokyo 2020 gets under way. For the Olympic Movement, the journey is continuing. These last 12 months before the Games are a recognition of the emblematic moment when the world will come together to celebrate as one. By marking this anniversary with the launch of its #StrongerTogether campaign, the IOC is showing its support and solidarity towards the Tokyo 2020 organisers, the athletes who are continuing their training and maintaining their positive approach, and the fans who look forward to following the Olympic Games and experiencing the emotions of sport live.

From a logistical and organisational angle, postponing the Tokyo Games from 2020 to 2021 has thrown up some huge challenges. The aim now is to simplify and reduce the cost of the Games so that they can be organised efficiently, safely and sustainably in this new context.

In the past, when the Olympic Games were awarded on 5 April 1919 to Antwerp as a tribute to the heavy price paid by the Belgians during the conflict, organising these Games became a similar tour de force for the city, which had to get ready to host athletes and spectators from all over the world in a very short space of time. More than 2,600 athletes from 29 countries were expected!

The IOC’s Olympic archives remind us of these inspiring moments from the past. Get ready for a fascinating journey through our archives from 1920.

The first stone of the Olympic Stadium in Beerschot was laid on 4 July 1919 by the Mayor of Antwerp, Mr Jan De Vos. The Stadium was opened less than a year later, on 23 May 1920 with a gymnastics demonstration. 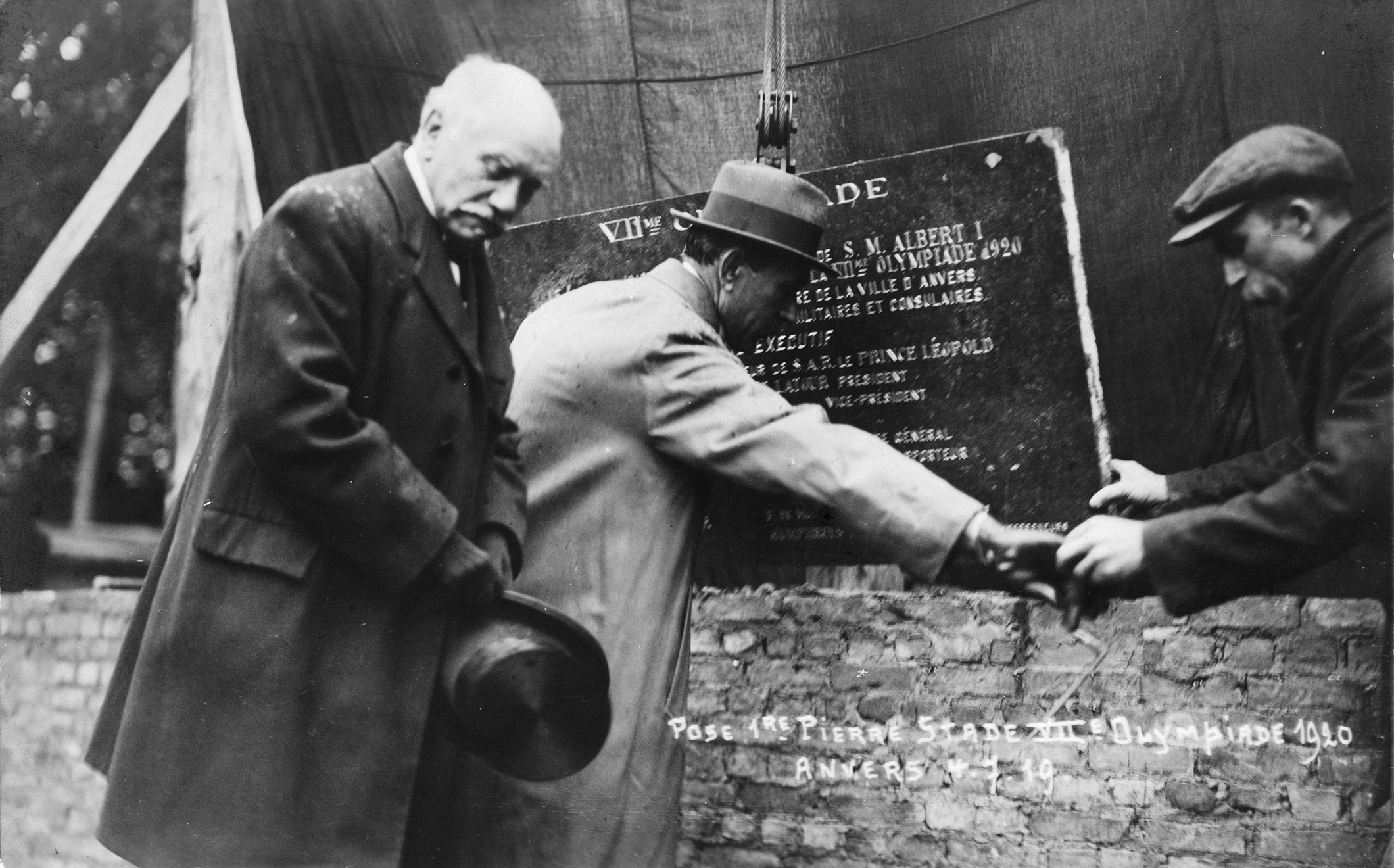 Laying and inscribing of the first stone of the Antwerp Olympic Stadium in July 1919. © IOC 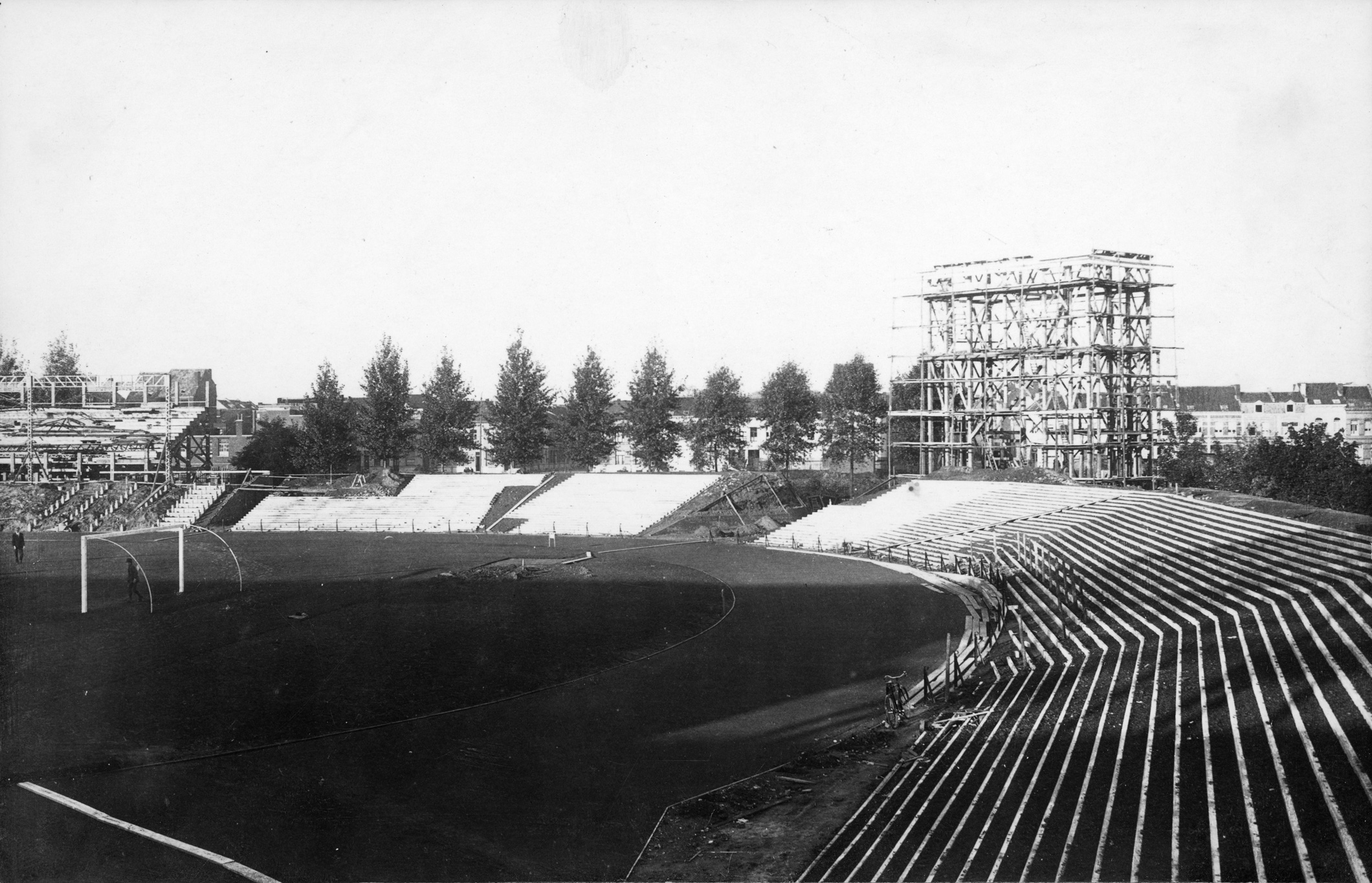 The Olympic Stadium under construction. © IOC 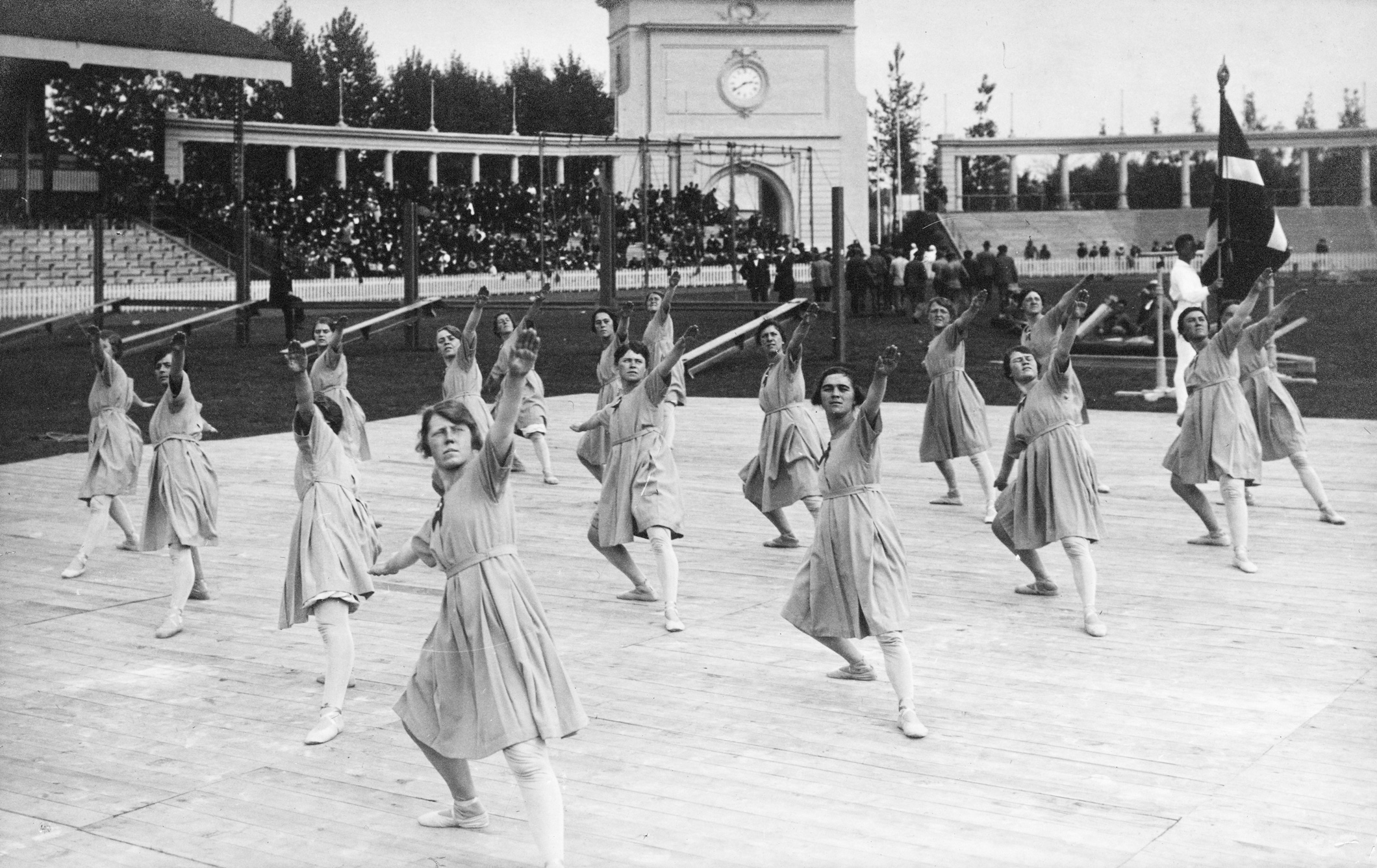 Gymnastics demonstration for the opening of the Olympic Stadium in May 1920. © IOC

One year after the 1920 Games were awarded to the city of Antwerp, the aquatics stadium was also ready to host the competitions in these sports. For the first time, a structure exclusively for the swimming, diving and water polo competitions was built for the Olympic Games. A rudimentary pool 100 metres in length was created in a canal that had formerly been part of the city’s fortifications. The post-war conditions, lack of time and limited budget forced the organisers to build a temporary structure. 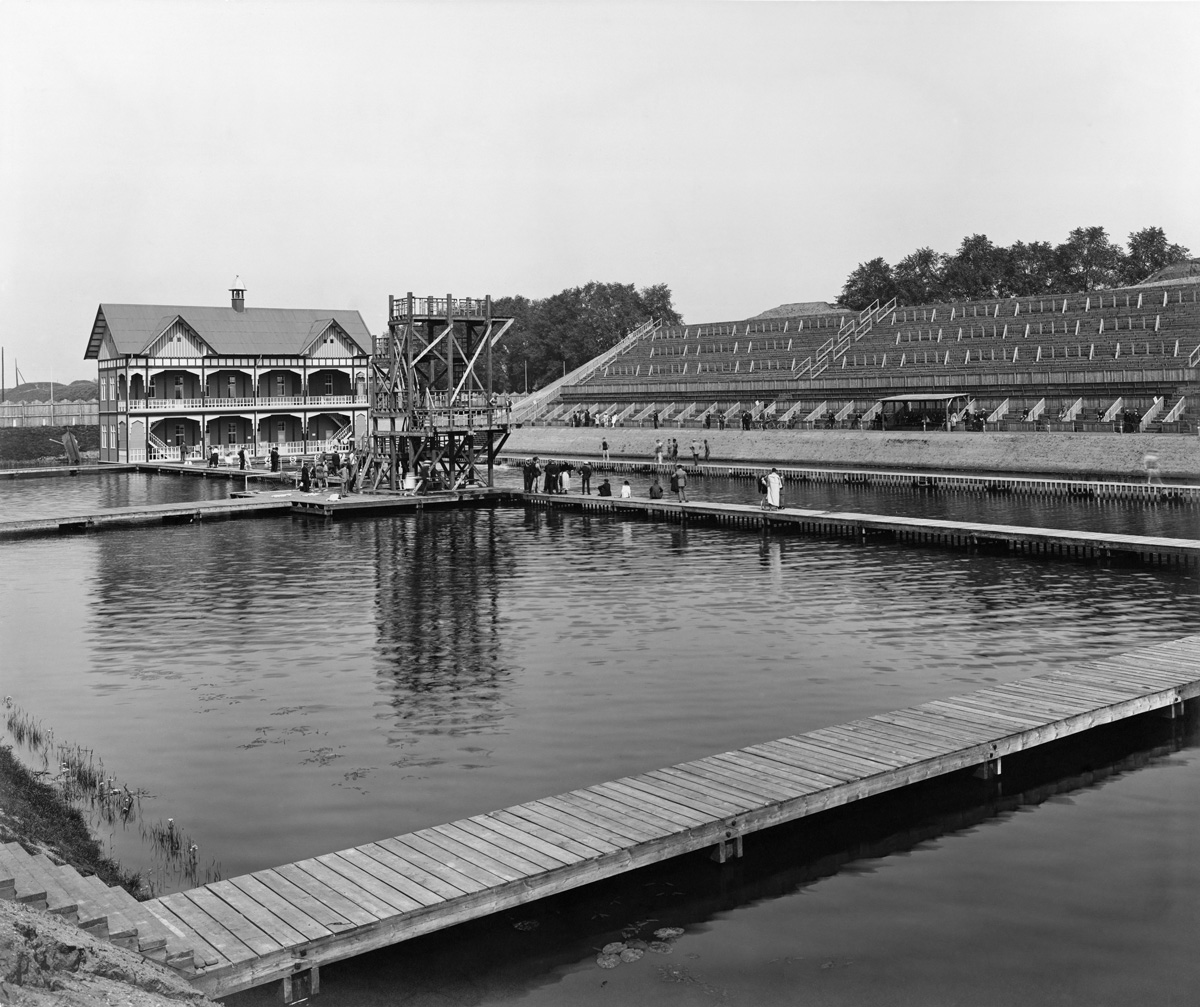 The aquatics stadium with its three pools and diving platform, and the old city ramparts used as the spectator stands. © IOC

The athletes tell their story 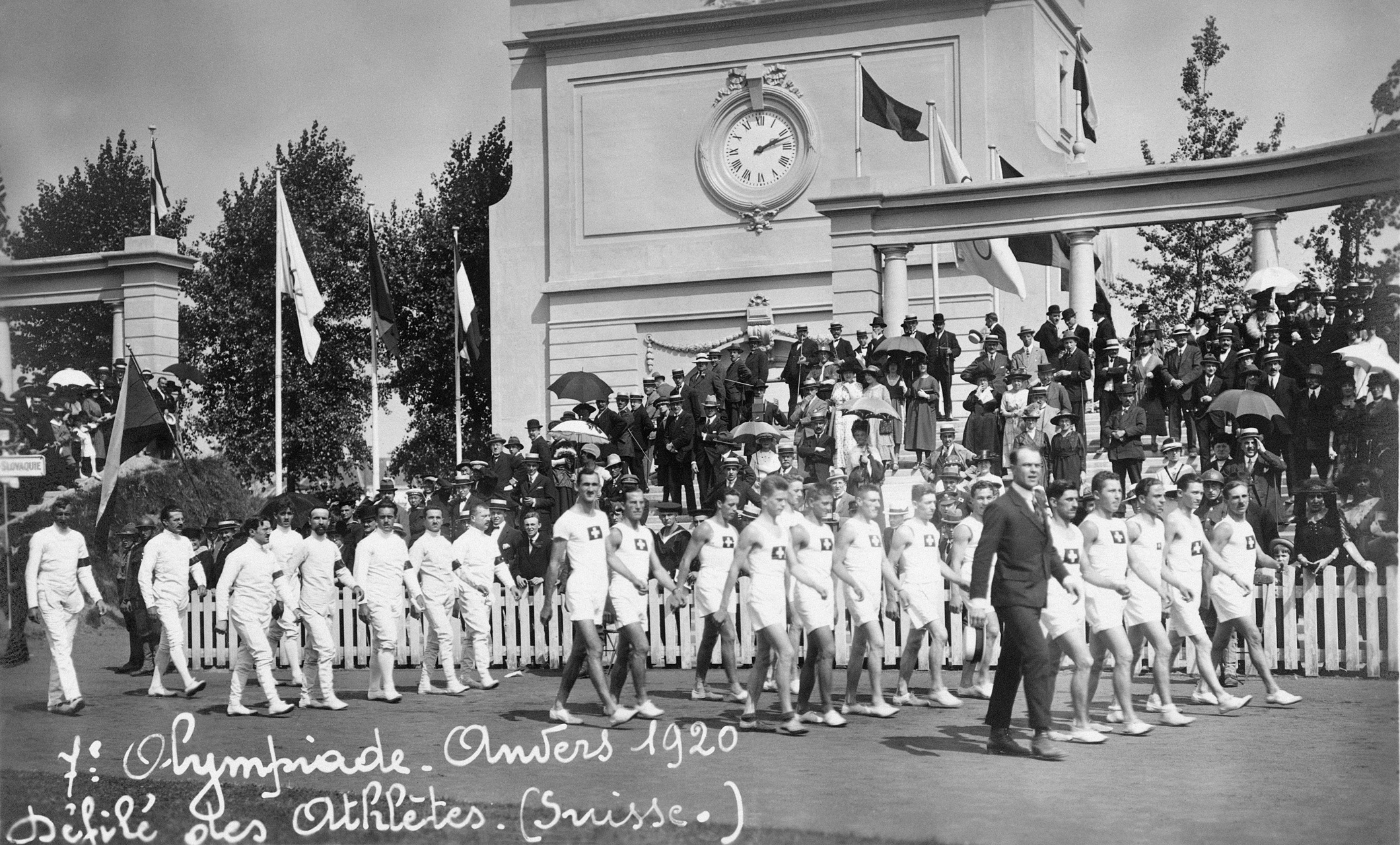 The Swiss team at the Antwerp 1920 Opening Ceremony. © IOC

Sketch of the aquatics stadium in the diary kept by Armand Boppart (SUI), a Swiss water polo player at the Olympic Games Antwerp 1920. IOC Archives. © IOC 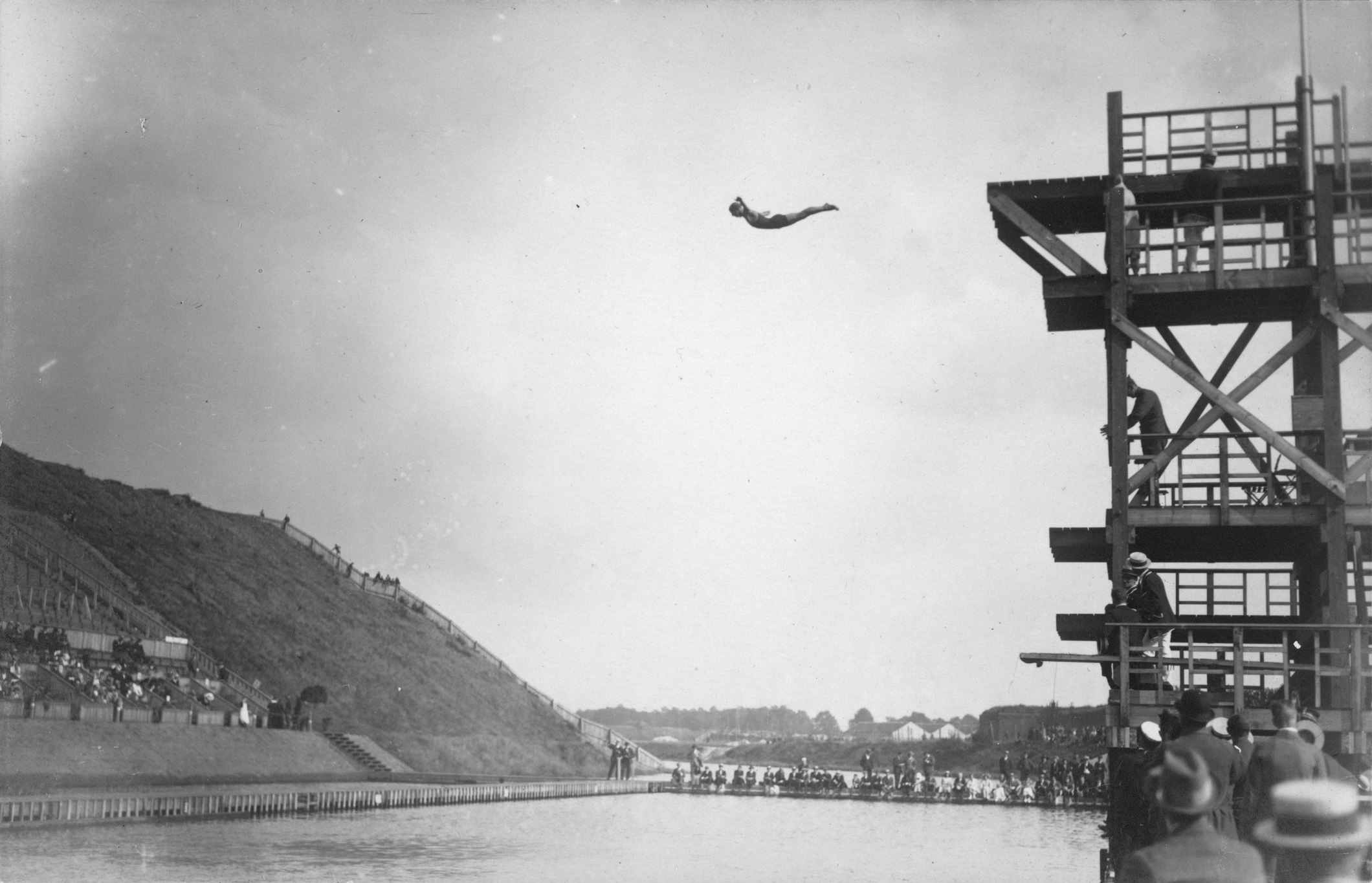 The weather was poor and the water in the canal extremely cold, but the athletes kept their motivation. Some of the athletes took hot showers to warm up, while others had dressing gowns ready to put on when they came out of the water. 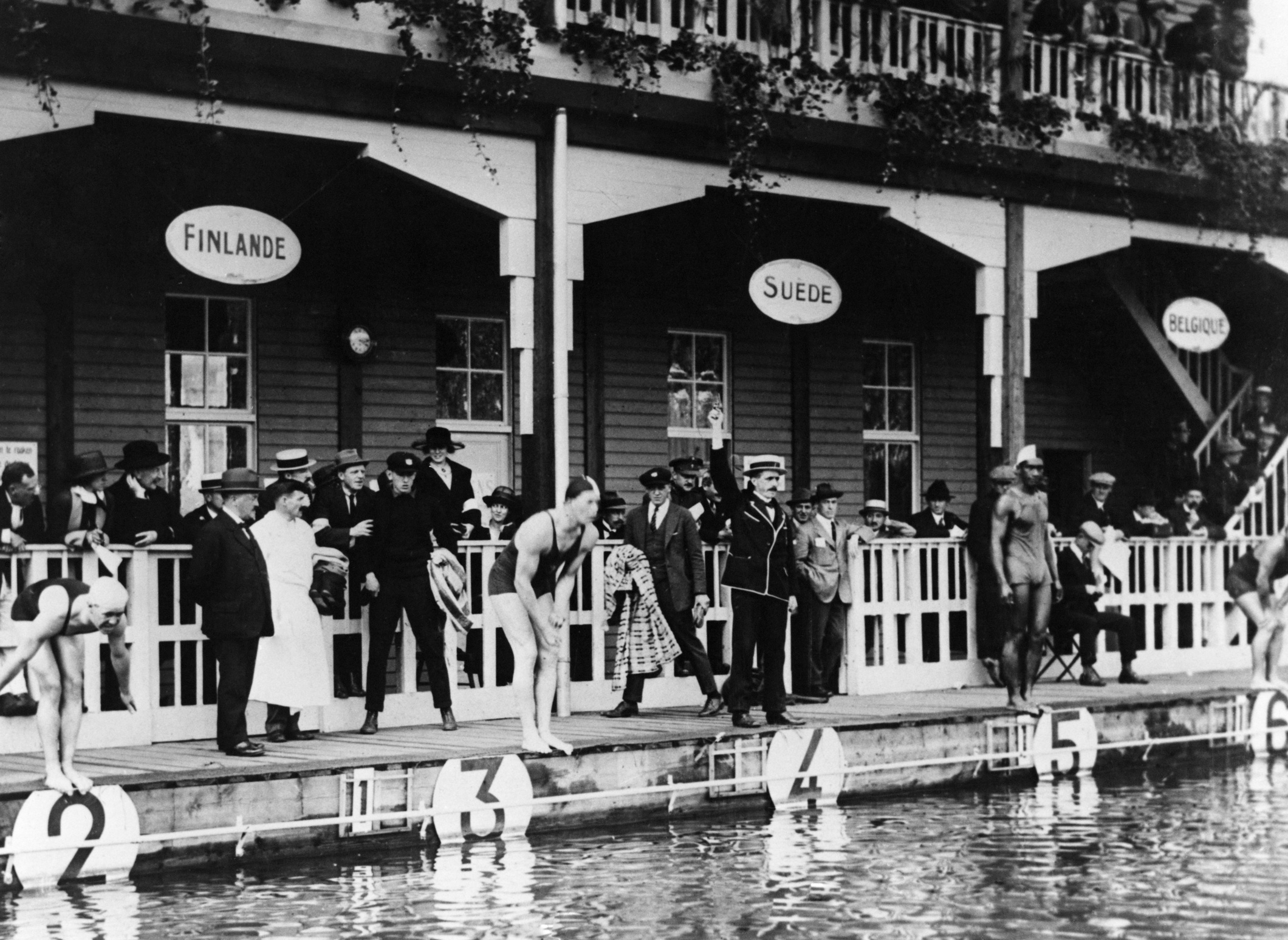 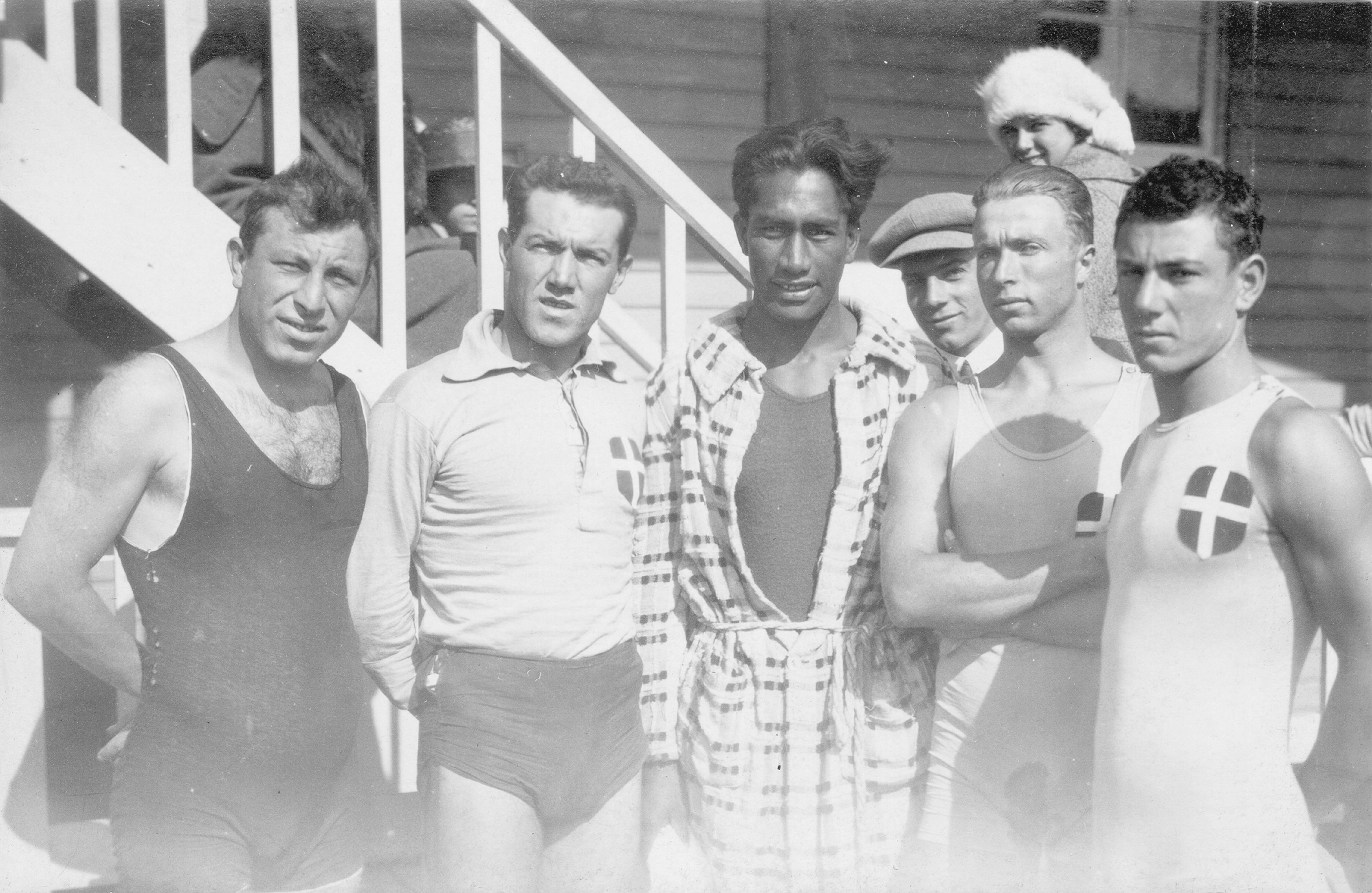 Duke Paoa Kahanamoku (USA), in his dressing gown, with the Italian swimmers. © IOC

In January 1920, invitations to take part in the Olympic Games in Antwerp were sent to more than 30 National Olympic Committees. To facilitate transport arrangements and make things easier for the visitors, no customs duties were payable for horses, sports equipment and luggage, and reduced-price tickets were offered for Belgian trains. Interpreter-guides met the sports teams at Antwerp railway station. 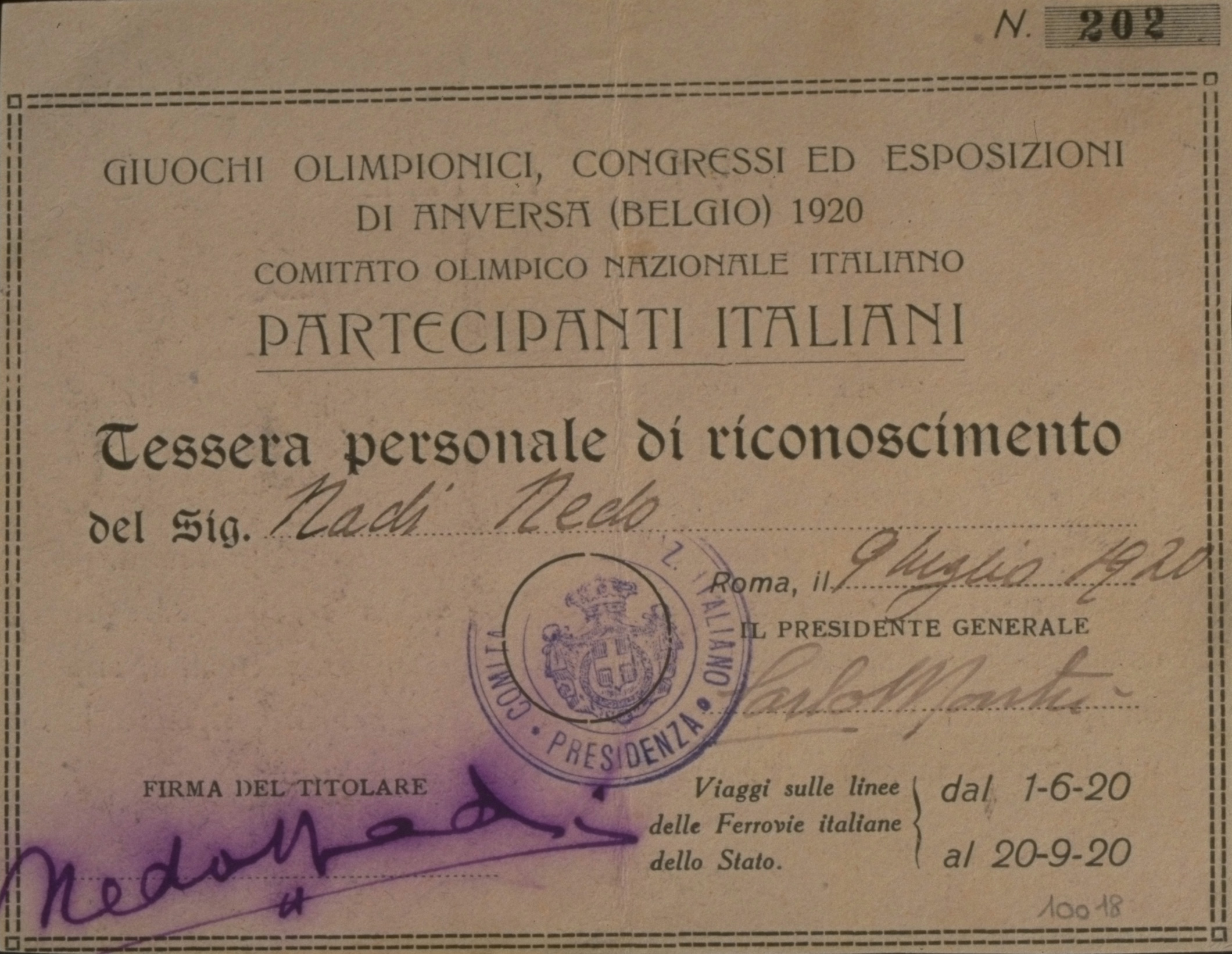 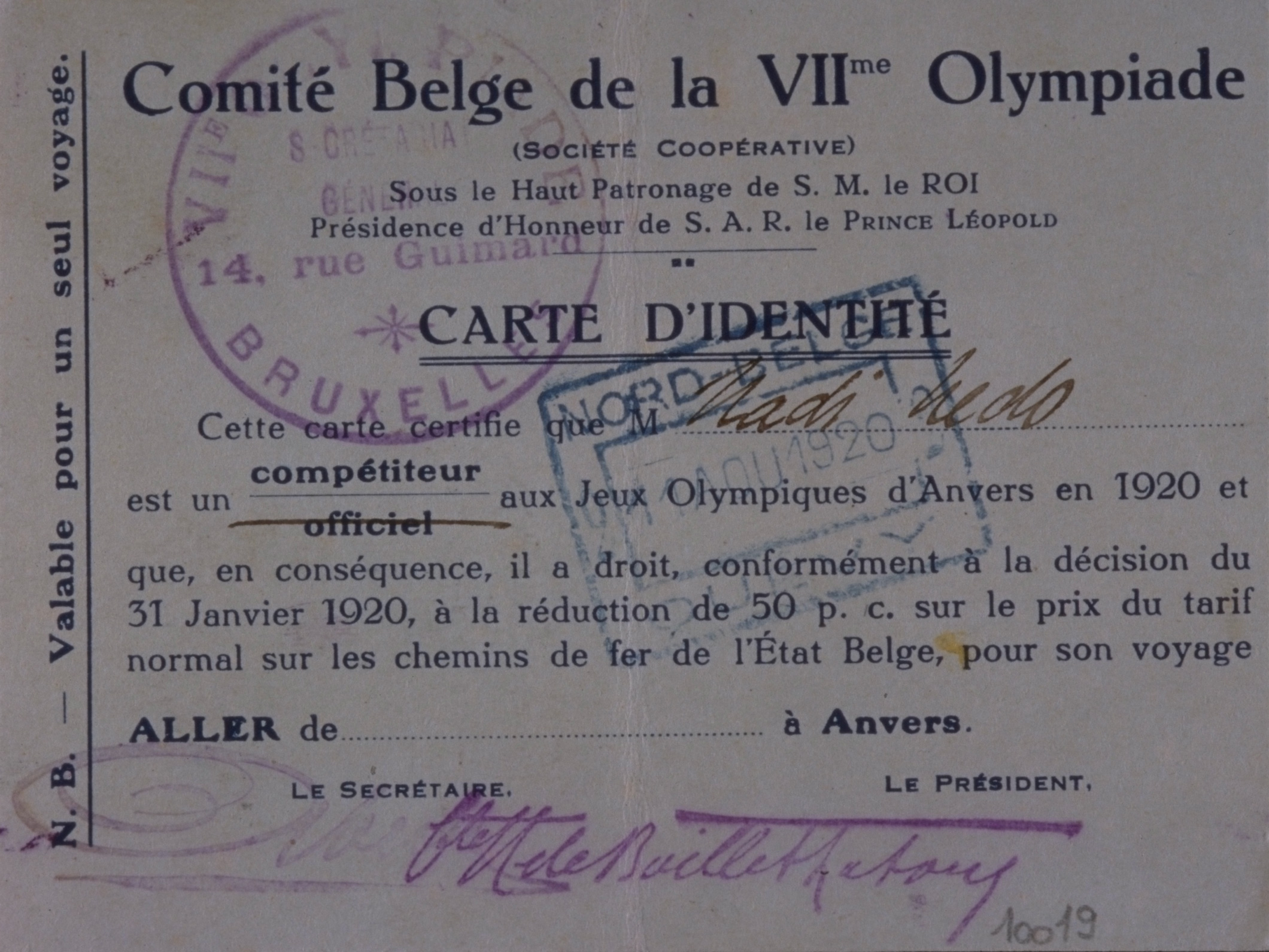 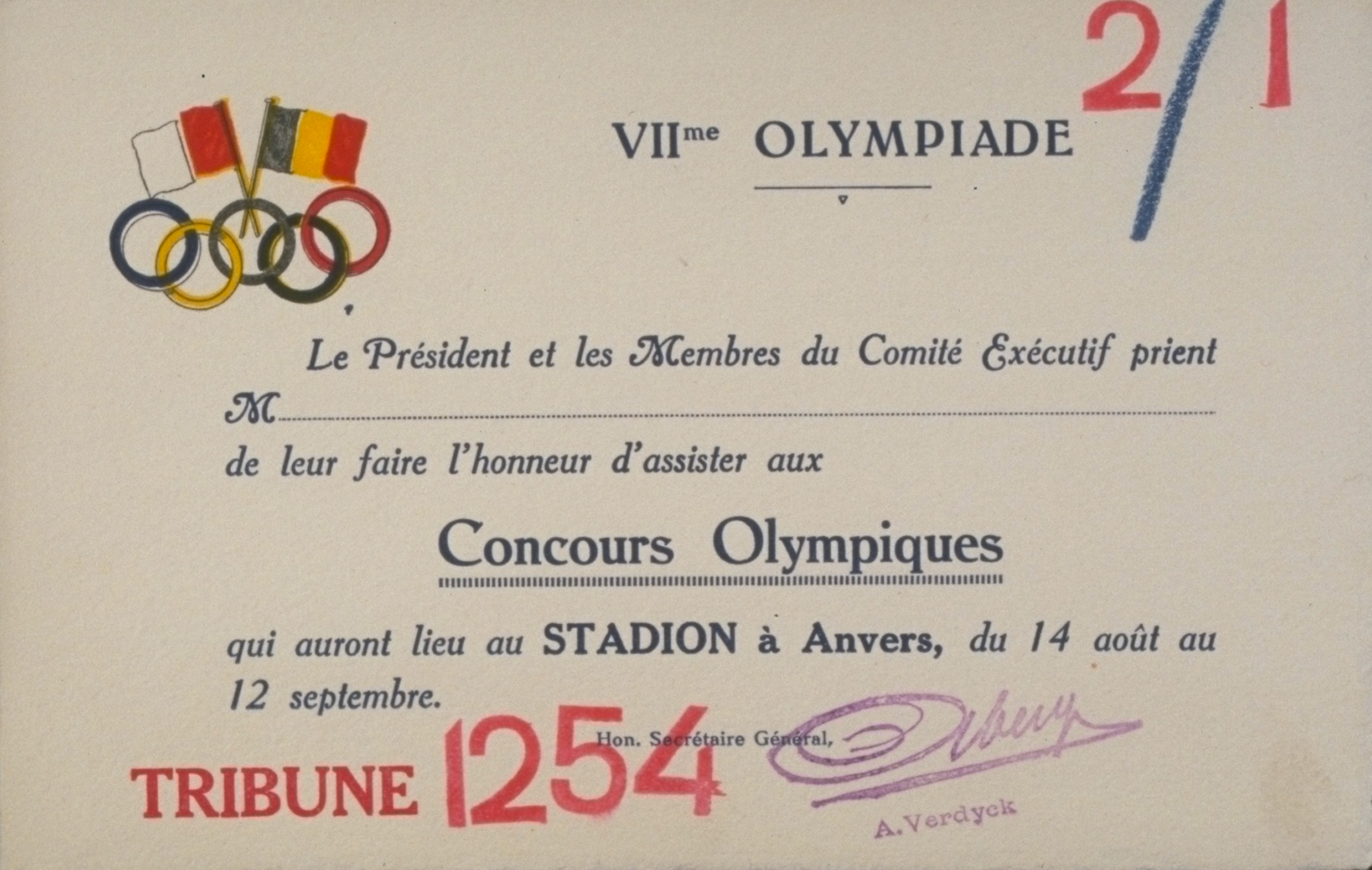 Blank invitation to the Olympic competitions at Antwerp Stadium between 14 August and 12 September. IOC Archives. © IOC

To make things easier for the spectators, a detailed prospectus containing a map of the city, a ticket price list and a stadium plan was available all over the city. 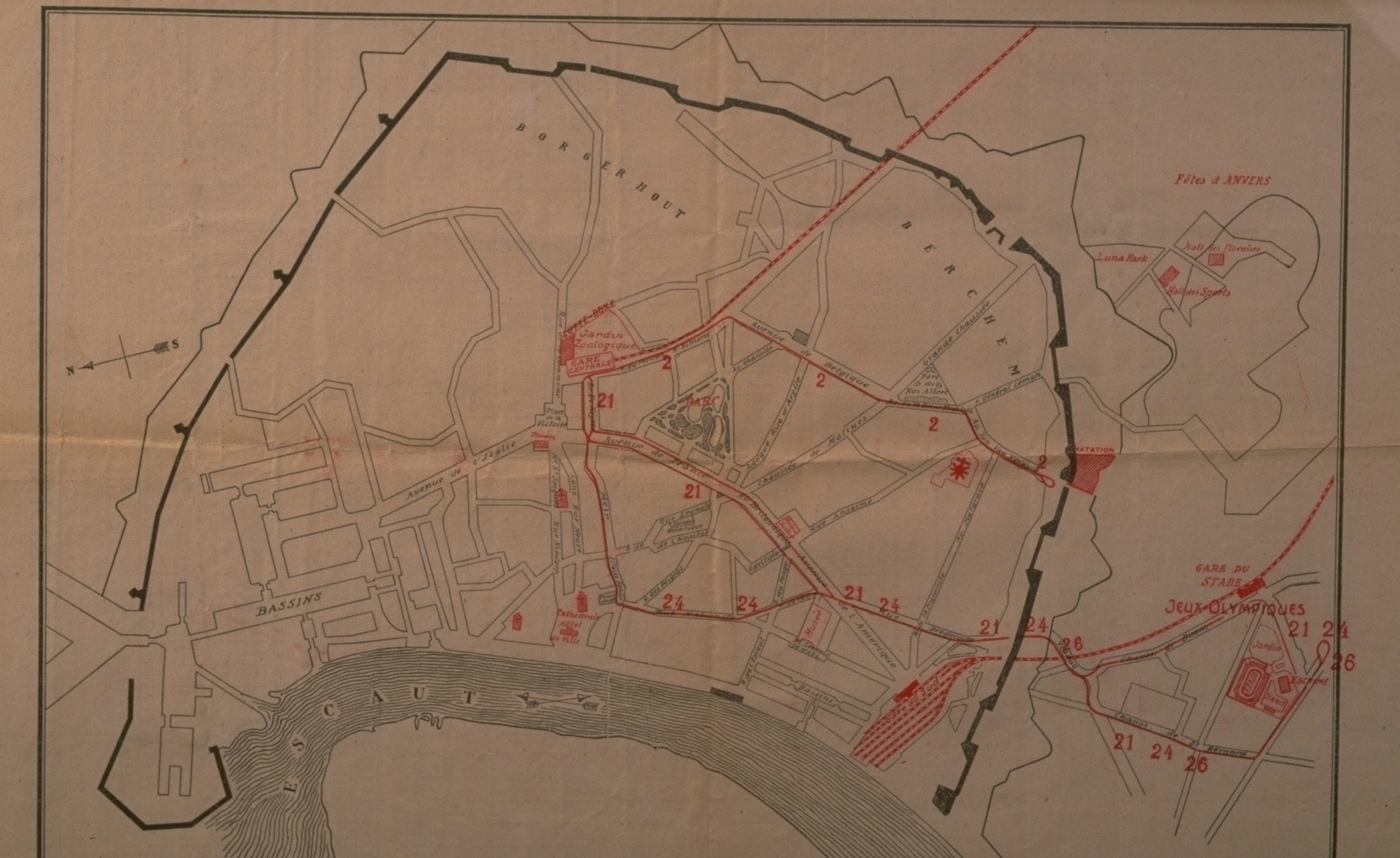 Leaflet showing a map of the city and a plan of the Olympic Stadium, and the subscription terms, ticket prices and general programme. IOC Archives. © IOC

Antwerp pulled off the feat of organising the Games of the VII Olympiad thanks to the incredible hard work of the city and country. For their part, the athletes continued to train and excel in this very difficult post-war context, and to pursue their Olympic dream.

Recalling the past by celebrating the centenary of the 1920 Games in Antwerp 1920 is also a way of looking back at the inspiring moments of the past, and the emotion and excellence of the Olympic Games. Today, with one year to go before the Olympic Games Tokyo 2020, we are living in an important time, with a new journey to embark upon before we can all come together and celebrate!