This year, the Olympic Games Antwerp 1920 (BEL) are 100 years old.
Looking back at them is a chance to draw parallels between that post-war edition and the strange pandemic period we are experiencing today.

A century ago, the Games in Antwerp were the first to be organised after World War I, the cancellation of the 1916 Games due to be held in Berlin, and the Spanish flu pandemic.
These Games in Antwerp also saw the first appearance of the rituals that would go on to express the Olympic values: strong messages of hope in a fragile world. Today, the COVID-19 pandemic has forced the Tokyo 2020 Games to be postponed and called into question much of our modern way of life.

The similarities between these two periods thus led The Olympic Museum team to delve into their archives!

THE GAMES IN ANTWERP 100 YEARS AGO

In this photo, the Olympic flag, seen in a stadium for the first time, flies above the heads of the delegation members. The Japanese flag can be seen in the foreground.

This photo instantly draws a historic parallel between these first post-war Games and the current context, which has forced a postponement of the Tokyo 2020 Games. 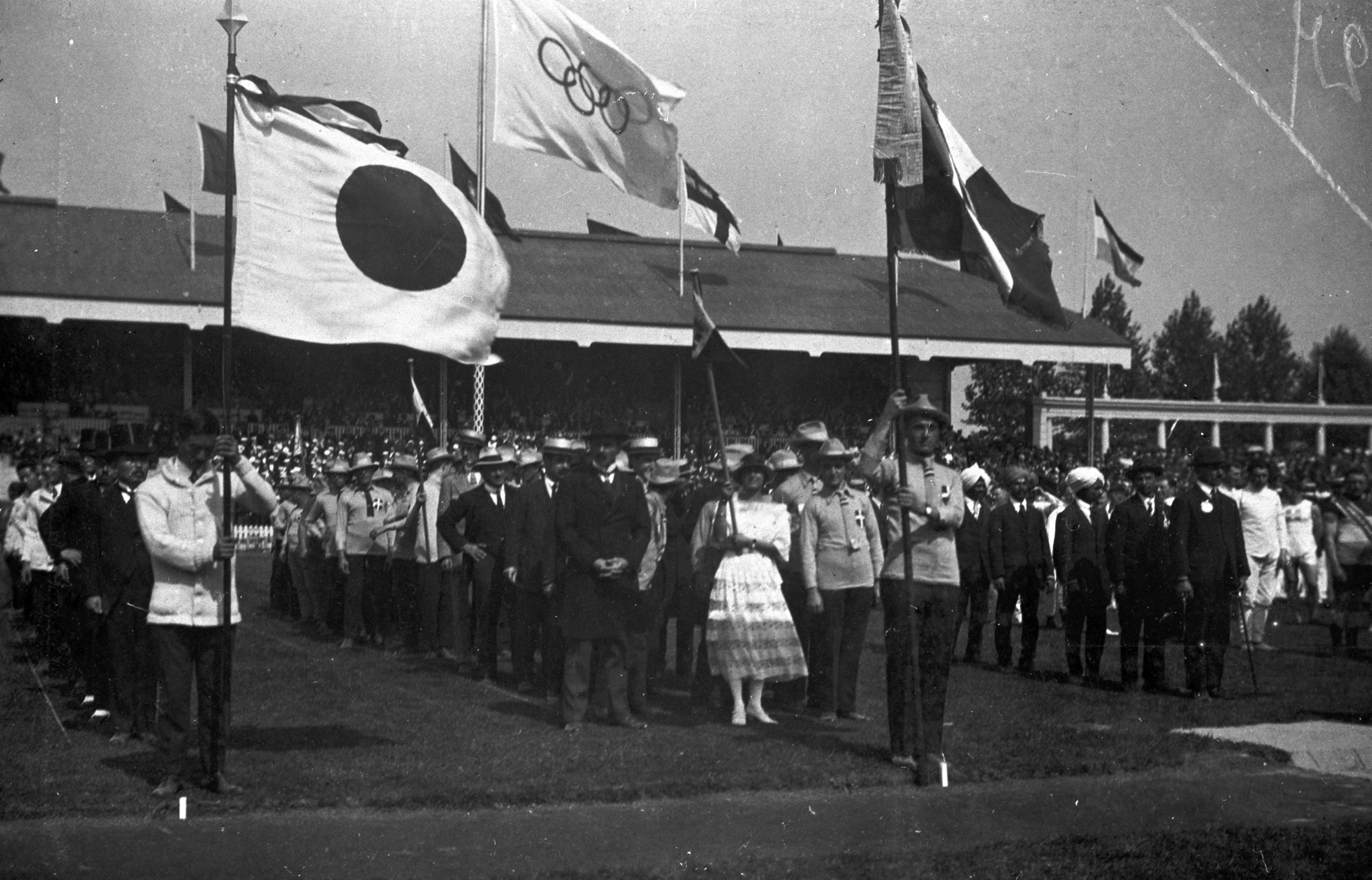 Antwerp 1920: For the first time, the Olympic flag was flown in the stadium for the Opening Ceremony. The concept of Olympic visual identity was born, and over the years this has grown ever stronger, to become one of the most widely known and recognised brands in the world today! © IOC 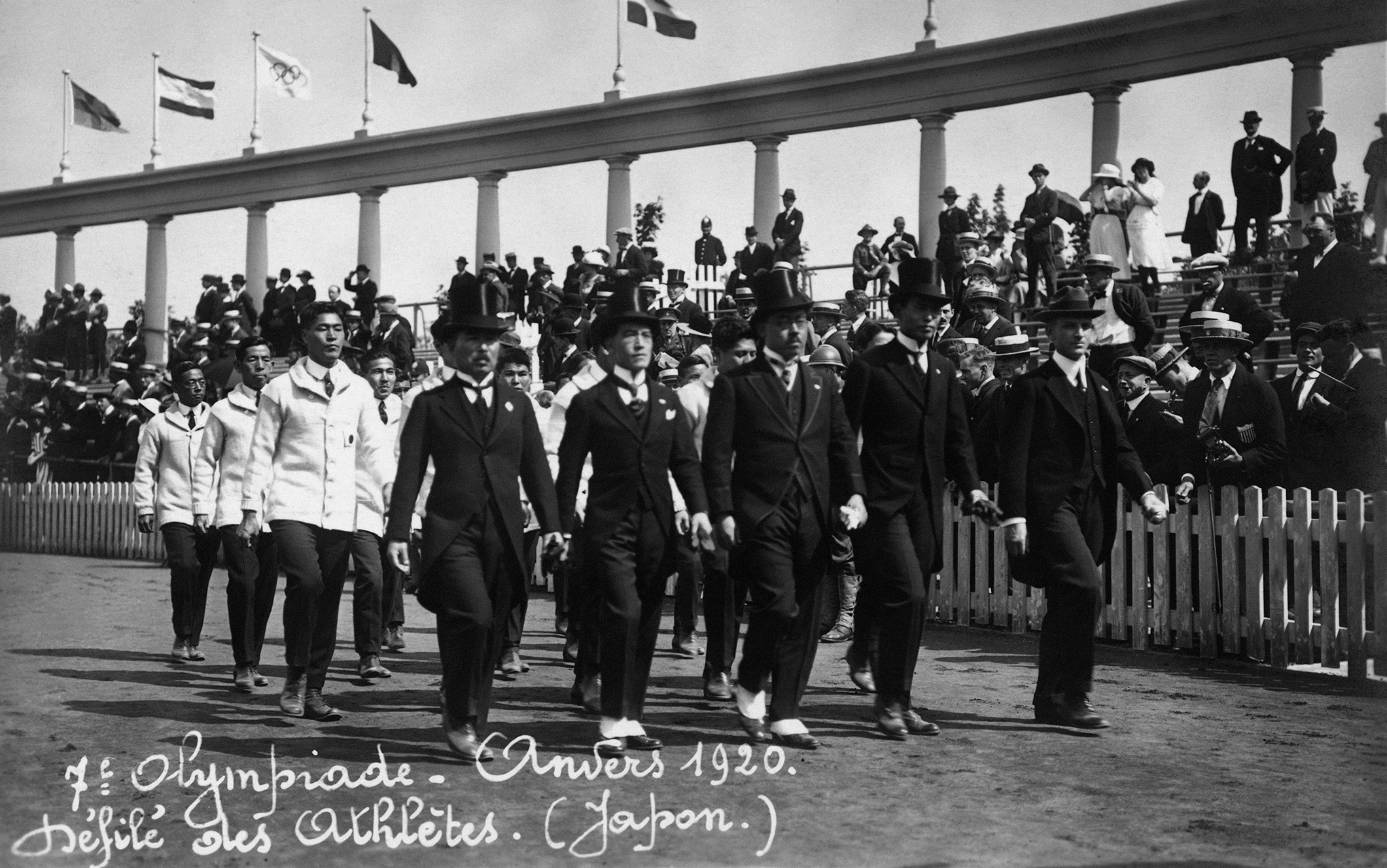 Antwerp 1920: The Japanese delegation with the officials in the lead followed by the athletes, including Olympic champion tennis player Kashio Seiichiro. © IOC

But as Roland Renson states in his book The Games Reborn: The VII Olympiad, Antwerp 1920: “the Opening Ceremony of the Games in Antwerp on 14 August 1920 looked more like a ritual to exorcise the recent war and an invocation for a future of peace.”
Indeed, one soldier from each of the countries taking part marched in holding doves in a cage. These were then released as a symbol of peace.

Antwerp 1920: Soldiers enter the stadium among the delegations. © IOC 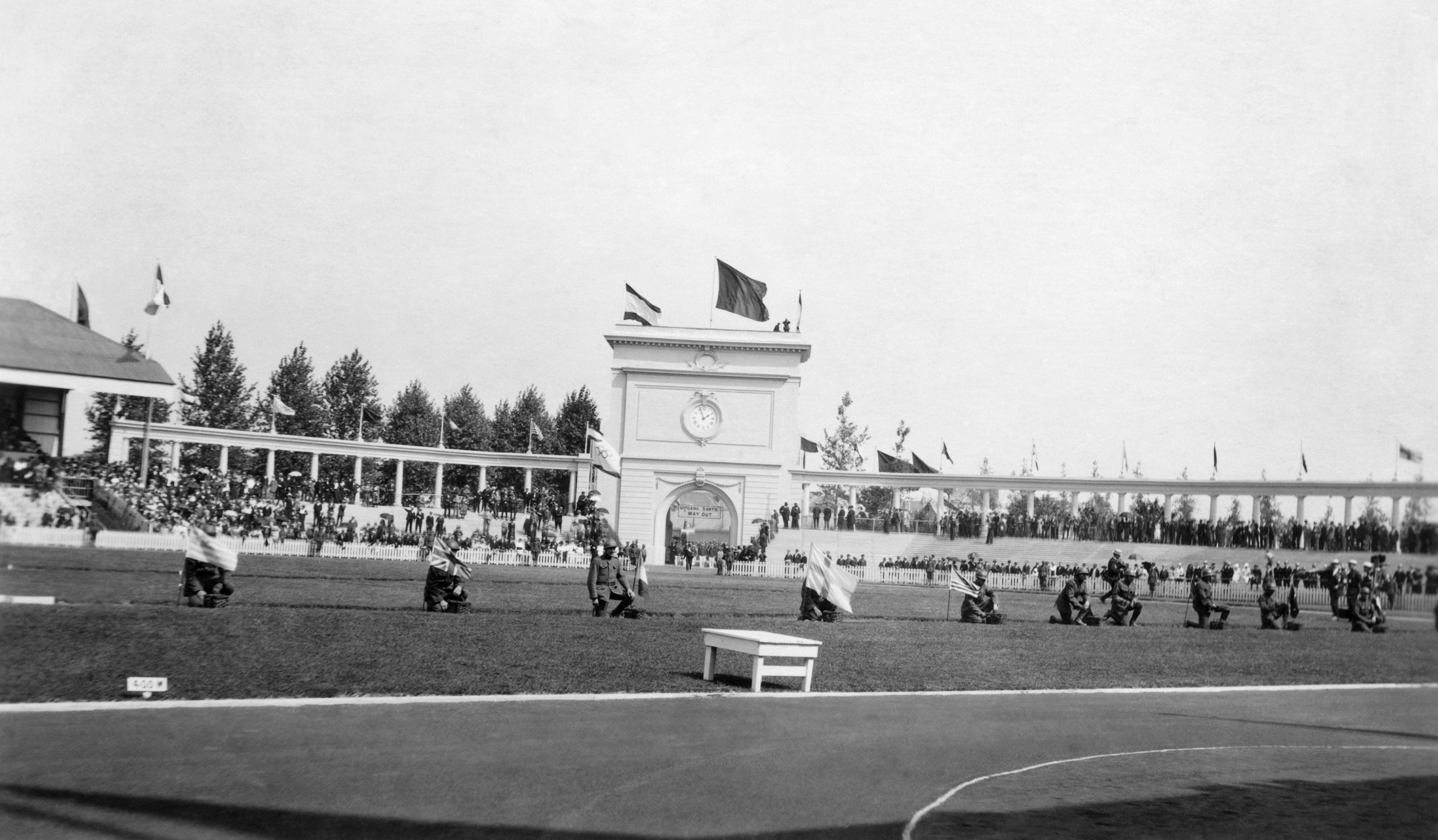 Antwerp 1920: Soldiers are positioned for the release of doves wearing a ribbon in the colours of one of the nations present. © IOC 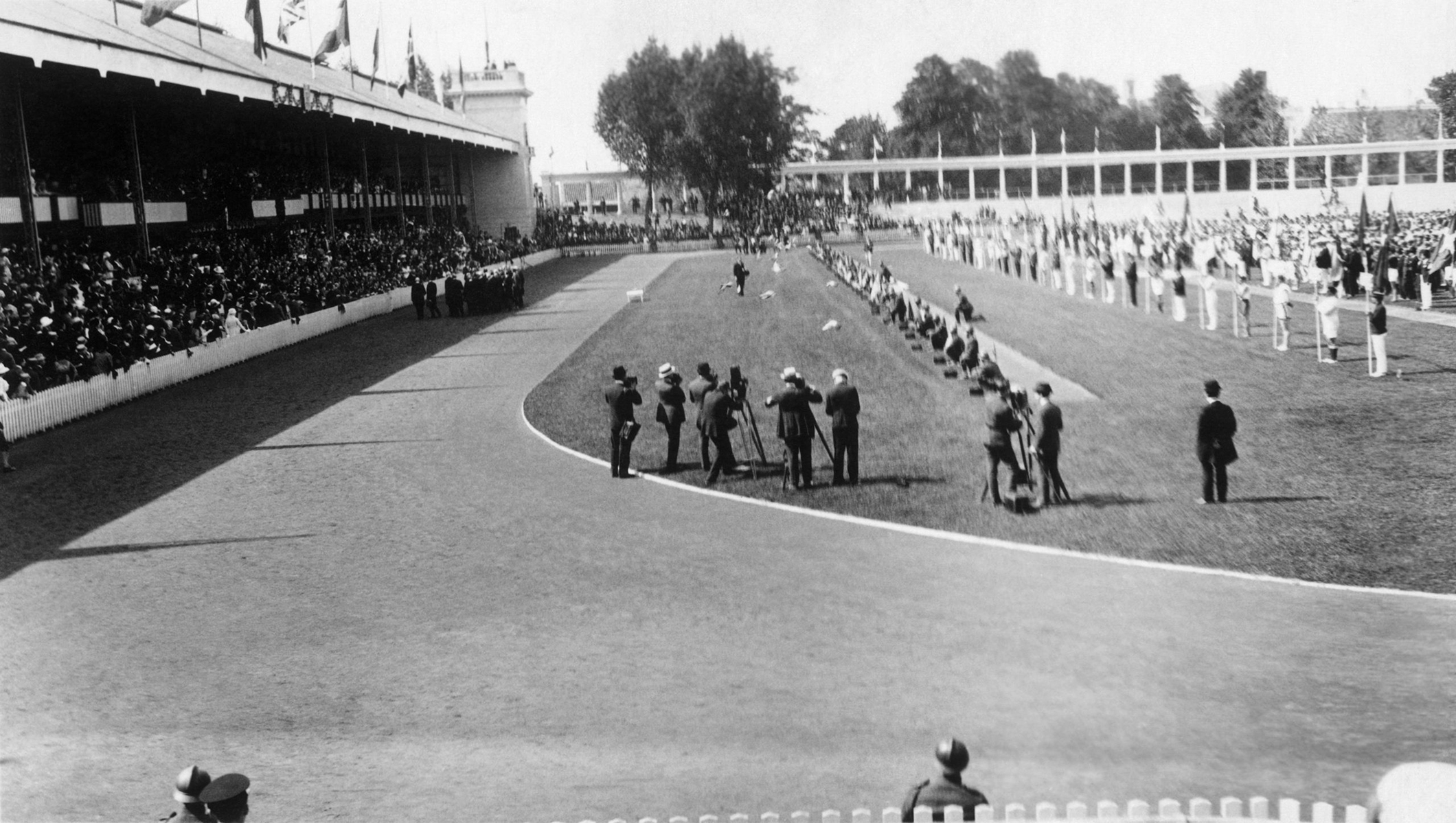 Antwerp 1920: Photographers are in place to immortalize the flight, a symbol of peace. © IOC

A look back at the context in which the Antwerp Games came into being: political and economic rivalries, assassination of the heir presumptive to the throne of the Austro-Hungarian Empire, the Great War, armistice, awarding of the Games to the city of Antwerp, a marathon effort to prepare for the Games and their opening in August 1920!

Like the Olympic flag, the official poster was a means of spreading the message of peace and unity after the war.
The national flags entwined together were a symbol of the alliance of the countries gathered in peace to celebrate the Olympic Games. 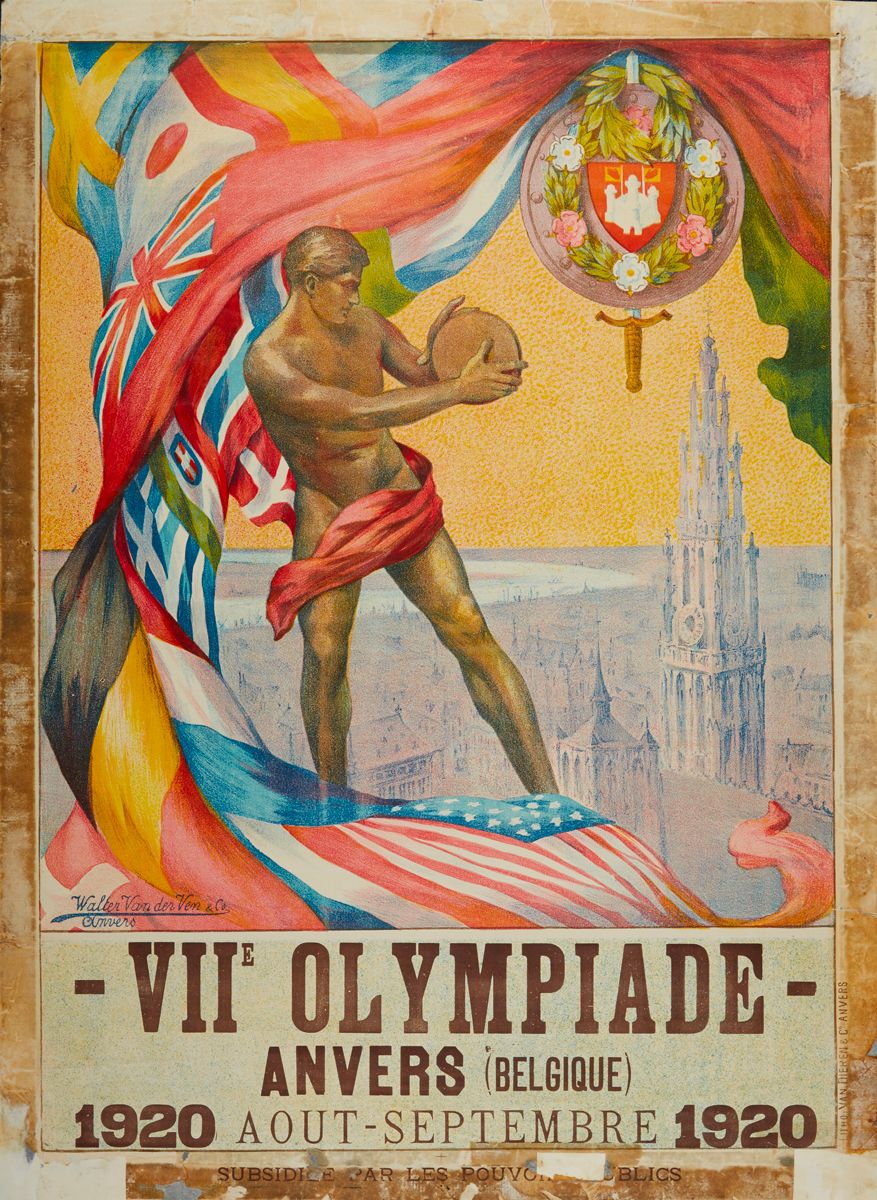 Antwerp 1920: Belle Epoque-style graphic design to announce the so-called “reborn” Olympic Games. A discobolus in the foreground, in reference to the Ancient Games; Antwerp’s main monuments in the background: the tower of Notre Dame, the Grote Markt and the city hall; plus the city’s coat of arms on the top right. © IOC

The cover of the Games programme used the same poster design. 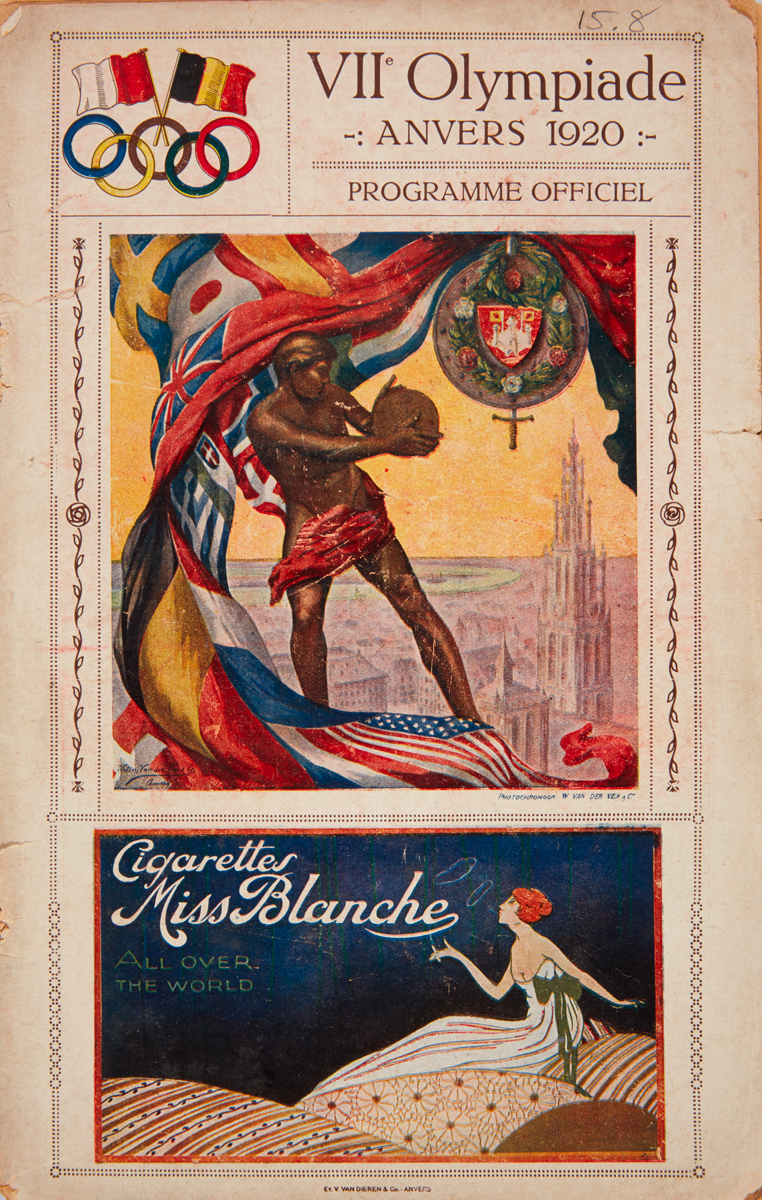 THE STRENGTH OF AN ENDURING SYMBOL

Although the introduction of the Olympic flag and the entwined national flags on the poster for the Games in Antwerp had a special significance in the post-war context of these Games, the symbolism is just as strong today.

Since then it has expressed itself at each Opening Ceremony of the Games by the presence of the Olympic flag in the stadium and that of the flag-bearers of each participating country. 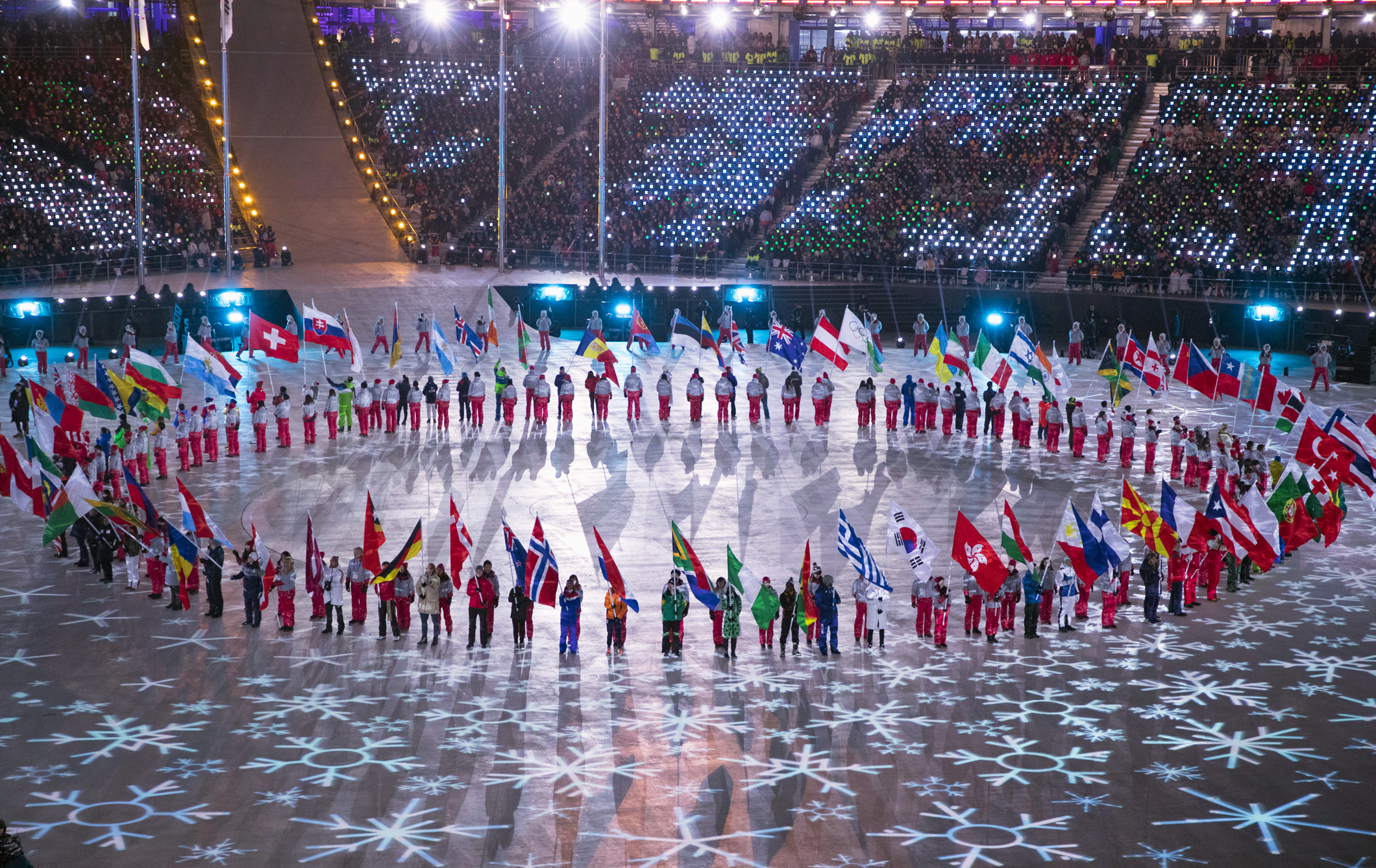