100 YEARS AGO, THE ANTWERP GAMES

A SYMBOL OF PEACE AND UNITY

Following World War, I, the IOC selected Antwerp to host the 1920 Olympic Games. Organisers overcame many obstacles to deliver an edition of the Games that is still recognised for its lasting contributions to sport, gender equality, unity and peace. One hundred years later, as the entire world is fighting the devastating COVID-19 pandemic, the Olympic Games Antwerp 1920 live on as a symbol of post-crisis solidarity and recovery.

There are different ways of re-telling the story of a historical event, and, on this occasion, of celebrating a centenary like that of the Antwerp Olympic Games, which opened on 14 August 1920.

We have decided to tell this story through a selection of artefacts, archive documents, photos and video clips from our collections.
These are media that “speak” particularly well, thanks to the passage of time and the emotion that comes out of them.

THE BIG DAY OF THE OPENING CEREMONY

At the end of the War, the King of the Belgians wore the military uniform showing his rank as head of the armed forces; the officials wore their black three-piece suits and top hats – the only possible choice for such a grand occasion.

In the stands of the Olympic Stadium, many of the 35,000 spectators wore boaters (the men) and cloche hats (the women) – the fashion accessories of the Roaring Twenties. 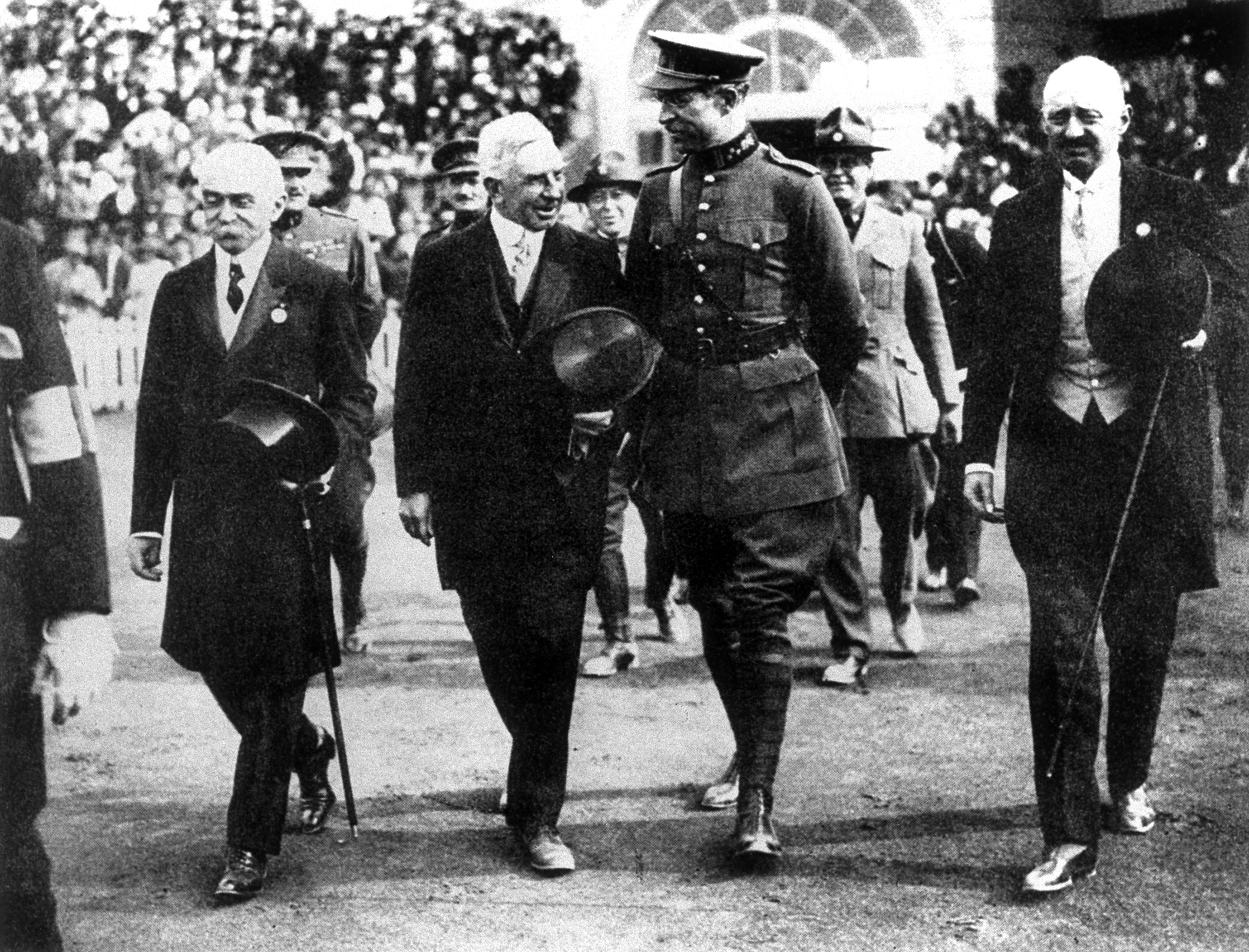 Antwerp 1920: Conversation between King Albert I and Henri de Baillet-Latour, an IOC member, founder of the Belgian Olympic Committee and one of the main organisers of these Games. © IOC 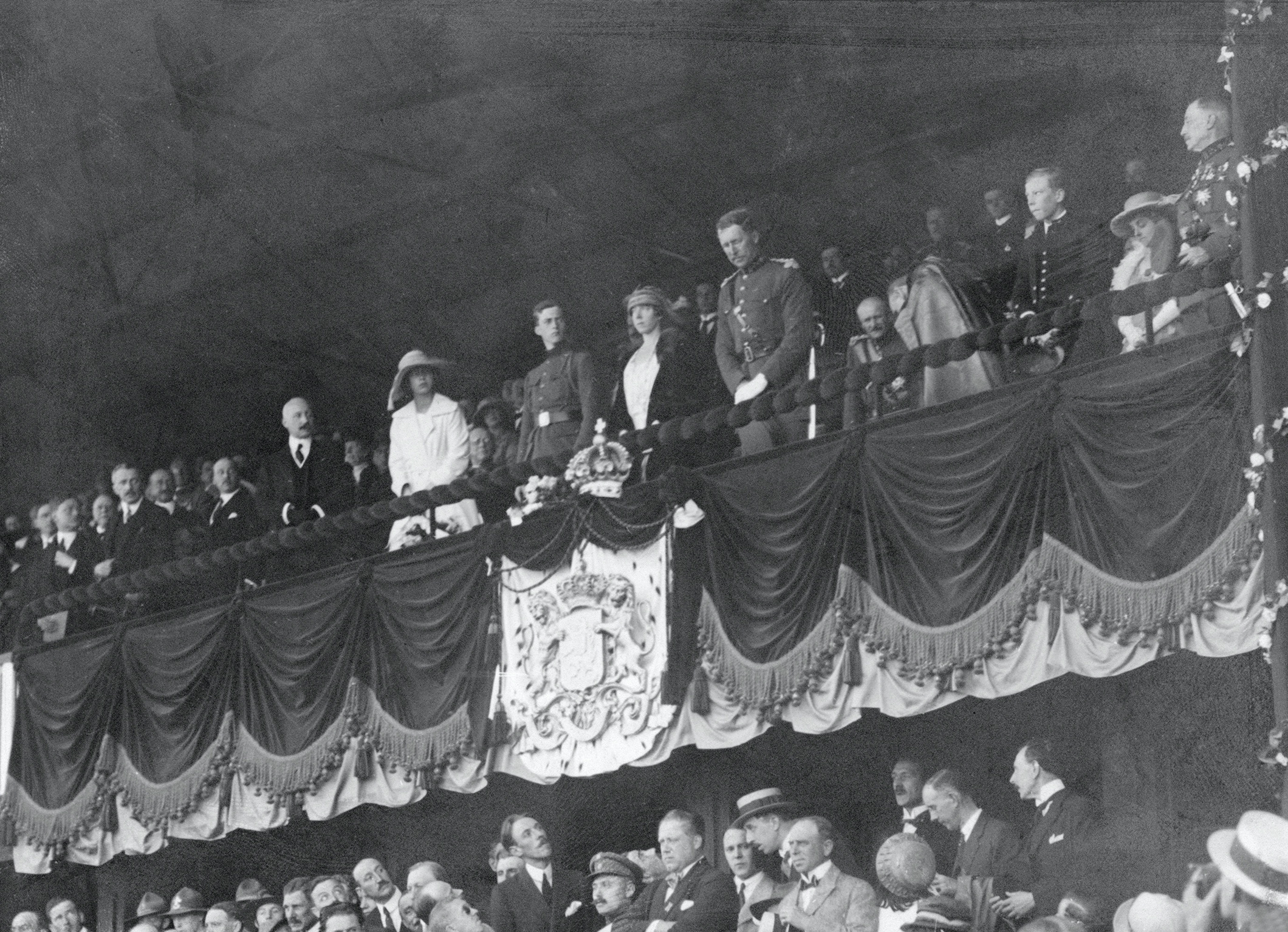 Antwerp 1920: The official stand, with (right) King Albert I and his wife; and (left) Henri de Baillet-Latour. © IOC

Antwerp 1920: The King with his wife and Pierre de Coubertin. © IOC

THE ATHLETES’ PARADE: THE HIGHLIGHT OF THE CEREMONY

This ceremony was not organised at the first Games of the modern era in Athens in 1896. It was established 12 years later, at the London Games in 1908. Protocol dictates that the delegations march in alphabetical order of the host country’s language, except for the Greek delegation, which opens the parade in a nod to the roots of the Olympic Games, and that of the host country, which brings up the rear. Each delegation is preceded by sign bearing its name and flag.At the Antwerp Games, the parade included 29 delegations and was more than ever a strong symbol of peace and unity between people in this post-War period.

Antwerp 1920: The delegations marching in the parade. © Pathé Film&Universal Studios 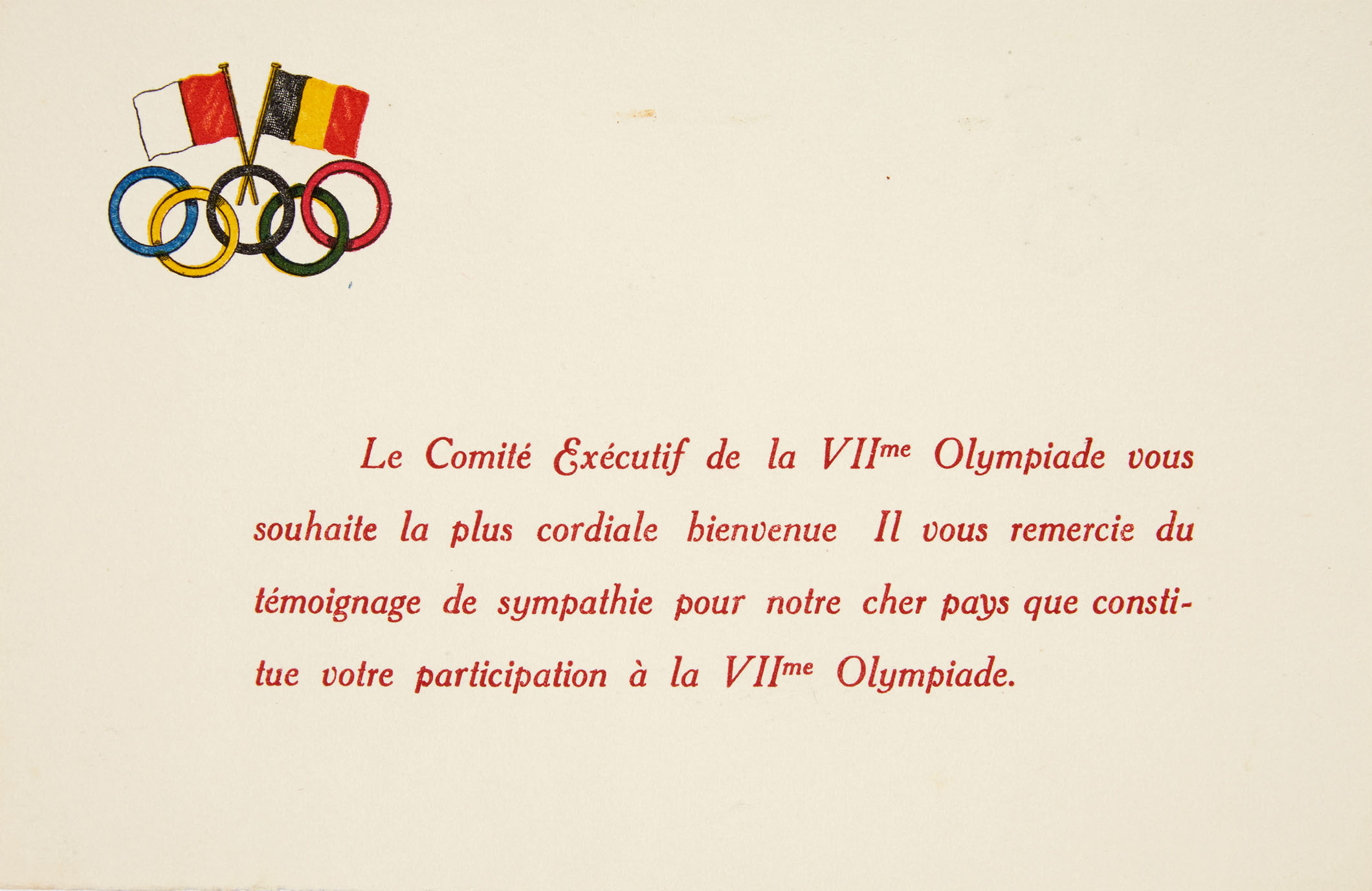 Antwerp 1920: Welcome card from the Games Executive Committee to the delegations and National Olympic Committees. © IOC 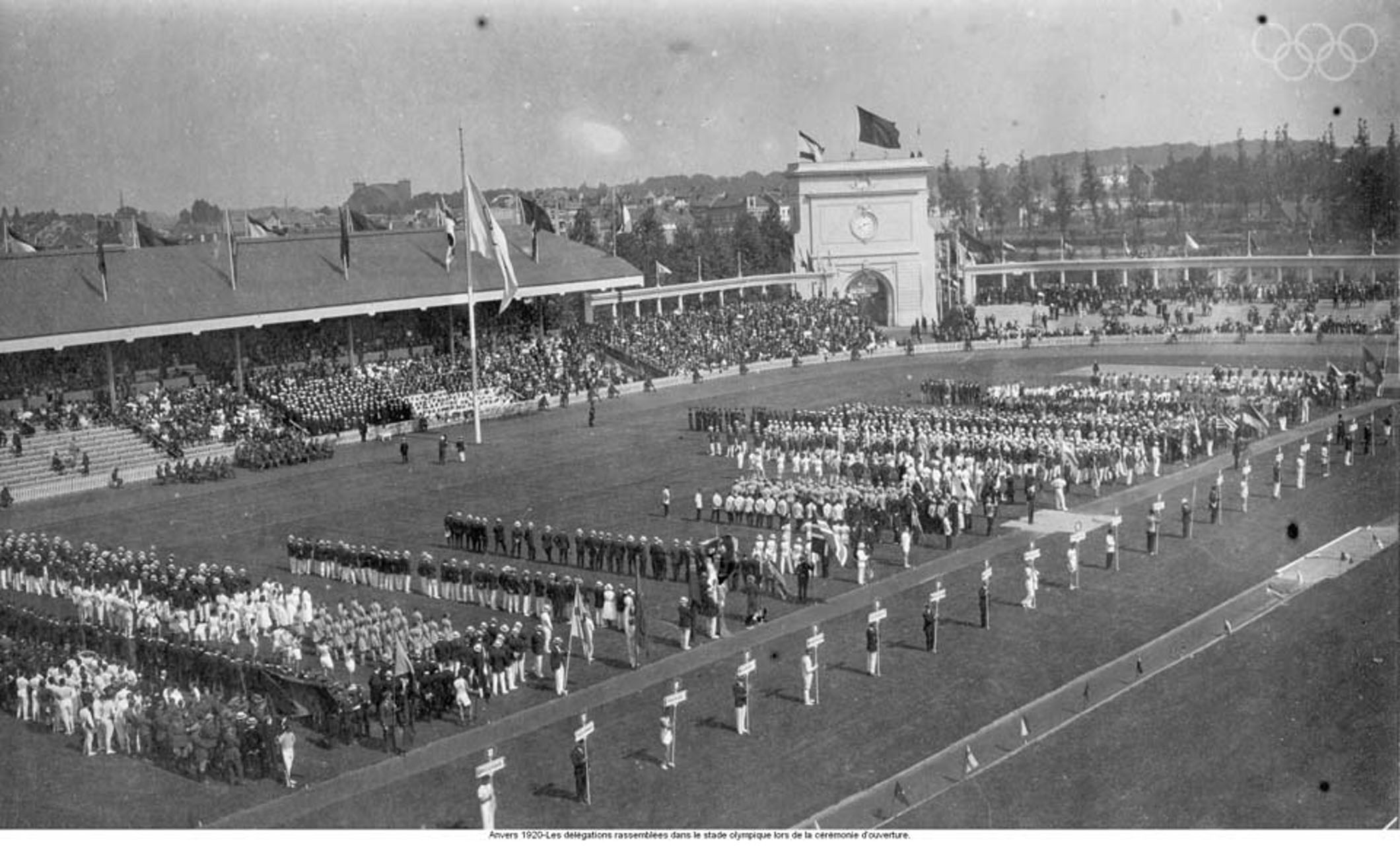 Antwerp 1920: After the parade, the 29 delegations lined up in the Olympic Stadium. © IOC

THE INTRODUCTION OF RITUALS THAT BECAME TRADITIONS

Read the article on our blog on these firsts.

In his book “Autour de la VIIe Olympiade”, Pierre de Coubertin described behind the scenes of the Games and his perception of the event that had just taken place. He underlined the innovations featured at this edition, and the athletes’ enthusiasm for this new five-ring flag, which would later become one of the most well-known and recognised brands in the world. 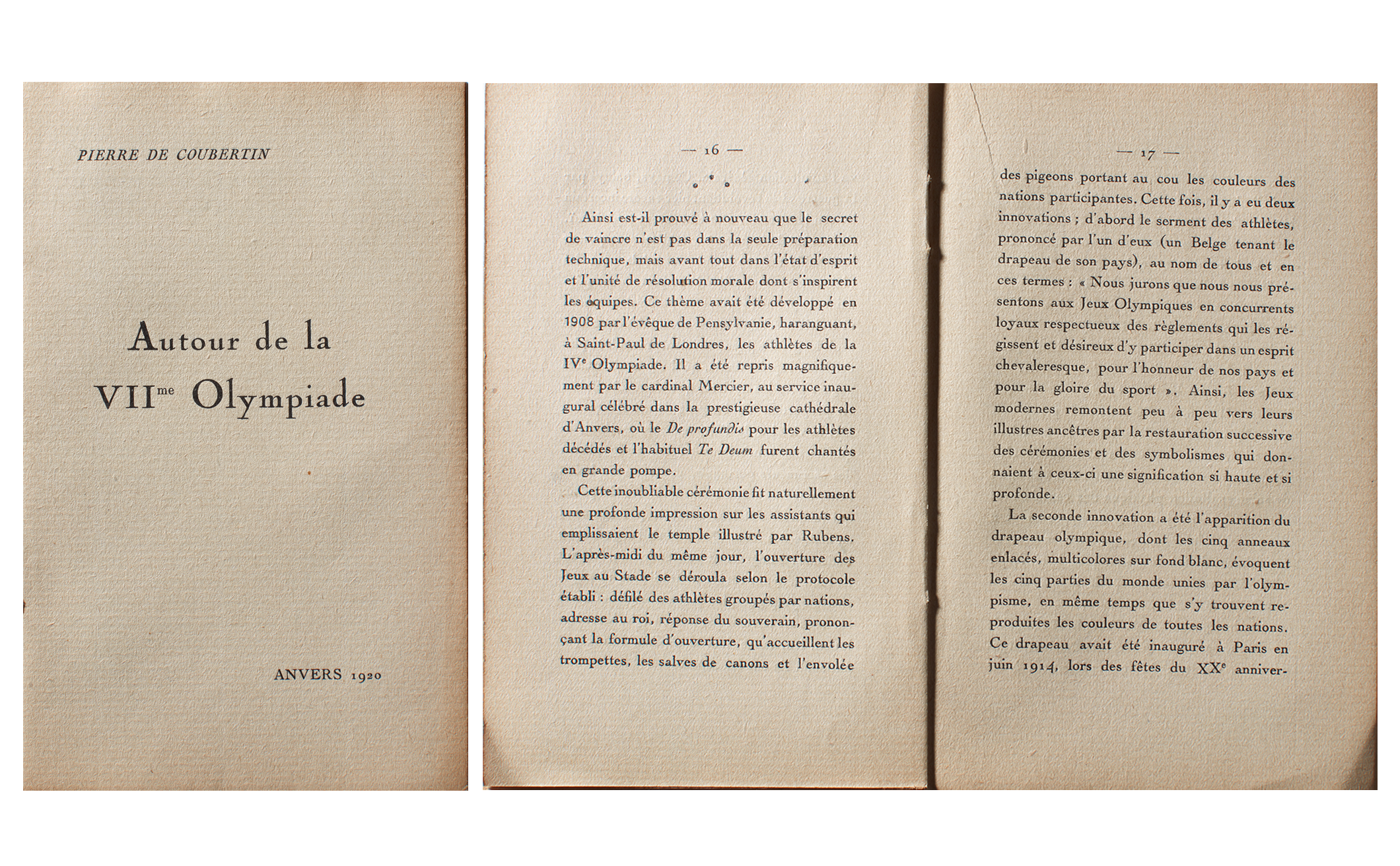 Short book written by Pierre de Coubertin: cover page and page on which he speaks about innovation. © IOC

“[…] This time, there were two innovations: first the athletes’ oath, taken by one athlete (a Belgian holding his country’s flag) on behalf of them all […]

[…] The second innovation was the appearance of the Olympic flag, featuring five interlaced rings, multicoloured on a white background, evoking the five parts of the world united by Olympism, along with the colours of every nation. This flag was unveiled in Paris in June 1914, at the celebration of the 20th anniversary of the re-establishment of the Olympic Games, but it has not yet been part of a celebration of an Olympiad.”

One of the pieces of the flag made by the Parisian store “Bon Marché” in 1914 at the request of Coubertin. ©IOC

“In Antwerp, the joyful reflections [of the Olympic flag] shimmered everywhere, and its success was great, so great that, one night in the city, a group of athletes tried to pull off a daring raid in order to take home this tangible souvenir of the VII Olympiad. Unfortunately, the police were watching: arrests, reports, consular intervention, etc.

It goes without saying that that was not the only incident. There were others, but do we think that in Olympia, in past time, things took place without arguing or fighting? How could one unite, in order to live together in an existence of healthy physical exaltation, hundreds and hundreds of young people belonging to peoples many of whom, still yesterday, looked at each other in an odd way, without, here and there, not a too salty word or a slightly abrupt gesture springing forth?

In 1920, the Antwerp Olympic Games brought together 29 nations and 2,626 athletes (including 65 women) who competed in 156 events in 22 sports, with some new developments! Read the article on this topic on our blog.

They all returned to their respective countries with memories of an unforgettable experience, along with a diploma and one or more medals, unique and precious awards of their career. 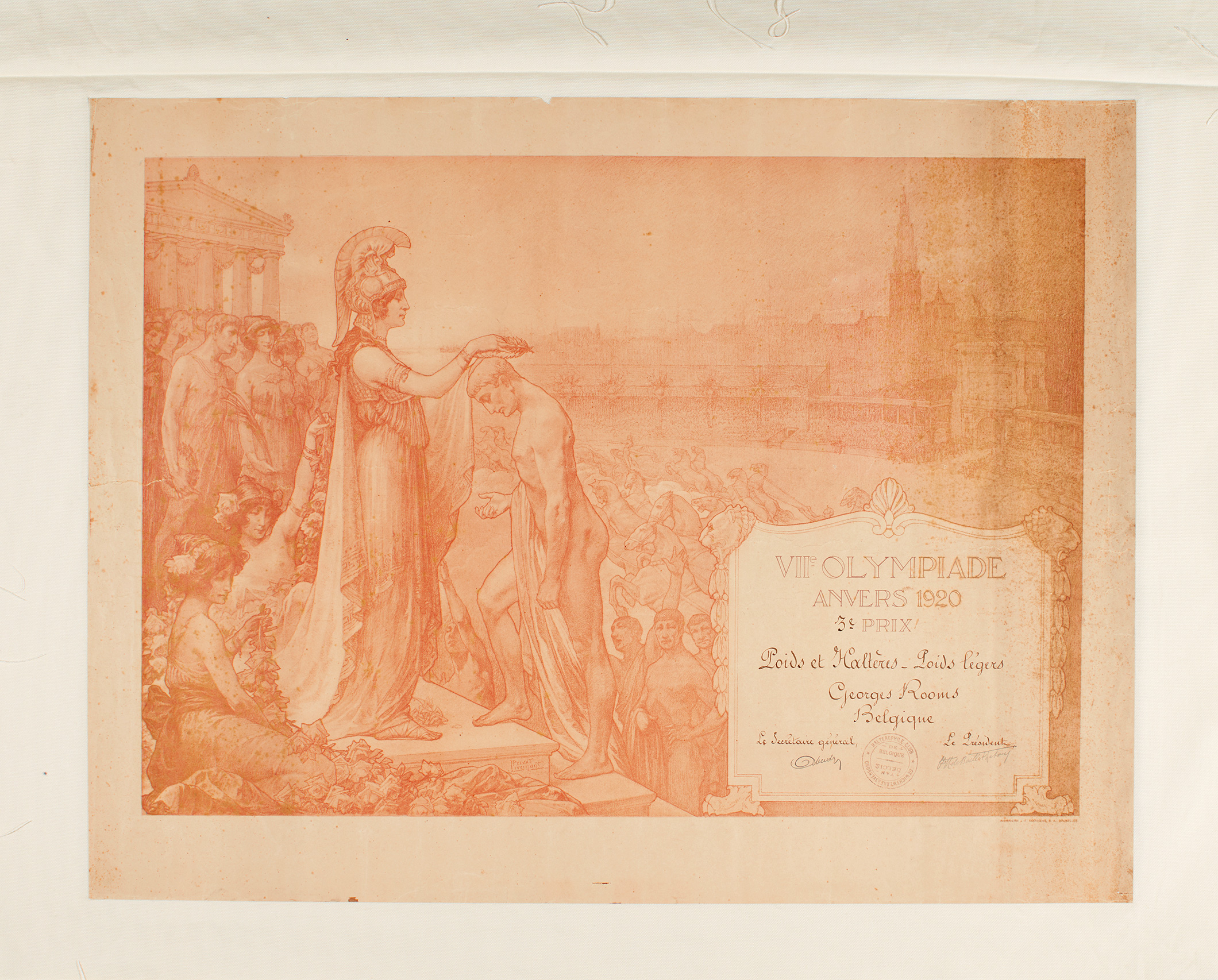 Some 1,350 copies of this diploma were distributed to the winners, and also to some non-ranked competitors who achieved an outstanding performance. 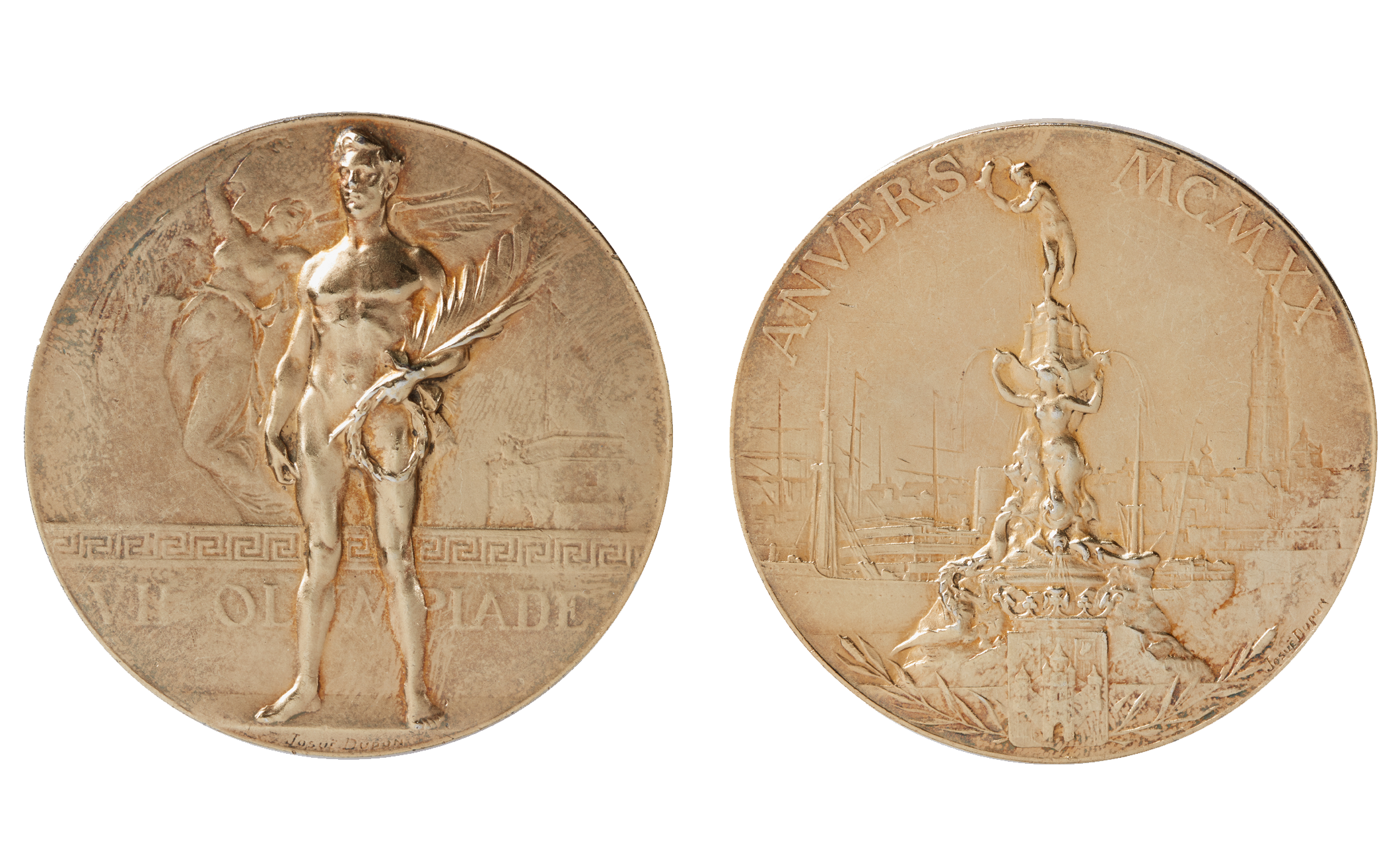 On the obverse was a naked athlete, holding in his left hand a palm leaf and a laurel crown, symbols of victory. Behind him was the figure of the goddess Pheme playing the trumpet. In the background was a frieze with a Greek motif featuring the inscription “VII OLYMPIADE” underneath.

On the reverse was the Antwerp monument, commemorating the legend of Brabo throwing into the Scheldt the hand of the giant Druoon Antigoon, who had been terrorising the river. In the background was the cathedral and port of Antwerp. In the top half was the inscription “ANVERS MCMXX”. 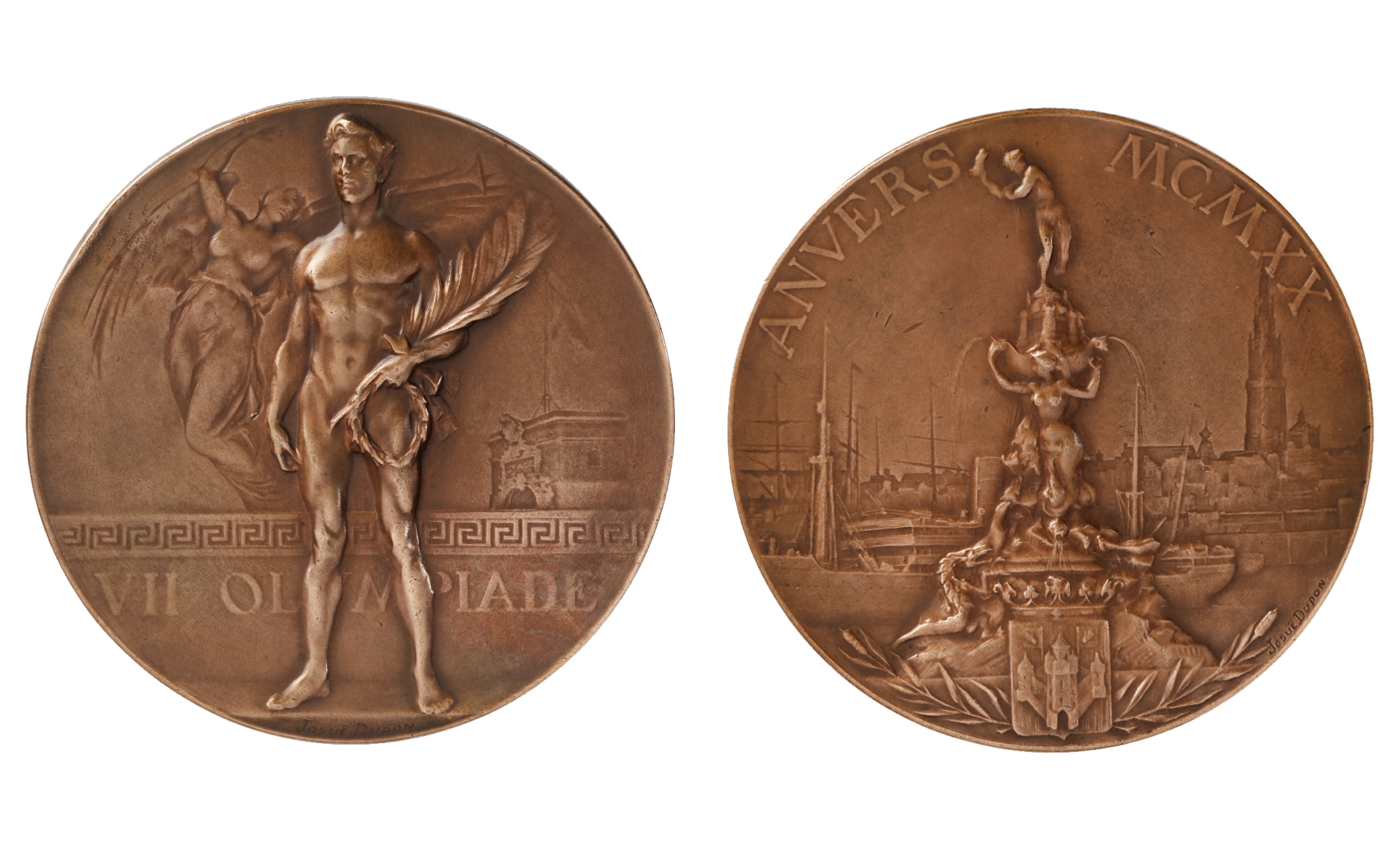 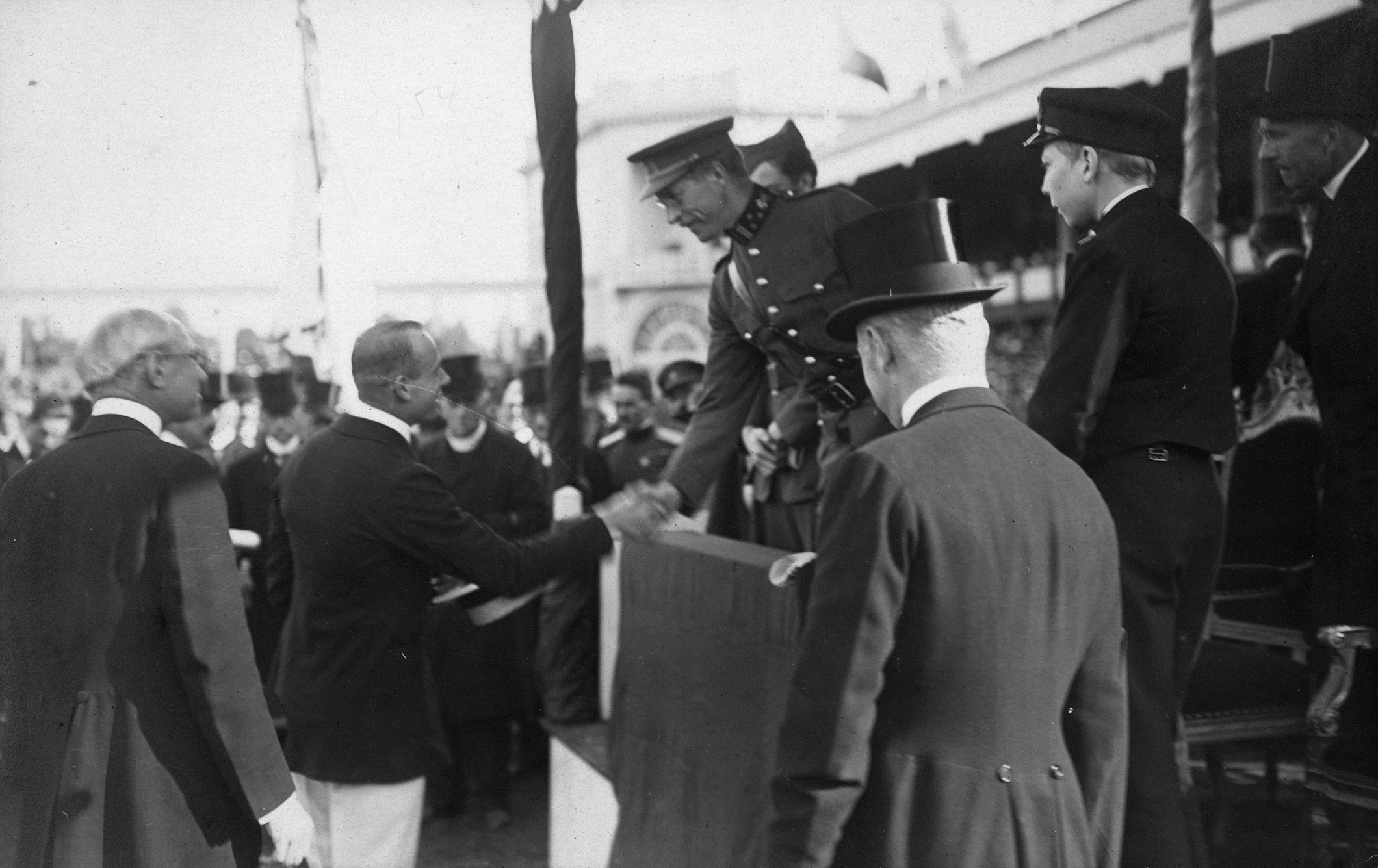 THANKS AND CONGRATULATIONS TO THE ORGANISERS

In a large leather visitors’ book, the IOC members wrote of the success of these Games, and expressed their gratitude to the organisers:

“The members of the International Olympic Committee gathered in Lausanne recall with joy the wonderful Antwerp celebration and note the magnificent results achieved by this celebration in this host city of the Games of the VII Olympiad, expressing to their colleague and friend, Henry de Baillet-Latour, their admiration and gratitude for the energy, steadfastness and skill with which he chaired the organisation of the Olympic competitions and celebrations in 1920 – Lausanne, May-June 1921.” 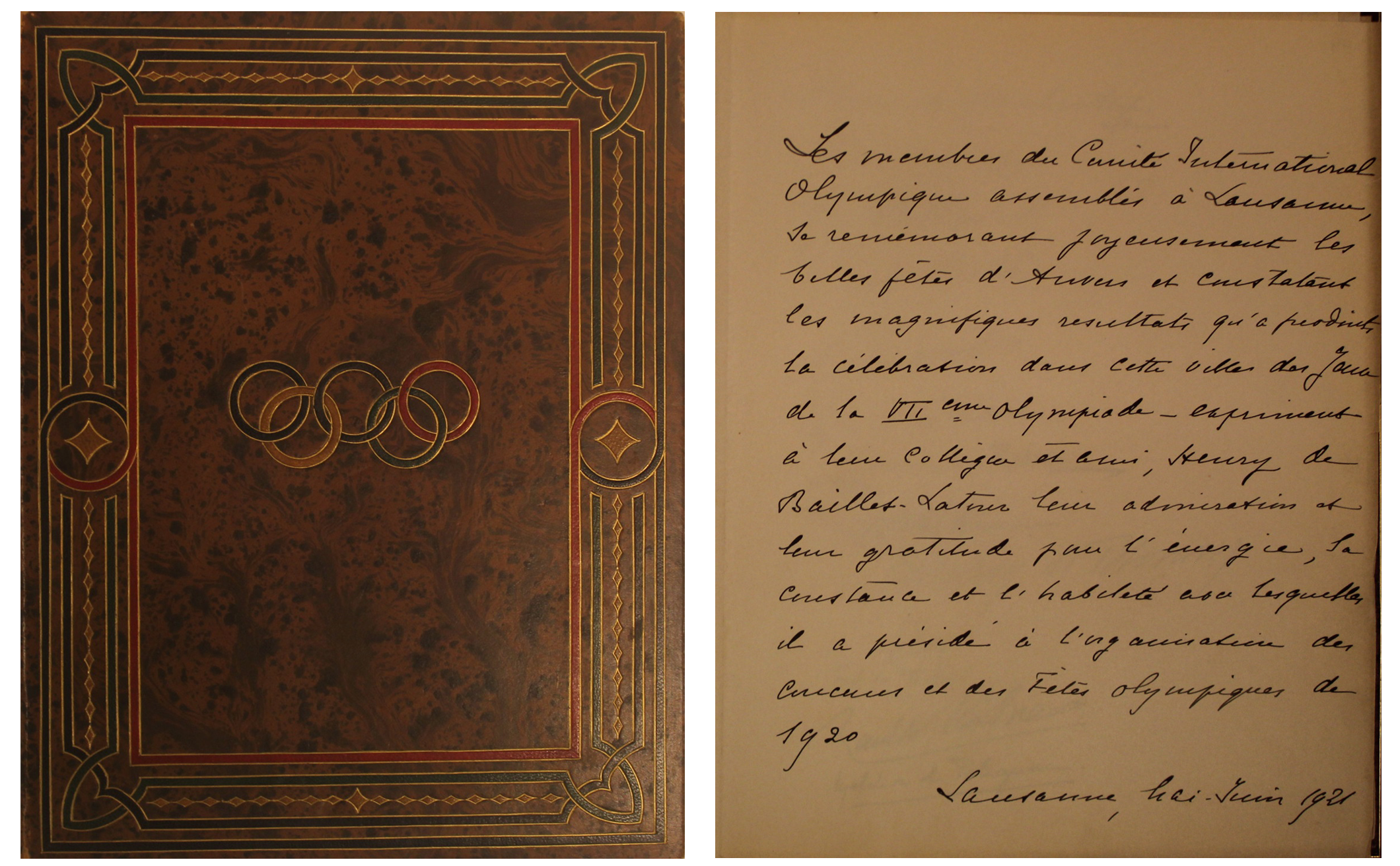 Cover of the album and page of text. © IOC

Pages of signatures and back of the album. © IOC

First page of signatures, in order:

Second page of signatures, in order: 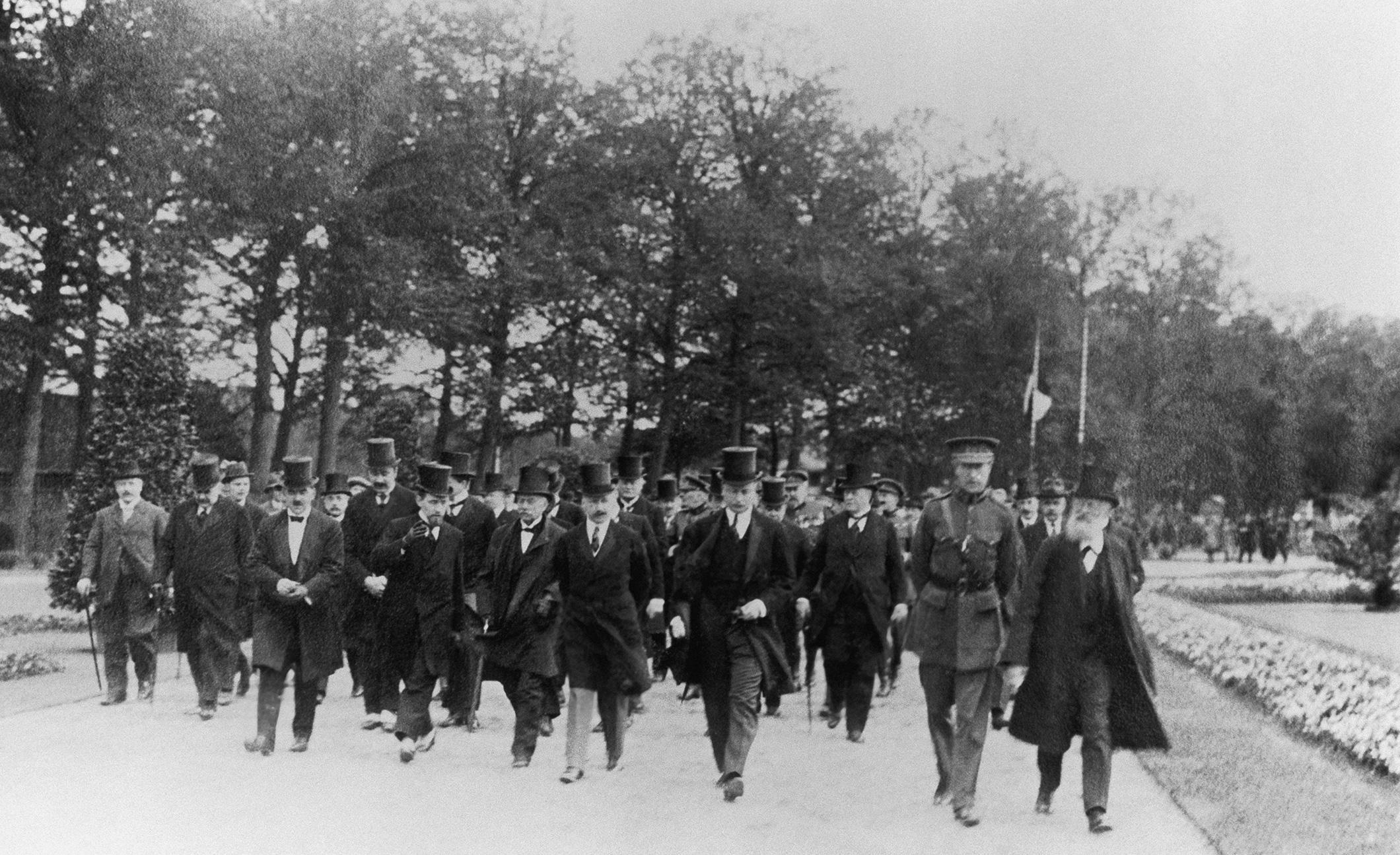 Recalling the past by celebrating the centenary of the 1920 Games in Antwerp 1920 is also a way of looking back at the inspiring moments of the past, and the emotion and excellence of the Olympic Games. Today, with one year to go before the Olympic Games Tokyo 2020, we are living in an important time, with a new journey to embark upon before we can all come together and celebrate!